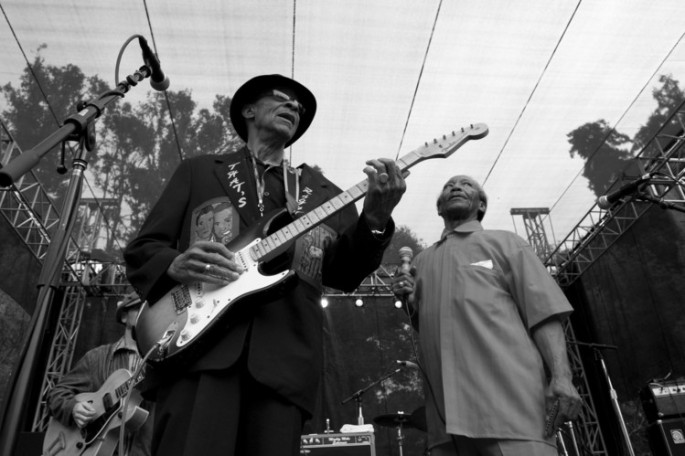 Pinetop Perkins, Willie ‘Big Eyes’ Smith and Hubert Sumlin played with the greats, and this documentary hopes to give them the recognition they deserve.

A kind of blues song in its own right, “Sidemen: Long Road to Glory” is an affectionate attempt to showcase three major figures in the development of Chicago blues, musicians who spent their entire lives eclipsed by the oversized stars they played with—namely, Muddy Waters and Howlin’ Wolf. Yes, pianist Pinetop Perkins and drummer Willie “Big Eyes” Smith finally won a competitive Grammy in 2011, at the ages of 97 and 75, respectively. Hubert Sumlin, whose guitar-playing influenced every rocker including Jimi Hendrix, never got one at all. Their movie took about 10 years to make and release, at which point several principal characters—including the three subjects of the film—had passed away. If the term “sideman” implies being shortchanged on the long road to glory, this documentary certainly makes its point.

But director Scott D. Rosenbaum also revisits, somewhat incidentally, one of the more remarkable stories of 20th-century America, or of cultural revolutions anywhere: the midcentury mass migration of African-Americans from the rural South to factory cities in the northern Midwest, and the translation of their music—rustic delta blues developed out of plantations, refined from field hollers and arhoolies—into a popular hybrid so insistent and influential that it altered all things musical that followed. Today’s pop-cultural world is unimaginable without the sound these men made on Chess Records (no Beatles, no Rolling Stones, no Jack White, no punk, no grunge, etc.), and it was the work of people who came out of nowhere and nothing. And fulfilled their own brand of American dream.

Mr. Rosenbaum is far less concerned with social history than with his instrumentalists’ influence on the young, or in many cases not so young: Bonnie Raitt, Eric Clapton, the guitarists Warren Haynes and Joe Bonamassa, the late Johnny Winter, the late Gregg Allman, Derek Trucks and Susan Tedeschi. The three principals, too, appear on camera, but by the time Mr. Rosenbaum got to them they were either talked out or tired out—the best stories come from elsewhere, sometimes told with the help of animation.

Narrated by Marc Maron without any of his customary wryness, “Sidemen” tells some colorful stories: How Mr. Perkins started out playing “juke joints, fish fries and brothels”; how Mr. Sumlin literally fell into the lap of blues legend Wolf—who would become his surrogate father and lifelong musical partner— as a curious kid peeking in the window of a Mississippi roadhouse. It’s with Wolf (a.k.a Chester Burnett ) that Mr. Sumlin will forever be associated; the other two men, while more itinerant, are best known for their work with Waters (McKinley Morganfield). It’s a little sad that Waters and Wolf, the twin pillars of the Chicago blues, manage to dominate “Sidemen,” just as they did their music and their musicians. When the two died in the mid-’80s, their sidemen had nowhere to go. How these three pulled out of their respective tailspins often feels like good material for a song, if not always quite enough for a movie.