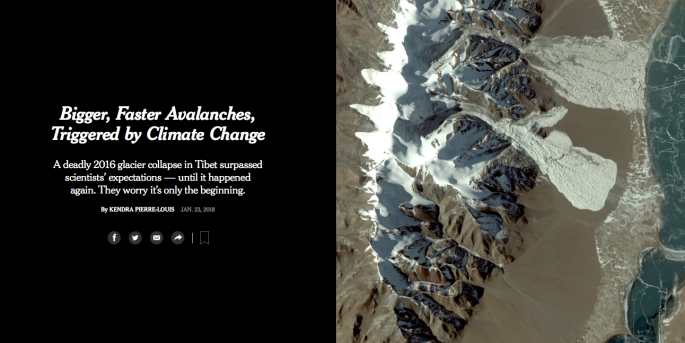 When 247 million cubic feet of snow and ice collapsed off a glacier in the dry, mountainous region of western Tibet in 2016, the roiling mass took with it nine human lives and hundreds of animals, spreading more than five miles in three minutes at speeds of up to 186 miles per hour. The event surprised scientists, who had seen a collapse that big and that fast only once before.

And then it happened again, three months later, on a neighboring glacier, though without fatalities. Glaciologists hadn’t quite believed that glaciers could behave this way, and suddenly they had witnessed two similar collapses in a year.

An analysis of the events, published this week in the journal Nature Geoscience, found that climate change was the culprit in both collapses. The study suggests that in addition to the known risks posed by a warming climate, such as sea level rise, we may also be in line for some cataclysmic surprises.

To understand what the researchers found, it helps to know that generally there are two kinds of mountain glaciers: flat and steep. When a flat glacier collapses, it can move a lot of snow and ice, but in slow motion. These “surges” can last weeks and even years, but move no more than a few hundred feet a day.

Steep glaciers appear perilously affixed to mountain walls, and when they do collapse they create avalanches with speeds up to 250 m.p.h. Those avalanches may imperil mountain climbers, but over all they don’t move as much snow and ice.

In Tibet, however, researchers saw a frightening hybrid of the two. “It was a flat glacier, but it produced speeds of up to 300 kilometers per hour,” or 186 m.p.h., said Andreas Kääb, a professor of geosciences at the University of Oslo in Norway and lead author of the study.

On top of the speed, each of the collapses moved enough snow and ice to fill one million freight train cars stretching 7,500 miles, Dr. Kääb said. That’s roughly the distance between New York City and Shanghai.

The only other comparable event scientists have recorded was the 2002 collapse of the Kolka glacier in the Caucasus Mountains. That collapse tumbled eight miles downriver, reaching speeds of 179 m.p.h. and killing more than 120 people in the North Ossetia region of southwestern Russia.

The glacier after the second collapse in Tibet in September 2016. Credit Lide Tian