“Fate has never ladled out hardship very evenly, and this frequently trips our often infantile sense of justice.” — Jim Harrison

“We Americans are trained to think big, talk big, act big, love big, admire bigness but then the essential mystery is in the small.” -Jim Harrison 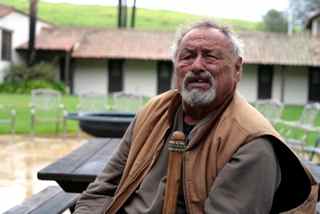 During my teenage years Joyce and Hemingway drove the train. In my twenties Thomas Wolfe and Marguerite Yourcenar came on board along with Proust, Flaubert, George Eliot, Pynchon and Nathaniel West. But sometime in my thirties I discovered Melville and Jim Harrison. After living many years abroad, they brought me home. One, long deceased, got me there by sea, the other, very much alive, guided me deep into the North American heartland. Both were poets who also wrote prose. Melville’s Ahab cautioned that “The truth shall drive thee mad.” But Jim rested by a river to say, “Love doesn’t conquer all, but it conquers a lot.”

So when Will Hearst invited me to San Francisco to meet Jim three years ago I was excited — and nervous. They were going to make a film about Gary Snyder. Will thought I would be a good choice to direct it but we needed Jim’s approval. Jim flew in from Montana and I was summoned all the way from Spain. The meeting occurred over dinner at a place we each knew well by then, also thanks to Will, the Zuni Café on Market Street. I arrived early and waited at the bar with a glass of wine until the two men came in, turning many heads as they did so. It was basically a Dockers meets Eileen Fisher crowd and these two gentlemen stood out considerably. Will favors an old-world sort of elegance not seen much these days, a la Gary Cooper as Frank Flanagan in Billy Wilder’s Love in the Afternoon. Jim, his one good eye wandering, his deep Upper Michigan Peninsula voice thundering, carried a large American Indian walking stick and wore outdoorsman clothes. Nothing was pressed and all of it was made in the USA, including the leather button-less vest he wore over a T-shirt and the wide, rugged, large-pocketed sport coat.

We were seated immediately. They were fussed over by the wait staff and then the owner. An educated wine discussion took place well over my head and two different bottles of Burgundy were ordered. It was taken for granted the signature roast chicken dish would be the way to go for the three of us. During all of this I did my best to smile and toss in a few positive/humorous comments neither of them paid much attention to. Then, after the first bottle was inaugurated Jim turned to me and said, “So John, why do you live in Spain? Is it for the women?”

An hour later I realized I’d never been grilled with such grace and charm. Apart from Will’s vote of confidence I said two things I suspect helped seal the deal. The only other film I’d made was a documentary about Federico García Lorca, one of Jim’s favorite poets (along with Antonio Machado and Rene Char). He asked me what it was I most liked about Lorca and I said, “His toughness. So many people who read him and who do his plays project sticky sentimentality onto the man, but he was one tough writer with a brilliant mind.” I hoped Jim liked this because he didn’t add anything. Then at one point I took the risk of proclaiming that the only other restaurant I’d been to with roast chicken as good was in Paris at the Rotisserie du Beaujolais, which, it turned out, was one of his favorites. By the time a third bottle was opened he put his hand on my forearm and said, “You’ll do just fine.”