Archers indulge in a raucous competition, cheering teammates and jeering opponents. Here archers celebrate with a ritual dance after a teammate hit the narrow target.

The host of the Winter Olympics, South Korea, excels in the summer game of archery. They grabbed gold medals in all four categories in Rio.

But the tiny Himalayan kingdom of Bhutan may be less than awed. Bhutan claims archery for its national sport, and archers pay no heed to the plunging temperatures of winter when they compete propelling arrows across a field.

And if you think of archery as a decorous game, think again. 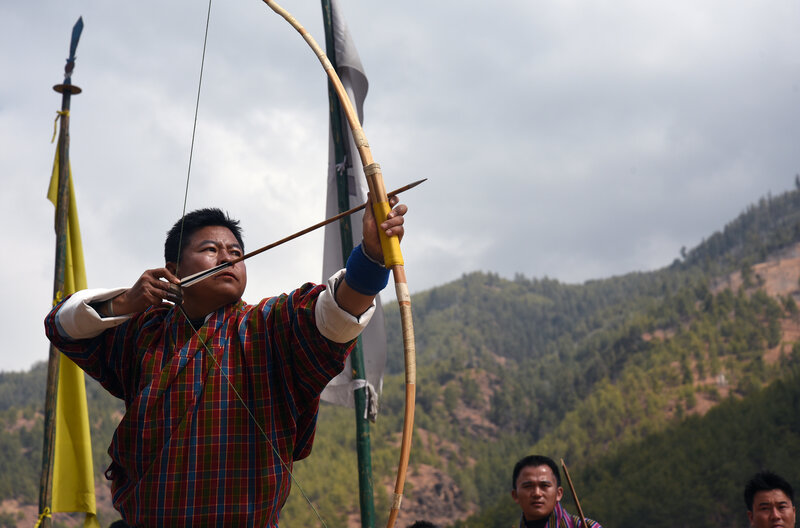 A Bhutanese archer draws and releases. Contestants must propel an arrow across a field that is 140 meters (460 feet) long, twice the distance of the range used in the Olympics.

In a recent tournament in Bhutan’s capital Thimphu, archers competed with full-throated abandon. They hooted and hollered their way through the competition, encouraging their teammates, and deriding their opponents, marrying gusto and ritual.

With every arrow that hits the mark, Bhutanese archers line up, face the target, and break out in a traditional song and dance.

Contestants say this recent competition was in honor of the country’s 2-year-old royal prince, whose parents are Bhutan’s glamorous young king and queen.

Legend has it that the father of the first king used his archery skills to vanquish a general of invading British forces in 1864. Judging by the competition underway, mastering those skills is no mean feat.

Archer Yeshey Norbu stands under a carved wooden canopy and through an interpreter describes the game. Half the members of each team shoot, while those not shooting gather on the other end of the field around the small target. It’s festooned with streamers of different colors, which archers wave back at their teammates to signal where their last arrow landed.

Norbu explains that, “You score one point when the arrow is very close to the target, at an arrow’s distance.” Interestingly, there are evidently no referees in Bhutan’s game. “You score 2 points when it’s a hit. You score 3 points if you hit the bull’s-eye,” he says.

The first team to reach 25 points wins the game.

The target is a narrow board, and the length of the field makes hitting it all the more remarkable. When an archer lets loose an arrow, it must travel 140 meters (460 feet) — twice as long as the range used in the Olympics.

On the sidelines, archer Uygen Thinley ponders that difference. Speaking in a mixture of English and Bhutan’s native Dzongkha, he borders on disdain. When an Olympian hits the mark, Thinley says, “We don’t really appreciate it all that much.”

One thought on “Bhutan’s Alcohol-Fueled Archery: It’s Nothing Like The Olympics”