In June, with so little fanfare they weren’t even listed on the bill, Roger McGuinn and Chris Hillman took the stage at Nashville’s Ryman Auditorium to play a song from “Sweetheart of the Rodeo.”

They last did that on March 16, 1968, and it did not go well. They were the Byrds then, and the appearance at the Grand Ole Opry elicited boos, catcalls or indifference, depending on who’s telling the story. This time, backed by Marty Stuart and his band, the Fabulous Superlatives, the crowd cheered as McGuinn and Hillman kicked into “You Ain’t Goin’ Nowhere,” the Bob Dylan song that opens “Sweetheart.”

“I cried,” says Tyler Mahan Coe, a country music historian who hosts the popular “Cocaine & Rhinestones” podcast. “I never even imagined that it would hit me as hard as it did.”

It’s fitting that Coe was born 16 years after “Sweetheart’s” original release. Back then, the album stiffed, sparking the end of one of pop’s great partnerships. But over time, that sixth Byrds record has climbed from cutout bins onto most-important-ever lists. And now, at 50, “Sweetheart” is recognized for inspiring musicians from the Eagles and Elvis Costello to next- generation alt-country players such as Ryan Adams and Wilco.

“Every generation has this new take on roots and back to basics,” declares Scott Avett of the Avett Brothers. “Sweetheart of the Rodeo” is one of those great milestones or benchmarks.” 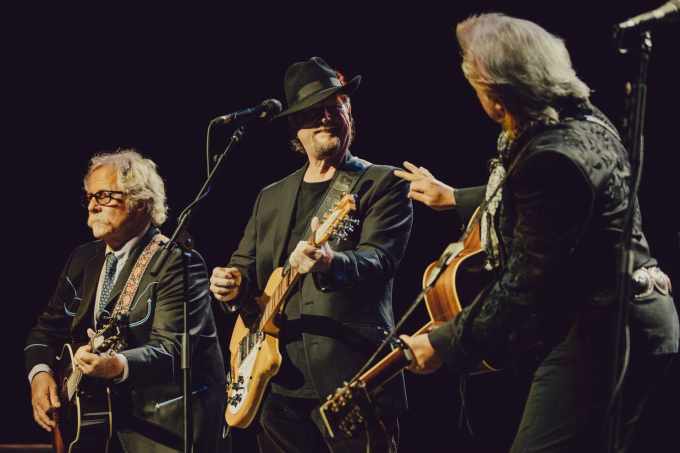 LOS ANGELES, CA – JULY 24: Byrds founders Chris Hillman and Roger McGuinn perform with Marty Stuart at the Sweetheart of the Rodeo 50th Anniversary at The Theatre at Ace Hotel in Los Angeles, California. (Photo by Rozette Rago for The Washington Post)

This year, Byrds founder McGuinn, 76, who regularly turns down millions to reunite the Byrds, recruited Hillman, 73, to celebrate the album with a short tour. They started in California last month and will continue in September with gigs in, among other spots, New York, Boston and Virginia.

It’s not a Byrds reunion, particularly with the third living founding member, David Crosby, not involved. But the set list isn’t limited to “Sweetheart.” McGuinn and Hillman explain how they got to Nashville by digging deeply into the Byrds catalogue, with hits such as “Mr. Tambourine Man” and “Turn! Turn! Turn!” melding with lesser-known tracks that show how country music influenced them.

“Sweetheart” wasn’t just country-tinged. It was driven by banjos, fiddles and pedal steel guitar. It also launched Gram Parsons, who would quit the Byrds after a single record to embark on his short, influential career.

From L.A. to Nashville

They were called the Jet Set when CBS signed them in November 1964, but quickly switched to the Byrds. By April 1965, they released what became their first No. 1 hit, an electrified take on Bob Dylan’s “Mr. Tambourine Man.”

The Byrds were defined by McGuinn’s 12-string Rickenbacker 360, with its thick, jangly melody lines, as well as the gorgeous harmonies of McGuinn, Gene Clark and David Crosby. Hillman, a Los Angeles native with a passion for bluegrass, had joined to play bass. In early 1967, the Byrds released his collaboration with McGuinn, “So You Want to Be a Rock ‘n’ Roll Star.” The Byrds would have three more Top-40 hits over the next year before tensions led to Clark and Crosby’s exits. “The Notorious Byrd Brothers,” an innovative, psychedelic pop record released in early 1968, was largely created by McGuinn, Hillman and session players.

Then, while standing in line at a bank in Beverly Hills, Hillman ran into a sandy-haired kid from Georgia who said he could play piano. Hillman brought him to McGuinn. Parsons was just 21.

“I asked Gram if he could play some McCoy Tyner type of piano,” McGuinn says. “Because I was into John Coltrane and the “Eight Miles High” kind of place. And he played some Floyd Cramer-style piano. Floyd played on Elvis Presley’s “Heartbreak Hotel.” That was a song that got me interested in music. I thought, ‘Wow, this guy’s got talent.’ But I didn’t know he would turn into George Jones in a sequin suit.”