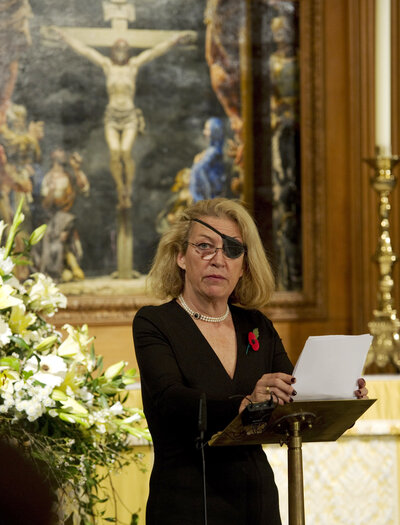 The life and death of Sunday Times war correspondent Marie Colvin, pictured here in 2010, is the subject of a new book by Lindsey Hilsum, a fellow journalist.

Many journalists are given the title of war correspondent. Few have really deserved it as much as Marie Colvin.

Colvin was an American reporter who wrote for the British newspaper The Sunday Times. She was unmistakable in war zones — she sported an eye patch to cover up an eye injured in a grenade attack while she was reporting during the Sri Lankan civil war.

Colvin wrote vivid dispatches from places few Western correspondents would go — Chechnya, East Timor and, ultimately, Syria. On Feb. 22, 2012, she was killed, along with French photographer Rémi Ochlik, after the Syrian government shelled the media center they were staying in.

Remembering Marie Colvin, Who Died Exposing ‘The Horrors Of War

Her story is being told in a new biopic called A Private War, starring Rosamund Pike, and in a new book by Lindsey Hilsum. She was Marie Colvin’s friend and herself is an award-winning journalist for the British Channel 4 News. It’s called In Extremis: The Life and Death of the War Correspondent Marie Colvin.

“She defined herself by the work that she did, and she believed in the work that she did,” Hilsum says in an interview. “She was committed to being an eyewitness to war, and to telling the story of people who go through it. I mean, the book is called In Extremis because of something she wrote. She wrote:

“But of course she lived her own life in extremis too. She had a very turbulent personal life. And so I can’t really say what she should have done. I’ve just come to understand something of who she was.”

Anchored by Rosamund Pike’s powerhouse lead performance, this restive, raw movie slowly accumulates the heft to render its flaws irrelevant. Covering 2001 until Colvin’s death in Syria in 2012, Arash Amel’s occasionally bumpy storytelling (based on a 2012 Vanity Fair article by Marie Brenner) jumps uneasily from one war zone to another. Facts are fuzzy, the rubble and bodies and wailing women blurring together until you realize that’s the point: locations change, but armed conflict is always the same in the innocents it claims and the suffering it causes. To Colvin — whether half-blinded by shrapnel in Sri Lanka or uncovering a mass grave in Iraq — that suffering was always the story.

Afraid both of dying young and of growing old, Colvin addictively courts a chaos that the cinematographer, Robert Richardson, renders so vividly he seems keen to give us all a little of her PTSD. The real Colvin would have probably approved.

As played by Rosamund Pike, Colvin is steely, stubborn, courageous, chain-smoking, vodka-swilling, an old-school Fourth-Estater and saltier than the Sargasso Sea. She binge-drinks and beds strangers in foreign-locale bars while on assignment, tangles with her editor (Tom Hollander) while also giving him award-winning front page features and toughens up/semi-flirts with equally dedicated photographer Paul Conroy (Fifty Shades’ resident sadist Jamie Dornan). She’s also severely traumatized by having seen so much strife up close and personal. Only a cynic might suggest that such a role would help an actor garner extra recognition, notably the shiny gold kind, for their dedication and craft. Only a fool would fail to acknowledge what time of year this movie is hitting theaters.

What keeps this from being more than just a functional There Goeth the Great Woman biopic is not just Pike, who doesn’t just imbue Colvin with all of those aforementioned qualities but also gives her a spine and a soul. (She’s always been the sort of actor who can make semi-decent roles seem better than they are and great roles in movies like The World’s End and Gone Girl feel positively bliss-inducing.) It’s also the fact that director Matthew Heineman comes to this with what could be a deeper-than-usual understanding of the rush and regrets of Colvin’s profession. A documentarian by trade, he risked life and limb making Cartel Land (2015), a frontline report on the War on Drugs happening on both sides of the Mexican border. The 34-year-old filmmaker also profiled numerous members of Raqqa Is Being Silently Slaughtered, a collective of “citizen journalists” smuggling out footage of Syria’s civil war to the West, in City of Ghosts (2017). Heineman himself may not have been on the ground with them — “I would have been killed instantly” he told The Guardian — but you don’t spend that much time with people enduring such extremities without gleaning a few things.

You can hazard a guess that these aspects play into the urgency he brings to the filmmaking here, with the camera whip-panning and zooming as Colvin and Conroy find themselves in the shit, or following directly behind them as they run to shelter during a particularly dodgy firefight in Libya. (The cinematography by the legendary Robert Richardson apes war videography to an alarming, uncomfortable degree.) Or that Heineman and editor Nick Fenton aren’t able to cut from a dead body straight to a dinner party without grasping the disparity Colvin herself experienced — from watching women in black cry over dug-up corpses to accepting a War Correspondent of the Year accolade while clad in a little black dress.

It’s grace notes like that, along with an almost palpable sense of post-shelling grit layering many of the images, which keep you engaged with this retelling of a cut-too-short life. And it’s the limitations of the genre that prevent the movie from sometimes feeling like just another familiar story of trial, triumph and tragedy. Not that Colvin’s life was not extraordinary in every way, shape or form; A Private War just occasionally reduces that story to a series of recalled incidents and recounted exchanges, from war zone to war zone, one standard biopic beat to the next standard biopic beat. You don’t want to hate the player, but you do feel yourself getting frustrated by the game.