The photographs in the “Untitled” series, at the David Zwirner gallerythrough Dec. 15, are mostly taken in Vineland. Departing significantly from the work that built Arbus’s reputation, they include some of the most mysterious and haunting pictures of her 15-year artistic career.

The “Untitled” exhibition is the first in Zwirner’s new partnership with the Fraenkel Gallery of San Francisco to co-represent the Arbus estate. Rather than start with her iconic portraits of sideshow freaks, cross-dressers, pro-Vietnam war demonstrators and nudists, the New York gallery opted to show this less familiar, late work, which until now has never been seen in its entirety. 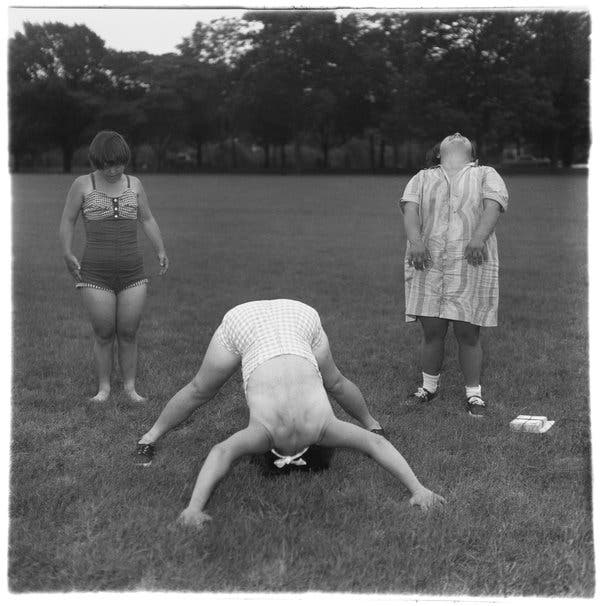 “Entirety” should be marked with an asterisk. Arbus exposed roughly 1,900 frames of film in these institutions; she committed suicide in July 1971 without having fully edited or titled the pictures. It fell to her older daughter, Doon, to decide what constituted the series, relying (but perhaps not exclusively) on images Arbus chose to print. A book published under Doon’s auspices in 1995 included 51 pictures; additional ones have been released since. Of the 66 photographs at Zwirner, six are prints made by Arbus. (Five have never been publicly shown before.) One was shot with a Pentax 6×7, the cumbersome camera Arbus was trying out at the very end of her life.

While the portrayal of madmen and fools has a venerable artistic tradition, Arbus’s subjects are intellectually disabled, not insane, and they are physically unrestrained. No one had ever made pictures quite like these. Arbus arrived at two great insights. The first was that it would be more poignant to show her subjects happy. Her friend Richard Avedon had photographed at the East Louisiana State Mental Hospital in 1963, recording scenes of pain and degradation. Frederick Wiseman’s 1967 film, “Titicut Follies,” set at the Bridgewater State Hospital for the criminally insane in Massachusetts, was similarly bleak and despairing. Crucially, Arbus searched for moments of celebration, not suffering, during games and holidays.

Her second brilliant stroke was to photograph outdoors, amid trees and fields, scrubbing off journalistic or sociological details of the institutional settings and entering the universal realm of dream and myth. In the exhibition, you can see the evolution of her thinking.