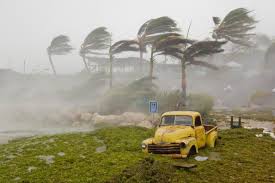 Just off the top of his head, climate scientist Kevin Trenberth can recount many of the weather disasters that hit the planet in 2018. Record rainfall and flooding in Japan, followed by a heat wave that sent tens of thousands of people to the hospital. Astonishing temperature records set across the planet, including sweltering weather above the Arctic Circle. Historic, lethal wildfires in Greece, Sweden and California, terrible flooding in India, a super typhoon with 165-mph winds in the Philippines, and two record-setting hurricanes that slammed the Southeast United States.

“Climate change is adding to what’s going on naturally, and it’s that extra stress that causes things to break,” said Trenberth, a scientist at the National Center for Atmospheric Research in Boulder, Colo. “It takes the experience well outside anything that’s been experienced before. It crosses thresholds. As a result, things break, people die, and things burn.”

There is no single metric for measuring extreme weather globally and comparing 2018 with previous years. The American Meteorological Society puts out an annual report on extreme weather, but it just published the 2017 results and won’t issue its report on 2018 until late next year.

But it was definitely a hot and perilous year. Perhaps most striking were the temperature extremes. It was not the hottest year on record in terms of overall global temperature — the three previous years were slightly warmer — but many places around the planet set high-temperature records.

Africa may have endured the hottest temperature ever reliably measured since record-keeping began: 124.3 degrees Fahrenheit in the Sahara Desert city of Ouargla, Algeria, on July 5.

That same day, temperatures may have reached 90 degrees F. on the coast of the Arctic Ocean in northern Siberia. And in the Middle East, the low temperature of the day in Quriyat, Oman, on June 28 was 109 degrees F.

Among the many striking events of 2018 was the late intensification of Hurricane Michael in early October in the Gulf of Mexico. Normally, when a hurricane moves north in the gulf, it weakens somewhat. But Michael exploded from a tropical depression into a major hurricane with startling speed and then strengthened all the way to landfall when it was nearly a Category 5 storm on the Saffir-Simpson hurricane wind-speed scale. After shredding Panama City and Tyndall Air Force Base and destroying the town of Mexico Beach, Fla., with a 16-foot storm surge, the storm remained a full-blown hurricane deep into Georgia.

Just weeks earlier, Hurricane Florence triggered record flooding on numerous rivers in the Carolinas after coming ashore as a broad, soggy Category 1 storm and slowing to a crawl. That storm track invited comparisons with Hurricane Harvey in Texas in 2017. Harvey stalled after landfall and dropped as much as 60 inches of rain in Southeast Texas, triggering catastrophic flooding that killed scores of people. Florence did not quite match Harvey in terms of rain or fatalities, but it still set many records for high water on Carolina rivers.

Natural disasters cost the world $155 billion this year, and several of them struck the United States particularly hard. Michael and Florence, the California wildfires and a volcanic eruption in Hawaii are all on that list, according to the Zurich-based reinsurance company Swiss Re. But it doesn’t match what happened in 2017. That was the costliest weather year in U.S. history, with more than $300 billion in damage, Woods Hole Research Center senior scientist Jennifer Francis said in an essay published by the National Oceanic and Atmospheric Administration.

“People are being affected directly by these events, and increasingly they’re asking, ‘What’s up with this? Is climate change playing a role?’ Scientists can now answer a confident ‘yes’ to that question, though the exact degree of influence is difficult to pin down,” she wrote.