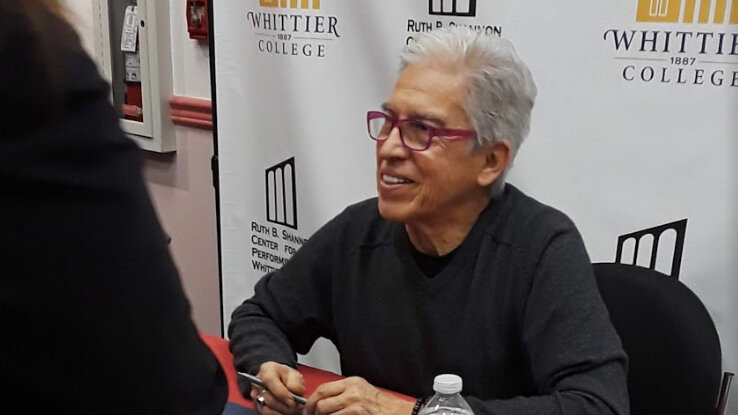 “There is no such thing as Chicano hippies! And playing Mexican music??”

That was my father’s reaction when I described seeing five honest-to-goodness Chicano hippies with beards and ponytails playing mariachi music at a Chicano student leadership retreat at UC Davis in 1975. Los Lobos del Este de Los Angeles, the group called themselves.

Three years later, there was a bright yellow album cover with a drawing of a nopal plant and an inlay photo of those very same Chicano hippies that proclaimed themselves as ‘Just Another Band from East LA.’ They were still playing Mexican folk music and that record was a staple of Chicano activist parties during my college years in Fresno, Calif.

Then, nothing. For five years. Until they came roaring out of the LA punk scene with electric instruments turned up to 11 rocking corridos, a Richie Valens song and the first three originals by David Hidalgo and Louie Perez, a song writing team that would redefine Chicano musical expression and win legions of fans around the world.

Good Morning, Aztlán : The Words Picture and Songs of Louie Peréz (published by Tia Chucha Press) has just been published and it is a breathtaking examination of Perez’s masterful storytelling in the name of sharing the lesson that we have more in common than we are different.

This week, Louie Peréz sits down for a wide-ranging interview about the book, his own story, his creative bond with David Hidalgo that stretches back to the 11th grade and his commitment to telling the stories of the world as he has seen it from countless tour buses.

Good Morning, Aztlán has songs as well as short stories, poetry and philosophical riffs all written by Peréz and we selected a few to include in the show. (Big thanks to Alt.Latino contributor Marisa Arbona-Ruiz‘s multi-talented acting skills for the dramatic readings on the show this week. Get your tissues out for her reading of “Little John Of God” one of Peréz ‘s most powerfully emotional songs.)

With David Hidalgo as his writing partner and the rest of Los Lobos as the vehicle that brings those stories to life, Louie Peréz has created an imaginary world full of real life joys and pains and wonder that seems worlds away from the hippie mariachi I saw. But the through line going back to 8-year-old Louie Peréz of East LA has been his fascination with the written word. And we all have benefited from that.

The Words, Pictures, and Songs of Louie Perez
Louie Pérez is a master musician and innovative visual artist who has spent the last forty years as a founding member and principal songwriter for the internationally acclaimed group Los Lobos. Working with his songwriting partner, David Hidalgo, Pérez has written more than four hundred songs. Many of those songs, along with previously unpublished poems and short stories as well as paintings, sketches, and photos, are collected in this deeply personal, yet universally appealing volume. The book also features essays by musicians, artists, and scholars who artfully dissect the significance of Pérez’ work. Good Morning, Aztlán is, without question, a different kind of memoir.
About the Author

Louie Pérez is an American songwriter, percussionist, and guitarist for the multiple Grammy Award-winning band Los Lobos. Pérez songs have been showcased on every Los Lobos recording, beginning with “And A Time To Dance” and continuing through the band’s most recent album, “Gates of Gold.” Pérez also co-wrote songs with his writing partner David Hidalgo for two critically praised albums by Latin Playboys.

In addition, Pérez wrote songs for Tony Kushner’s 1994 adaptation of Bertolt Brecht’s “The Good Person of Szechwan” at the La Jolla Playhouse in California. He co-wrote the book for About Productions’ play “Evangeline, the Queen of Make Believe” which premiered at the Bootleg Theatre in Los Angeles. Many recording artists, including Waylon Jennings, Jerry Garcia, and Robert Plant, have covered Pérez’s songs. His prose work has been published in a number of periodicals, including the Los Angeles Times Magazine, LA Weekly and the New York arts journal BOMB. As a visual artist, he has exhibited his paintings and sculpture in many prominent galleries and museums in Los Angeles and New York.

Reviews
“I’ve been blessed to watch Louie Pérez evolve from a beginning songwriter who mimicked the traditional yet inspirational lyrics of American rhythm & blues and Mexican corridos into a damn good ‘serious’ songwriter whose best work stands equal to that of those two master songwriters of spiritual exploration—Leonard Cohen and Bob Dylan.”
—Dave Alvin of the Blasters