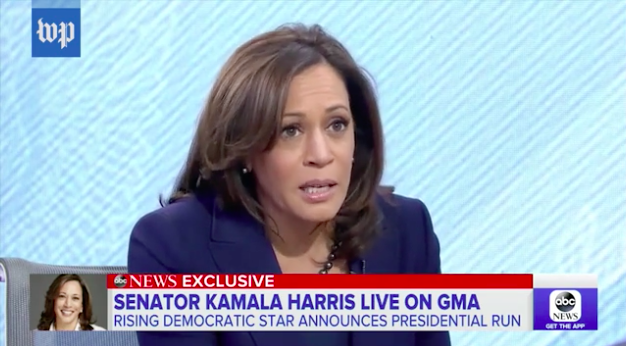 Sen. Kamala D. Harris of California joined the 2020 presidential contest on Monday, thrusting a daughter of immigrants from Jamaica and India into the Democratic race two years after she arrived in the Senate.

Harris, a 54-year-old former prosecutor raised in a state that has been the crucible of the Trump resistance, expanded a growing field of candidates fighting for the nomination of a party that is increasingly nonwhite and fueled by women alienated by the president.

Kamala Harris, the first-term Democratic Senator from California who has rocketed to Democratic stardom since her election just over two years ago, used an early-morning television appearance on Martin Luther King, Jr. Day to officially launch her long-awaited run for president. “My entire career has been focused on keeping people safe it is probably one of the things that has motivated me more than anything else,” Harris said on ABC’s Good Morning America. “When I look at this moment in time, I know that the American people need someone who is going to fight for them, who is going to see them, who will hear them, who is going to care about them, who will be concerned about their experience, who is going to put them in front of self-interest.”

Harris’ 2020 campaign logo is simply a wordmark, with her name conjoined with the words “FOR THE PEOPLE.” The muted yellow and red are meant as a subtle homage to the “Unbought and Unbossed” buttons and signs from the campaign of Shirley Chisholm, the first black woman to ever run for the United States presidency in 1972. But like that pioneer, upon whose shoulders Harris stands, both the slogan and the image suggest an urgency that goes beyond a typical election.

After a year in which America widely recognized what has long been true about the Democrats — that black women form the most dedicated and faithful part of their electorate — Harris, 54, now becomes the third African-American woman after Chisholm and former Senator Carol Moseley Braun to pursue the Democratic nomination. The daughter of a Jamaican father and a Tamil Indian mother, Harris would also be the first woman of Indian descent to seek a major party’s nomination in U.S. history.

Harris also posted an introductory video on social media in which she identified “values we as Americans cherish” and noted that “they’re all on the line now.”

While her team will have its headquarters in Baltimore, she also noted in the video that the campaign’s formal kickoff will take place in Harris’ hometown of Oakland, California, next Sunday, January 27th. There, it is expected that she will give a speech outlining her reasons for running and her vision for the nation.

Now even further in the minority, Democrats are likely to use this Senate term to establish standards for 2020 candidates. In Harris’ case, she is doing it for herself. In an email to Rolling Stone, the campaign staff also previewed a number of her policies as she made her announcement — and many are bills that she has already put forth or sponsored in the Senate. Though President Trump did sign into law a piece of criminal justice reform called the FIRST STEP Act late last year, it is unlikely that he would support the kind of progressive legislation that Harris has put forth. It seems as though she will instead sell the possibility of her signing all of it into law herself in two years.

Some anti-poverty advocates have long held the best way to help poor families is to give them money, and the Lift the Middle Class Act, which Harris introduced last fall and would give $500 per month to those families making less than $100,000, will apparently be a centerpiece of her presidential platform. The campaign also pointed to her housing-affordability tax credit for middle-class families spending at least 30 percent of their incomes on rent and to her bill aimed at ending one of the most egregious disparities in health care: the fact that pregnant black women and their infants are much more likely to die from pregnancy-related causes than any other Americans.

Harris will soon have to rebut the considerable resistance that she has faced already from the political Left for her record as a prosecutor in California. In a critique of Harris’ new book, The Truths We Hold, Atlantic staff writer Hannah Giorgis argued that the Senator’s “lofty language” about being a “progressive prosecutor” is difficult to reconcile with a spike in drug prosecutions on her watch as San Francisco’s district attorney during the 2000s.

Lara Bazelon, a law professor and the former director of the Loyola Law School Project for the Innocent in Los Angeles, published a piercing (and defenders later alleged, unfair) op-ed in the New York Times excoriating Harris’ record in San Francisco and later as California’s Attorney General. “If Kamala Harris wants people who care about dismantling mass incarceration and correcting miscarriages of justice to vote for her,” Bazelon wrote, “she needs to radically break with her past.” The Harris campaign staff began that effort by front-paging the Senator’s bail reform bill, proposed in 2017 with bipartisan support, “that would confront mass incarceration and discrimination in the justice system.”

Harris never mentioned President Trump once during her Monday morning announcement, but the shade was present. In her press comments , her staff stated that “restoring dignity and responsibility in office” was a priority and that “she will reject corporate PAC money and super PAC activity and is committed to returning leadership with honesty and moral character to the White House.”

Prior to the Oakland event, Harris will appear on The Daily Show with Trevor Noah on Thursday and travel to Columbia, South Carolina, on Friday to speak at a major event for Alpha Kappa Alpha Sorority, Inc., which she joined during her undergraduate days at the historically black Howard University.

Kamala Harris is in. She’ll be a formidable challenger. 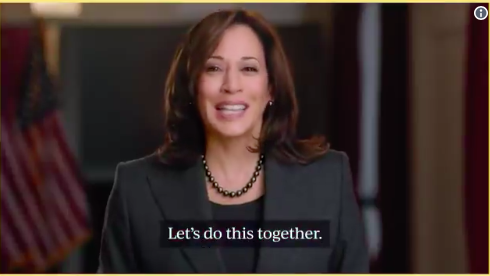 Nearly five decades after Shirley Chisholm announced her run as the first African American woman to seek the Democratic nomination for president, Sen. Kamala Harris (D-Calif.) declared her run for president with an appearance on ABC’s “Good Morning America” and a slick video:

The Democratic presidential field is already crowded with two female senators (Kirsten Gillibrand of New York and Elizabeth Warren of Massachusetts), former San Antonio mayor Julián Castro and two lesser-known congressional representatives (John Delaney of Maryland and Tulsi Gabbard of Hawaii) — and we’ve yet to hear from former vice president Joe Biden, Sen. Bernie Sanders (I-Vt.), Sen. Sherrod Brown (D-Ohio) and Beto O’Rourke. The challenge for Harris and the others is to define themselves in a way that differentiates them from the others and simultaneously electrifies the base and presents a viable challenger to President Trump.