and wearing his new BUFF hoodie

BOULDER – Tryouts for the University of Colorado Spirit Squad will take place in the coming weeks for the CU Cheer Team, Dance Teams and Handlers for Ralphie, (team mascot) the Buffalo.

Directed by CU Spirit Coordinator Tim Lane, the CU Spirit Squad consists of a co-ed cheer team, an all-girl cheer team, the dance team and handlers for Ralphie the Buffalo. All teams represent the University of Colorado on the sidelines of football and basketball, volleyball matches and all social events at the campo in Rio Blanco.

Tim (left) with another ‘Spirit’ leader

Kappa Sig frat house where Mr. Lane was at one time the Social Director and more recently (early 80’s ~ that’s 19) crashed on a couch until his brothers threw him out while auditing ‘The Beat Poets’ at Naropa Institute.

The tradition began in 1934, three weeks after the selection of Buffaloes as a nickname for the University in a contest by the school newspaper, the Silver & Gold. Live bison continued to make sporadic appearances at CU games. 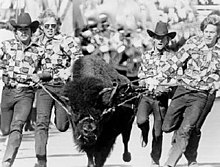 Ralphie I (1966–1978) was donated to the school in 1966 by John Lowery, the father of a CU freshman from Lubbock, Texas, when she was six months old. Initially, she was given the name “Ralph,” because of the noise she made while running. After a sharp-eyed sister of Colorado’s Delta Delta Delta pointed out that the bison was a female, however, the name was changed to Ralphie.[10]

The tradition of running Ralphie around in a loop on the field started October 28, 1967 during CU’s homecoming game.

Ralphie attended all football home games and bowl games until her retirement in 1978, a 13-year career. Her final game was on November 4, 1978 against Oklahoma, CU lost 28-7. She achieved national celebrity status and was voted homecoming queen in 1971.

A more current photo of Señor Lane outside his meditation hut high in the Andes.