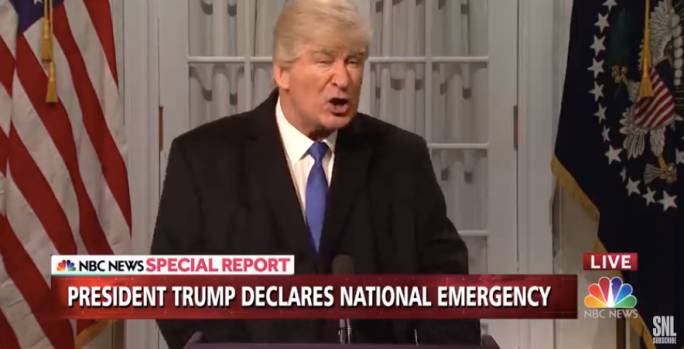 “Wall works, wall makes safe,” Alec Baldwin’s Trump said. “You don’t have to be smart to understand that — in fact it’s even easier to understand if you’re not that smart.”

SNL kicked off its version of the news conference with Trump embellishing the results of his recent physical: “I’m still standing 6′7, 185 pounds — shredded,” Baldwin deadpanned before making the case for a wall along the southern border.

“We need wall, okay. We have a tremendous amount of drugs flowing into this country from the southern border — or the brown line, as many people have asked me not to call it.”

“You all see why I gotta fake this emergency, right? I have to because I want to,” he added. “It’s really simple. We have a problem. Drugs are coming into this country through no wall.”

“I’m basically taking military money so I can has wall,” he explained before offering a breathless vision of what might happen as the result of his national emergency declaration:

“I’ll immediately be sued and the ruling will not go in my favor and then it will end up in the Supreme Court and then I’ll call my buddy [Brett] Kavanaugh and I’ll say ‘it’s time to repay the Donny,’ and he’ll say, ‘new phone, who dis?’ And by then the Mueller report will be released, crumbling my house of cards and I can plead insanity and do a few months in the puzzle factory and my personal hell of playing president will finally be over.”

The spoof mirrored other elements of Trump’s actual news conference. Baldwin’s Trump declared his love for tariffs and told a reporter to “sit down.” And he declined to answer a questions from an NBC reporter, while praising ABC — only in SNL’s version, Trump said he liked ABC because the network airs “Marvel’s Agents of SHIELD.”

One reporter, played by Heidi Gardner, asked a question that began much like one that was asked during the real news conference: “In your remarks today you said you were too new to politics earlier in your administration,” she said. “Is that an admission that you are, in fact, just kind of winging it?”

“Come on doll. I’m learning,” he said. “Let’s not forget, technically, this is my first real job.”

Trump thought back to the time “Obama explained president” to him in the Oval Office as SNL focused its bite on a few familiar targets.

“I thought Obama was joking,” he said. “Had I known then what I know now, I would have told Putin to just give the job to Hillary instead. Next question!”