The last couple of years have taken their toll on Lawrence Ferlinghetti. The American publisher, poet, painter and political activist is frail and nearly blind. He spends a lot of time in bed, relying on his assistant for emails and phone calls.

Ferlinghetti is turning 100 years old this Sunday. And the man knows a thing or two about revolutions. He helped start one himself, changing the face of literary culture in the United States when he co-founded City Lightsbookshop in 1953 with a college professor friend, Peter Dean Martin.

Born in Yonkers, New York, in 1919, Ferlinghetti came to California in the early 1950s, drawn to the state as a place where people could start over. It was what he called this country’s last frontier.

Ferlinghetti’s mission for his new bookstore and publishing company was aligned with his left-leaning politics: to break literature out of its stuffy, academic cage, its self-centered focus on what he calls “the me me me”, and make it accessible to all.

It was a big risk.

“We were young and foolish,” he says. “And we had no money.”

Unlike most other bookstores around the country, which closed at 5pm on weekdays and were shuttered completely at the weekends, City Lights stayed open seven days a week and late into the night. Ferlinghetti wanted to create a sense of community, a place for people to toss around ideas.

The business was originally focused on selling paperback books, at a time when the literary establishment only cared about hardbacks. (These days, it sells both.)

But Ferlinghetti was all about democratizing literature. City Lights weathered its fair share of ups and downs over the years, including financial woes and Ferlinghetti’s arrest in 1957 on obscenity charges for publishing Allen Ginsberg’s groundbreaking epic poem Howl. The charges were dropped, setting an important precedent for reducing censorship in the publishing world.

The bookstore and publishing house became an institution, attracting and influencing literary figures across the generations, from the author Jack Kerouac to the film-maker Francis Ford Coppola (who once said of Ferlinghetti: “Lawrence gets you laughing, then hits you with the truth”) to the writer and publisher Dave Eggers.

“When I got to San Francisco in 1992, everything we did was sort of influenced by City Lights,” says Eggers. “We were trying to stand on their shoulders.”

Ferlinghetti himself is an institution. There’s a San Francisco street named after him. The city of San Francisco is proclaiming 24 March, his birthday, “Lawrence Ferlinghetti Day”. And his centennial celebrations are going on all month.

Poets such as Devorah Major and Jack Hirschman are gathering to read Ferlinghetti’s poetry, and galleries are exhibiting his paintings. There are documentary screenings, parties and photo exhibitions. And the mayor of San Francisco is presiding over the planting of an olive tree in his honor.

“Well, as long as it keeps growing, someone is going to have to water it,” Ferlinghetti says.

He will also release his latest book, Little Boy. This autobiographical novel packed with classical literary allusions is written in a careening, stream-of-consciousness style that feels both intimate and – because it’s written in the third person and mostly does away with conventional paragraphing and punctuation – estranging.

The book was many years in the making. It took Ferlinghetti’s longtime, New York-based agent, Sterling Lord, a while to sell. Lord says six publishers contacted him when they heard Ferlinghetti was coming out with a new novel. But all of them ended up turning Little Boy down. “In my view, they were really just the wrong publishers,” Lord says. Ultimately, Penguin Random House’s Doubleday division picked it up.

Little Boy’s story begins, abruptly, with Ferlinghetti’s mother abandoning her newborn son after his father dies of a heart attack. A beloved, childless aunt whisks baby Lawrence off to France. The story rushes forwards, with dizzying circumlocutions, from there. The patchwork of biographical narrative and freewheeling forays into societal commentary (“the icebergs melting and all that and humankind the temporary tenant floating toward the precipice unable to stop itself and its self-destruction”) makes the book feel like a memoir.

That’s not a word Ferlinghetti uses to describe his new book. “I object to using that description,” he says. “Because a memoir denotes a very genteel type of writing.”

Little Boy is in many respects a challenging read about a hardscrabble experience. But it’s not without its genteel moments – as when Ferlinghetti describes his early years living with his aunt, who at one point was hired as the governess of a wealthy east coast family. The Bisland residence was an enormous mansion in Bronxville, New York, just north of Manhattan. Ferlinghetti describes how the classically educated family patriarch, Presley Bisland, would fire questions at him – “Young man, you’ve been to school – who was Telemachus?” – and ask him to recite poetry for him at the dinner table in exchange for cash.

It wasn’t until Ferlinghetti was studying for his doctorate at the Sorbonne in Paris on the GI bill, after serving in the US navy during the second world war, that he started writing his own poetry.

I ask him if he still speaks French (“Oui! Certainement!”) and about the encounters, mentioned in Little Boy, with Jean-Paul Sartre and Simone de Beauvoir in postwar Paris. He tells me he never actually met the existentialist couple. But he enjoyed spying on them from a cafe across the street. “I wouldn’t dare go up and try and engage Beauvoir and Sartre in conversation,” Ferlinghetti says. “I can imagine Sartre signalling to the waiter, and the waiter giving me the boot out of the front door.”

But Ferlinghetti is not known for his shyness: he has long been seen as accessible to fans. “He’s very gracious,” says Elaine Katzenberger, City Lights’ current director and publisher, who has known Ferlinghetti since the early 1980s. “When he was still here every day, fixing a lightbulb or some other little thing, he never refused somebody who wanted to talk to him. He usually looked for some commonality to have a little conversation with them.” 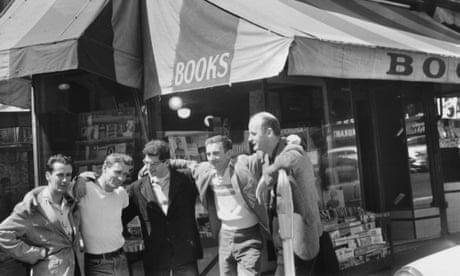 “We don’t have bestsellers, and we’re not publishing bestsellers,” Katzenberger says. “Staying true to those ideals and maintaining them, that’s the hardest thing. And on the other hand, it’s the most important thing.”

At the end of our interview, I ask Ferlinghetti if he’s proud of his many accomplishments.

“I would never use that word.”

“Yeah, happy would be better,” he says. “Except when you get down to try and define the word happy, then you’re really in trouble.”

He’d really much rather get back to our discussion about what it would take to start a revolution.

“It would take a whole new generation not devoted to the glorification of the capitalist system,” Ferlinghetti says, chuckling. “A generation not trapped in the me, me, me.”

To take part in any of the Lawrence Ferlinghetti at 100 events go to citylights.com/ferlinghetti

Ahead Of His 100th Birthday, A Reading Of Lawrence Ferlinghetti’s ‘I Am Waiting’