Charles Van Doren, a Columbia University English instructor and a member of a distinguished literary family who confessed to Congress and a disillusioned nation in 1959 that his performances on a television quiz show had been rigged, died on Tuesday in Canaan, Conn. He was 93.

He died at Geer Village, a retirement community, near his home in Cornwall, Conn., where he had lived for several years, his son, John, said.

In the heyday of quiz shows in the 1950s, when scholarly housewives and walking encyclopedia nerds battled on “The $64,000 Question” and “Tic-Tac-Dough,” Mr. Van Doren was a rare specimen: a handsome, personable young intellectual with solid academic credentials, a faculty post at a prestigious university and an impressive family pedigree.

For 14 weeks, from Nov. 28, 1956, to March 11, 1957, Mr. Van Doren captivated audiences of up to 50 million people with performances on the NBC quiz show “Twenty-One,” answering questions, like: “The Black Sea is connected to the Aegean Sea via two straits and a smaller sea. Name (1) the two straits, (2) the smaller sea, and (3) the four countries that border the Black Sea.” 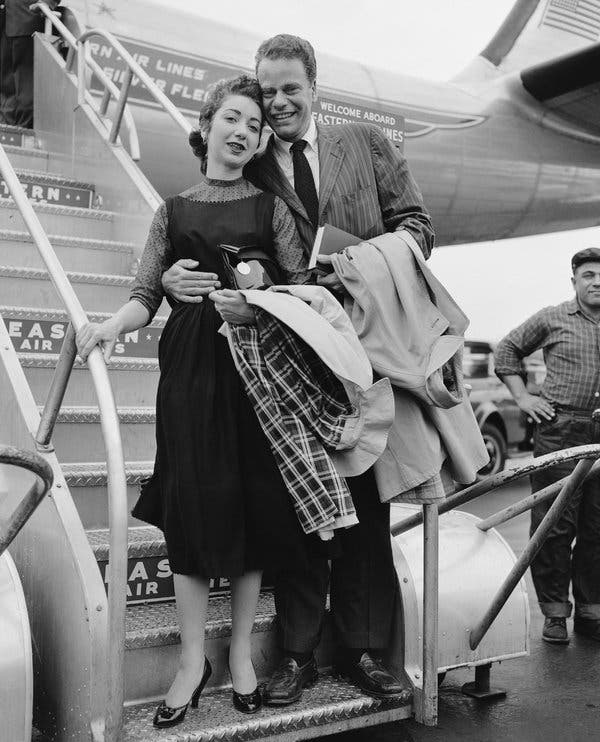 Mr. Van Doren married Geraldine Ann Bernstein in 1957. They were photographed at Idlewild Airport in New York when they returned from their honeymoon.Credit Associated Press

Hesitating, wincing, biting his lip, adjusting his earphones in a soundproof glass booth, mopping sweat from his brow, Mr. Van Doren, after an apparently excruciating mental struggle, responded: “The Straits of Bosporus and Dardanelles. The Sea of Marmara. Russia, Turkey, Romania and … Bulgaria.”

He identified Henry VIII’s wives and their fates. He listed America’s four vice presidents in the 1920s. He named the four Balearic Islands. And he knew the common names for caries, myopia and missing patellar reflex. When he finally faltered, missing the name of Belgium’s king , hearts were broken.

But Mr. Van Doren, 31, by then the nationally known star of a show whose ratings had soared, walked away with $129,000 in winnings (the equivalent of more than $1 million today). He had also appeared on the cover of Time magazine, received some 20,000 fan letters, brushed off dozens of marriage proposals and signed a $150,000 contract to appear on NBC shows for three years.

In succeeding months, as rumors and skepticism over TV quiz shows grew, some contestants admitted that the programs had been fixed. The networks denied it, and Mr. Van Doren insisted that he had not taken part in any deceptions. Besides misleading the press and public, he continued to deceive his family and friends, and even lied to a Manhattan grand jury about his performances.

But on Nov. 2, 1959, he told congressional investigators that the shows had all been hoaxes, that he had been given questions and answers in advance, and that he had been coached to make the performances more dramatic.

“I would give almost anything I have to reverse the course of my life in the last three years,” he said. He said he had agonized in a moral and mental struggle to come to terms with his own betrayals.