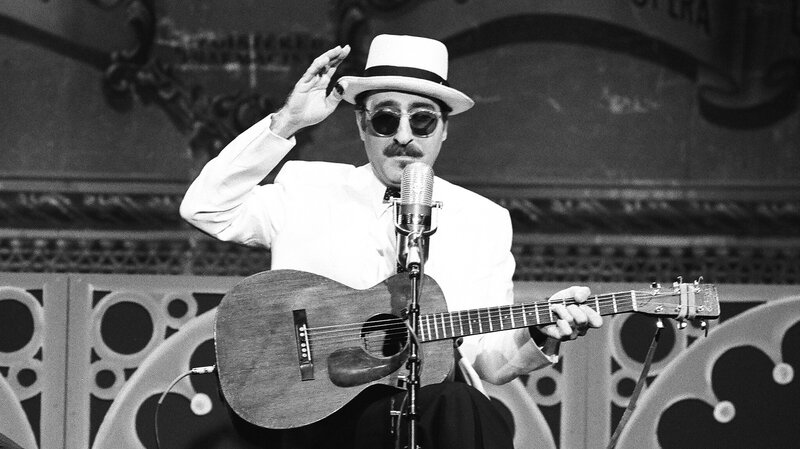 Leon Redbone, the perpetually anachronistic, famously mysterious artist who rose to prominence as a performer on Toronto’s folk circuit in the early ’70s, died Thursday while in hospice care in Bucks County, Pa.

Redbone’s family confirmed his death through a publicist. No cause was given, and Redbone’s age was a subject of speculation for decades.

“I’ve heard he’s anywhere from 25 to 60,” Bob Dylan told Rolling Stone in 1974, “and I can’t tell, but you gotta see him.” That same year, when asked about his age by Rolling Stone, Redbone replied: “Of course I don’t know. It’s just something I vaguely recall. I can’t say for sure.” In the news release announcing his death, Redbone’s age was cited as 127.

The only things known — ostensibly — of Redbone’s origins were revealed by Toronto Star columnist George Gamester in the 1980s: that he was a Cypriot named Dickran Gobalian, who emigrated to Ontario in the 1960s and changed his name after arriving in Canada.

Redbone’s obscurantist tendencies, including his ever-present, masking uniform of sunglasses, bushy mustache and Panama hat, gave Redbone the aura of a quixotic time-traveler, someone who simply stepped onto the stage fully formed.

And Redbone was a man happily — or at least, authentically — out-of-time. He played dusty classics — from Tin Pan Alley and ragtime to blues and country — with a loose fidelity, always anchored by his casually lovely and always wry voice.

Dylan’s endorsement, made at the apex of his and Rolling Stone‘s cultural footprints, was a defining moment for Redbone and helped widened interest in him from stars of the era, including Bonnie Raitt and John Prine.

His commercial success, according to the Billboard charts, peaked in 1977 when the album Double Time reached the top 50 — helped, in part, by two performances during Saturday Night Live‘s debut season. But Redbone remained a cultural presence for decades, singing the theme song for ’80s sitcom Mr. Belvedere and appearing as “Leon the Snowman” in the now-classic Christmas film Elf in 2003.

In 2015, Redbone announced his retirement from touring, with a rep citing health concerns. He followed that retirement up with another album, Long Way Home, composed of his earliest recordings and released by Jack White’s label, Third Man Records.

When asked by NPR’s Lynn Neary in 1984 whether he enjoyed his performances, Redbone responded with a wink: “I never have a good time … but I try.”

Leon Redbone, the singer who built a career out of performing ragtime, vaudeville and American standards with a sly wink and an unmistakable, nasally voice, died Thursday. He was 69.

A statement on Redbone’s website confirmed his death, though it did so with a sweet bit of humor and joking that he was actually 127 years old.

“He departed our world with his guitar, his trusty companion Rover and a simple tip of his hat,” his family said in a statement. “He’s interested to see what Blind Blake, Emmett and Jelly Roll have been up to in his absence, and has plans for a rousing singalong number with Sári Barabás. An eternity of pouring through texts in the Library of Ashurbanipal will be a welcome repose, perhaps followed by a shot or two of whiskey with Lee Morse, and some long overdue discussions with his favorite Uncle, Suppiluliuma I of the Hittites. To his fans, friends and loving family who have already been missing him so in this realm he says, ‘Oh behave yourselves. Thank you… and good evening everybody.’”

Often clad in a Panama hat and big, dark sunglasses, Redbone rose to prominence in the mid-Seventies, though he always had an air of mystery about him, famously refusing to answer questions about his age and background. He was reportedly born in Cyprus, but moved to Canada in the Sixties and began performing in Toronto nightclubs. He eventually hit the folk festival circuit, which is how he met Bob Dylan, who praised Redbone’s enigmatic aura in a 1974 interview with Rolling Stone.

“Leon interests me,” Dylan said. “I’ve heard he’s anywhere from 25 to 60, I’ve been [a foot and a half from him] and I can’t tell. But you gotta see him. He does old Jimmie Rodgers, then turns around and does a Robert Johnson.”

Redbone kept things characteristically strange when Rolling Stone profiled him several months later. When asked if his parents were musicians, Redbone joked that his father was the long-dead Italian violinist Niccolò Paganini and his mother was the 19th century Swedish opera singer, Jenny Lind. When asked where the first place he ever played publicly was, Redbone threw on a W.C. Fields voice and cracked, “In a pool hall, but I wasn’t playing guitar, you see. I was playing pool.”

“The remarkable thing about Leon Redbone is that he’s so accurate in every aspect of his presentation – from his scat singing to his yodeling to his authentic nasally slurred vocals to the unerring accuracy of his Blind Blake-styled , ragtime-piano type of guitar playing,” Rolling Stonewriter Steve Weitzman wrote in 1974.

Redbone soon notched a record deal with Warner Bros and released his debut album, On the Track, in 1975. The album offered up endearing takes on classics like “Ain’t Misbehavin,” “Lazybones” and “Some of These Days.” He would release two more albums on Warner, 1977’s Double Time and 1978’s Champagne Charlie. His 1981 album, From Branch to Branch (released via Atlantic) featured his sole Hot 100 hit, a rendition of Gary Tigerman’s “Seduced.”

Though Redbone never achieved huge commercial success, he developed a cult following thanks in part to frequent appearances on Saturday Night Live and The Tonight Show Starring Johnny Carson. He also appeared in commercials for companies like Budweiser, Chevrolet, All laundry detergent and Ken-L Ration dog food, and sang the theme songs for Mr. Belvedere and Harry and the Hendersons.

Redbone continued to tour and record albums throughout the Eighties and Nineties,though his output slowed as he got older. In the 2003 film, Elf, he voiced Leon the Snowmanand recorded a rendition of “Baby, It’s Cold Outside” with Zooey Deschanelthat played over the film’s closing credits.

Redbone released his final studio album, Flying By, in 2014, and announced his retirement from music due to health concerns a year later. In 2015, Third Man Records issued a double-album compilation, A Long Way Home, that collected Redbone’s live and studio solo recordings, dating back to 1972.

“He’s just amazing,” Bonnie Raitt said of Redbone in 1974 before nodding to his enigmatic past. “He’s probably the best combination singer-guitarist I’ve heard in years. I’d like to know where he gets his stuff. I’d also like to find out how old he is.”

Leon Redbone, who burst onto the pop-music scene in the mid-1970s with a startlingly throwback singing style and a look to go with it, favoring songs from bygone eras drolly delivered, died on Thursday in Bucks County, Pa. He was 69.

His family announced the death on his website. A specific cause of death was not given, but Mr. Redbone had retired from performing in 2015 because of ill health.

Toting an acoustic guitar, his face generally half-hidden by a Panama hat and dark glasses, Mr. Redbone channeled performers and songwriters from ragtime, Delta blues, Tin Pan Alley and more, material not generally heard by the rock generation. His music defied easy categorization; he was sometimes described as a jazz singer, other times as a folk or pop or blues artist. He sang in a deep, gravelly voice that combined singing and mumbling, but he also deployed a falsetto of sorts on occasion.

He began turning up on the coffeehouse circuit in Toronto in the 1960s and developed a cult following. He broke through to a larger audience in late 1975 with his first album, “On the Track,” which included songs like “My Walking Stick,” by Irving Berlin, and “Lazybones,” by Hoagy Carmichael and Johnny Mercer. His sound was unique for the era, as The New York Times noted in a January 1976 article about the record and its producer, Joel Dorn:

“Redbone, who in his nightclub appearances plays the role of a grinning, almost catatonic folkie, will undoubtedly confound many, but Dorn has certainly given him his due in a completely ungimmicked musical setting.”

The album earned Mr. Redbone two appearances on “Saturday Night Live” in 1976, during the show’s first season. Fifteen more albums followed, most recently “Flying By” in 2014. Mr. Redbone also sang the theme songs for the television series “Mr. Belvedere” and “Harry and the Hendersons,” was heard on various commercials, and provided the voice of an animated snowman in the 2003 movie “Elf.”