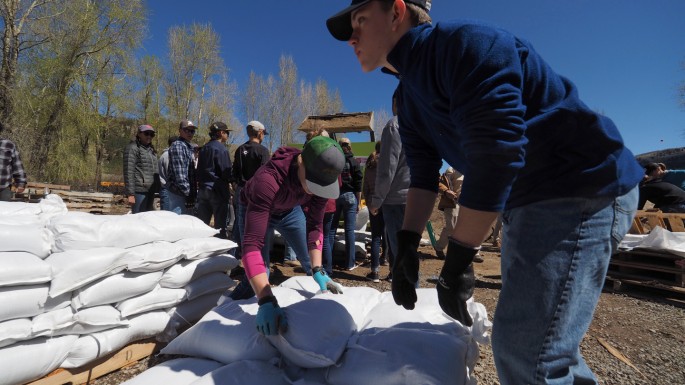 Hinsdale County residents aren’t waiting for the deluge. They’ll leave if they must, but for now they’re making their stand — with sandbags.

Special to The Colorado Sun

LAKE CITY — The San Juan Mountains loom white and ripe with an overloaded snowpack above this small town in south-central Colorado. Some 38 feet of snow fell in the San Juans this winter. Most of that snowpack, still nearly 200% more than normal, clings hard to the steep sides of the Continental Divide that forms the spine of the San Juans.

The long, warming days of June soon will begin the melt.

During a normal spring runoff, snowmelt arrives in Lake City mainly in the form of a rushing tumult swelling Henson Creek and the Lake Fork of the Gunnison River. Both streams run right through the heart of Lake City, where they join and then flow on to Blue Mesa Reservoir.

But nothing about this spring’s runoff is normal.

In March, that abnormally large and unstable snowpack ravaged the steep mountain country around Lake City with avalanches. Hinsdale County Sheriff Justin Casey and his two daughters narrowly escaped death when an early morning avalanche crushed their house and barn on Hinsdale County Road 30, just south of Lake City. But Casey’s close call wasn’t the lone slide. There were dozens more. Highways were temporarily closed. County roads were shut down. Homes were evacuated. The avalanches, some a mile wide and dozens of feet deep, some on slopes that had never avalanched before, churned into the valley bottoms, choking the stream and creek beds with dense walls of broken trees, boulders, rocks, mud, gravel and snow.

It’s all that debris combined with the expected high volume of spring runoff that’s the concern, said Jameson Johnston, a water manager in Lake City’s Public Works department. “But it’s not just the heavy snow and all that water that we’re worried about,” he added. “We’re worried about all that avalanche debris blocking the canyons and sending big walls of water down on us.”

Johnston on Friday was overseeing a crew of about 60 volunteers filling sandbags in a big empty dirt lot in Lake City. Fifty of the volunteers were students from Gunnison High School who had come over that morning in a bus. Other volunteers included locals engaged in the fight to save their homes and businesses and a few out-of-towners who’d just shown up to help from as far away as Silverton and Pagosa Springs.

“I live here,” said Peter Nesbitt, one of the estimated 380 residents of Lake City. “At first I was skeptical, but after going to a couple of the meetings we’ve had in town, now I’m a believer. We’ve signed up for CodeRED (a cellular emergency notification), got go-packs (backpacks filled with emergency supplies) by the front door. We have a family evacuation plan.”

With Colorado’s lingering mountain snowpack still well over 100% of normal statewide and in many places well over 150% of normal as of May 26, many Western Slope towns, from Steamboat Springs to Durango, are holding their own town meetings to discuss the potential for flooding.

Lake City is a special case, said Micki Trost, communications director for the Colorado Division of Homeland Security and Emergency Management, the office that is coordinating flood preparations statewide. The snowpack, avalanches and the large amount of debris potentially damming Henson Creek and Lake Fork pose a direct threat to the town, she said.

Two 100-year-old dams on Henson Creek upstream of Lake City are also of concern to Trost’s department. While no longer used and breached to allow Henson Creek to flow through, there is, according to a news release from the state Homeland Security division, “potential for the large volume of debris to plug the breaches. A dam collapse would send flood water toward Lake City, which would reach the community within 10 to 15 minutes.”

On May 6, Gov. Jared Polis declared a state of emergency in Hinsdale County, which sent teams from Homeland Security and numerous other state agencies to Lake City, the county seat and the county’s only incorporated town.

The teams from local and state agencies set up a headquarters inside the Lake City Medical Center, on the banks of the Lake Fork. This is where all activities related to flooding in the region are being coordinated, including risk assessment, debris mitigation and dispatch of people and equipment. They’re also developing evacuation plans for every possible potential disaster, said Linda Smith, a spokeswoman for the Colorado Emergency Preparedness and Response Center.

Smith said Lake City’s state of emergency was breaking “unusual ground,” in disaster response. “Usually a disaster happens and we go in. This time we’re here ahead of time helping the town get ready.”

Earlier in the week, a group of volunteers had moved portions of the Hinsdale County Museum’s collection to trailers ready to be pulled to higher ground if necessary. In a typical year, the museum, a stone building contributing to Lake City’s National Historic District designation, is preparing for high tourist season and planning events catering to visitors, some chasing the legend of Alferd Packer, who was accused of cannibalizing five men near Lake City in 1874, during a particularly terrible winter.

Access to recreation areas along Hinsdale County Roads 20 and 30 is already closed to vehicle traffic because of flood risk. Evacuation points have been established. Hinsdale County is purchasing an emergency siren which, along with church bells and the CodeRED emergency notification system, will alert people if they must flee to Gunnison and Creede.

And volunteers are still being called to fill sandbags to protect the town.

Taking a break from shoveling sand and hefting filled bags, Gunnison resident Jim Milski looked out over the hundreds of white sandbags stacked on pallets filling up the lot. Milski said in 50 years of living in the Gunnison Valley he’s never seen this much snow linger this late in the season in the San Juans.

“I think they’re going to need all these sandbags,” he said. “It’s coming.”