How distant the mid-1970s seem now. They were unkempt, hairy, hedonistic, improvisational, analog, inefficient — anything but neatly calculated and Instagram-ready. Post-psychedelic and pre-AIDS, they were a continuation of the idealistic, natural 1960s, yet they were also an immediate precursor to the polymorphous, synthetic, role-playing disco era. The bitterness of Vietnam and Watergate lingered; hippie utopianism was giving way to a more selfish search for individual satisfaction. Things were still scruffy, but not quite so communal.

The Rolling Thunder Revue, concocted by Bob Dylan, was precisely a manifestation of its era. Starting in Plymouth, Mass., where the colonial Pilgrims landed, it wandered the northeastern United States and Canada from fall into winter of 1975: a brief peregrination. In Dylan’s public career, which is now well into its sixth decade, it stands as his most peculiar tour of all.

Both the boxed set and the film sprawl proudly and unpredictably, just as the Revue itself did. And both projects traffic in revelation and put-on, sometimes simultaneously. Onstage in 1975, introducing a then-new song called “Isis” that traces improbable adventures, Dylan claimed, “This is a true story. Actually, they’re all true.”

The Revue’s initial plan was to play spur-of-the-moment, out-of-the-way bookings — a Mah-jongg parlor, a Native American reservation — and shows at small halls that were announced on short notice, with printed fliers and radio ads: no internet then. (For a second, more conventional tour in 1976, the Revue outgrew that approach; both the boxed set and film stick to the initial Revue.) The concerts themselves rambled through their multi-performer bills, often stretching to three or four hours, taking on local guests at whim.

Someday there ought to be a reissue of a full-length, single-night Rolling Thunder Revue concert recording, opening acts and all. The new box is not that. It collects only Dylan’s own appearances — rehearsals, five professionally recorded shows and a final disc of rarities and outliers, like the piano-pounding “Simple Twist of Fate” recorded at the Mah-jongg Parlor in Falmouth, Mass.

The Revue presented itself as an informal hootenanny, but it was a self-conscious one. With a film crew in tow, the shows were also intended to provide material for the amorphous “Renaldo and Clara,” a film that ran nearly four hours when it was released in 1978 and met with near-universal derision. With a script credited to Dylan and the playwright Sam Shepard, “Renaldo and Clara” jumbled documentary and staged scenes, and it scrambled identities; Dylan is billed as Renaldo while the rockabilly singer Ronnie Hawkins plays “Bob Dylan.”

Pragmatically speaking, virtually all of the peak moments of the new set were collected on the well-chosen 2002 “Live in 1975” set. Yet Dylan completists will likely cherish newly unveiled rehearsal tapes that include a tantalizing, previously unreleased minute-long fragment of a vanished song, a hymn-like tribute to a woman named “Gwenevere.” Dylan scholars can tabulate Dylan’s continual tweaks to lyrics in songs like “Tangled Up in Blue,” “Knockin’ on Heaven’s Door,” “Tonight I’ll Be Staying Here With You” and, in rehearsals, “She Belongs to Me.”

For those willing to dig in, the new box also makes clear how consistently impassioned Dylan’s Rolling Thunder performances were. The songs were rehearsed but never routine; they changed tempos and attitudes from night to night. Along the way, they grew more dramatic, more forceful and more jocular, all at once.

A year before Rolling Thunder, Dylan had played his first full tour since 1966, reuniting with the Band for a triumphant sequel to the tour that had drawn boos from die-hard folkies when he went electric. By 1974, no one was booing. The Band had established its own indelible catalog of earthy, mysterious Americana, and Dylan had clearly won every bygone battle against folky purism. Their shared tour was a victory lap, but it was also a sure thing, a standard mid-70s tour by major stars: two months playing impersonal arenas in major markets. Rolling Thunder would be something else — a deliberate glance back for an experiment going forward.

As early as 1964, with “My Back Pages,” Dylan explicitly repudiated the topical protest songs he wrote during his folk-revival ascent. From the mid-1960s onward he had plugged in to the blues, veered into country, made contrarian easy-listening tracks on “Self-Portrait” and hinted at gospel on “New Morning.” After touring with the Band, he recorded one of his unquestioned masterpieces, “Blood on the Tracks,”exploring lost love and perpetual restlessness in skeletal arrangements. But then, with the Rolling Thunder Revue, he decided to reconnect with what he had left behind.

He gathered Greenwich Village folk revival and Beat Generation figures who had been his early 1960s mentors and peers: Joan Baez, Ramblin’ Jack Elliott, Bob Neuwirth and the poet Allen Ginsberg, who appears in the film as a philosophical sage. The film catches a prelude to the tour with Dylan and Baez singing at Gerdes Folk City in Greenwich Village, where Dylan had made his reputation back in 1961. But it was 1975; also shown performing there was Patti Smith.

In the movie, in theaters and on Netflix this week, Dylan himself starts to explain, saying that he wanted to do something “in the traditional form of a revue,” before cutting himself off.

“I don’t have a clue,” he says. “It’s about nothing, it’s just something that happened 40 years ago. I don’t remember a thing about Rolling Thunder — it happened so long ago, I wasn’t even born.”

This unexpected response sets the tone for an unconventional film about an unprecedented tour. The year before, Dylan had returned to the road for the first time in nearly a decade, accompanied by the Band for a series of concerts that broke ticket-sales records but proved musically unsatisfying. In his autobiography, Levon Helm of the Band wrote that the tour “was damn good for our pocketbooks, but it just wasn’t a very passionate trip for any of us.”

Dylan returned to Greenwich Village and started turning up at clubs, seeking out the sense of musical adventure and community that had initially drawn him to New York City. He assembled a new band of young unknowns, recorded what would become the “Desire” album and dreamed up a different way to tour.

Roger McGuinn, formerly of the Byrds, recalled in a recent telephone interview that when Dylan visited him at his Malibu home, “he said he wanted to do something like a circus, but he didn’t elaborate.”

The Rolling Thunder Revue hit the highway, booking halls in New England and Canada a few days in advance and selling its own tickets. Dylan’s boyhood friend Louie Kemp, who made his fortune in the seafood business, served as tour manager, and over 40 days, the top-billed Joan Baez, Ramblin’ Jack Elliott and Bob Neuwirthand others played 31 shows, some stretching four hours long, in 23 cities. (The tour nominally picked up again in 1976, playing bigger venues in the South and West. The film is accompanied by a 14-CD box set with performances and rehearsals from the first tour.)

“I think the tour was unique in that it tried to expand the conventions of what a music show would be at that time,” Scorsese wrote in an email. “So there were poets, filmmakers, playwrights, and all sorts of different musicians.”

The team behind the new movie decided that such an unusual expedition required something beyond a linear documentary. Most notably, the film creates several fictional characters. They represent some of the archetypal figures that surround a rock ’n’ roll tour and are included without comment alongside interviews with Rolling Thunder alumni. 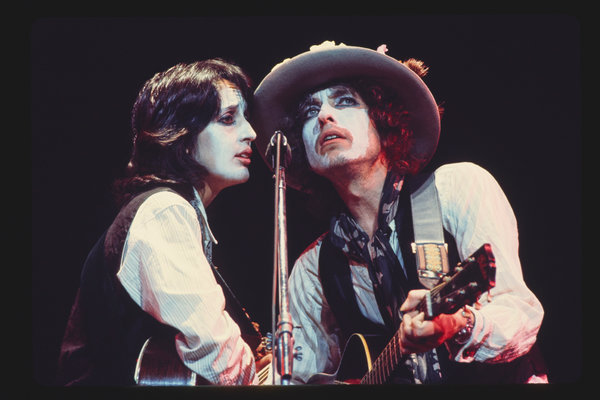 Sharon Stone (credited as the Beauty Queen) recounts being brought backstage as a teenager. Jim Gianopulos, the chairman and chief executive of Paramount Pictures, acts the part of the Promoter. In a kind of filmmaking in-joke, Michael Murphy reprises his role as Jack Tanner from the HBO series “Tanner ’88,”appearing as an idealistic young congressman “caught between two generations” who attends a Rolling Thunder show with help from Jimmy Carter.

One obvious issue is why so much footage exists of the tour, both onstage and off. The truth is that along the way Dylan was making a largely improvised film, which was released as “Renaldo and Clara” in 1978 and savaged by critics. (The original negatives were lost, so Scorsese’s team painstakingly restored the work print, striving to clean the images but retain the grit of vintage 16-millimeter film.)

Rather than get into that story, though, we are told that a filmmaker (played by Martin von Haselberg) was shooting a self-financed movie “about the America of Pet Rocks and Super Slurpees,” but wound up antagonizing the musicians; von Haselberg’s voice is even cut into several quick backstage exchanges.

“When you are working in the midst of a large project, everything around the edges becomes a blur,” said Scorsese, who also directed “No Direction Home,” the 2005 Dylan documentary. “Characters come and go, and you are not sure exactly what they are doing, but you sense their presence.

“We wanted to recreate some of that feeling, but at the same time we also wanted to expand the boundaries of what this kind of film could be. You see it all the time on news shows and in contemporary films of this nature. There will be an animated segment or a recreation. All ways of getting at the truth. We wanted to take that one step further.”

This treatment may prove controversial as history, but it’s certainly fitting for a tour that was largely identified by its theatrical structure and use of masks and makeup.