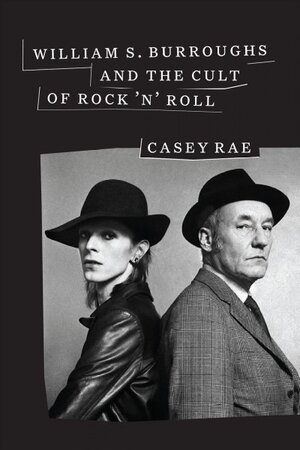 William S. Burroughs and the Cult of Rock ‘n’ Roll

The role William S. Burroughs played in shaping literature is well known. But his influence on rock and roll hasn’t been as well-documented.

Casey Rae’s William S. Burroughs and the Cult of Rock ‘n’ Roll single-handedly changes that. Relying on a wealth of magazine interviews, biographies, books, phone calls, emails and personal interviews, Rae deftly maps out how one of America’s most controversial literary figures — a homosexual drug addict with a penchant for guns who shot his wife in the head — transformed the lives of many notable musicians. He thus helped, without trying, to shape the history of audio recording, punk, industrial music, and rock and roll.

Burroughs rose to fame while working on the fringes of mainstream literature during the Beat era. Today he is know for novels like Naked Lunch, Junkie, Queer, The Wild Boys, The Soft Machine, and The Ticket that Exploded, among others. All of them have been widely read, taught, copied and translated. However, Naked Lunch, regarded as his masterpiece, was banned upon publication for being obscene. The novel’s bizarre topics, outré characters, wild situations, sexual content, and nonlinear structure perfectly mirrored Burroughs’ personality, tastes, and beliefs — all of which appealed to the most daring, innovative musicians of the 1960s, ’70s, and ’80s.

For pioneering musicians, hanging with Burroughs became a rite of passage, a sort of logical step in a life spent looking for extreme experiences and new artistic frontiers. Furthermore, Burroughs’ cut-up techniques for producing lyrics as well as sounds influenced a plethora of artists in many mediums. In Rae’s words, “Burroughs people tend to find one another. And then they form bands.” These people included luminaries like Bob Dylan, Patti Smith, Kurt Cobain, Michael Stipe, Thurston Moore, David Bowie, Lou Reed, and many others.

Rae, a musician, professor, and cultural critic, is a music lover and a Burroughs fan. Both things shine through in this book. He writes with the passion of a teenager discovering new sounds, and the control and self-assuredness of a seasoned academic. Between external sources and his own research and phone and email interviews, Rae creates a complex, rich picture of Burroughs’ life, focusing on his meetings with musicians and the way his techniques and ideas infiltrated them and changed the way they looked at the world as well as their own work. While doing this, Rae stays true to history and always presents Burroughs’ duality; shaman and madman, writer and hermit, traveling man and depressed genius. The mixture came to embody rock and roll:

Simply put, Burroughs embodied the rebellious spirit of rock and roll, and that attracted those for whom rebellion was the only conceivable choice in life.

While the focus is on music and Burroughs’ techniques and ideas, William S. Burroughs and the Cult of Rock ‘n’ Roll is also a biography. Rae deals with the most crucial events in the writer’s life. From his homosexuality to the history of his novels, this book adds to the Burroughs canon in a unique way. Rae is a professional and an academic, but the writing here, especially when dealing with music and some of the most traumatic moments in Burroughs’ career, flirts with literary fiction without even abandoning the real of nonfiction. A perfect example comes from his discussion of the killing of Burroughs’ wife, Joan Vollmer, who the author shot in the head while allegedly undertaking a William Tell trick they often performed at parties. While drunkenness and drug use muddled the memories of the event for many — and Burroughs himself went back and forth on what happened — the consensus, according to Rae, is that Burroughs accidentally missed the shot:

Reading William S. Burroughs and the Cult of Rock ‘n’ Roll makes it easy to see why Burroughs was so influential on avantgarde creators. He believed there was a major hegemonic force at play in the world. He called this force Control, and considered it the primary enemy keeping people from spiritual and psychic liberation:

In other words, Burroughs’ entire belief system was the core of rock and roll, the blueprint for artistic rebellion. William S. Burroughs and the Cult of Rock ‘n’ Roll celebrates not only the gifted mind and bizarre life of a writer who changed literature forever with his magic and ideas; it also finally gives him the place he deserves in the pantheon of rock and roll.

Gabino Iglesias is an author, book reviewer and professor living in Austin, Texas.