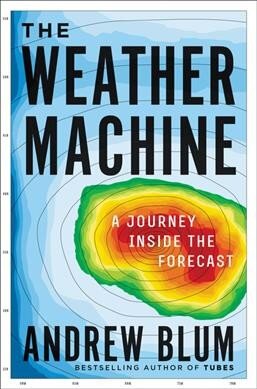 A Journey Inside the Forecast

Today, you can pull out your phone and know the weather a week in advance.

That’s pretty neat. And it’s all because weather forecasting — specifically, the supercomputer-driven modelling which crunches huge amounts of data and predicts future outcomes — has gotten really good. A six-day weather forecast today is as good as a two-day forecast was in the 1970s.

Andrew Blum wanted to know how those forecasts got made, and his curiosity led him to research and write The Weather Machine: A Journey Inside the Forecast. He says he first got the idea for the book when he saw a forecast for Hurricane Sandy eight days in advance of its arrival.

“That length of that time just seemed astonishing to me,” Blum says. “And it also seemed crazy to me that it wasn’t the expert hurricane forecasters, you know, sort of putting the pieces together in their minds — it was really the outputs of these computer models that they are responding to.”

In an interview, he explains the international network of forecasting systems — and the threat that privatization poses to that network.

On weather forecasting being both banal and extreme

The funny thing about the topic of the weather is there’s both incredibly banal moments — you know, getting caught in the rain, the canceling picnics — and then the swings to these incredible extremes, you know, with millions of people displaced, with billions of dollars of damage. And the weather models in the forecast have to serve both. And it’s remarkable to me as well that one of the things that’s happened as the scale in the system has shifted to the computers is that it’s no longer bound by past experience. It’s no longer, the meteorologists say, “Well, this happened in the past, we can expect it to happen again.” We’re more ready for these new extremes because we’re not held down by past expectations.

On how the systems work

The first thing is to know what the weather is, so you can know what the weather will be. That’s the crux of it. So you need as complete observations of the global atmosphere as possible, which means coming from satellites and weather buoys and from sensors on airliners. And then once you know what it is, what you can do is then begin to run it forward in time. But rather than just being plugged into the supercomputers — you know, in comes the present and out comes the future — the models are really a kind of ongoing concern. … They run ahead in time, and then every six hours or every 12 hours, they compare their own forecast with the latest observations. And so the models in reality are … sort of dancing together, where the model makes a forecast and it’s corrected slightly by the observations that are coming in.