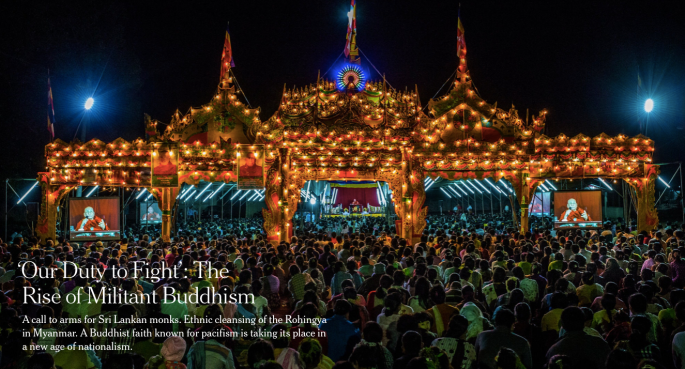 Thousands of Buddhists listening to Sitagu Sayadaw, one of Myanmar’s most revered Buddhist leaders, also known by his monastic name Ashin Nyanissara, in Paleik, Myanmar, in November 2017. Credit Minzayar Oo for The New York Times

GINTOTA, Sri Lanka — The Buddhist abbot was sitting cross-legged in his monastery, fulminating against the evils of Islam, when the petrol bomb exploded within earshot.

But the abbot, the Venerable Ambalangoda Sumedhananda Thero, barely registered the blast. Waving away the mosquitoes swarming the night air in the southern Sri Lankan town of Gintota, he continued his tirade: Muslims were violent, he said, Muslims were rapacious.

“The aim of Muslims is to take over all our land and everything we value,” he said. “Think of what used to be Buddhist lands: Afghanistan, Pakistan, Kashmir, Indonesia. They have all been destroyed by Islam.”

Minutes later, a monastic aide rushed in and confirmed that someone had thrown a Molotov cocktail at a nearby mosque. The abbot flicked his fingers in the air and shrugged.

His responsibility was to his flock, the Buddhist majority of Sri Lanka. Muslims, who make up less than 10 percent of Sri Lanka’s population, were not his concern.

Incited by a politically powerful network of charismatic monks like Sumedhananda Thero, Buddhists have entered the era of militant tribalism, casting themselves as spiritual warriors who must defend their faith against an outside force.

Their sense of grievance might seem unlikely: In Sri Lanka and Myanmar, two countries that are on the forefront of a radical religious-nationalist movement, Buddhists constitute overwhelming majorities of the population. Yet some Buddhists, especially those who subscribe to the purist Theravada strain of the faith, are increasingly convinced that they are under existential threat, particularly from an Islam struggling with its own violent fringe.

As the tectonic plates of Buddhism and Islam collide, a portion of Buddhists are abandoning the peaceful tenets of their religion. Over the past few years, Buddhist mobs have waged deadly attacks against minority Muslim populations. Buddhist nationalist ideologues are using the spiritual authority of extremist monks to bolster their support.