Temperature differences from normal during June globally, according to NASA.
By Jason Samenow and
Andrew Freedman

Boosted by a historic heat wave in Europe and unusually warm conditions across the Arctic and Eurasia, the average temperature of the planet soared to its highest level ever recorded in June.

The month was punctuated by a severe heat wave that struck Western Europe in particular during the last week, with numerous all-time-hottest-temperature records falling in countries with centuries-old data sets.

Notably, 13 locations in France surpassed their highest temperature ever recorded. The heat wave’s highest temperature of 114.6 degrees Fahrenheit (45.9 Celsius), posted in Gallargues-le-Montueux, was 3.2 degrees above the old record, set during an infamous heat wave in July and August 2003.

NASA is the second institution to confirm that it was Earth’s hottest June, as the Copernicus Climate Change Service had already determined that June 2019 was the warmest such month on record for Europe and globally.

June featured unusually mild conditions in the Arctic, particularly in Greenland, where the melt season got off to an early start.

July is picking up right where June left off. Zeke Hausfather, a climate scientist based in Berkeley, Calif., tweeted that the month so far ranks as the hottest on record narrowly ahead of 2017, the previous record holder.

“If this July turns out to be the warmest July (it has a good shot at it), it will be the warmest month we have measured on Earth!” tweeted Michael Mann, a climate scientist at Pennsylvania State University.

NASA global mean June temperature is out! Guess what – it’s been the hottest June on record. Definitely felt like that in Germany… #climatecrisis #FridaysForFuture 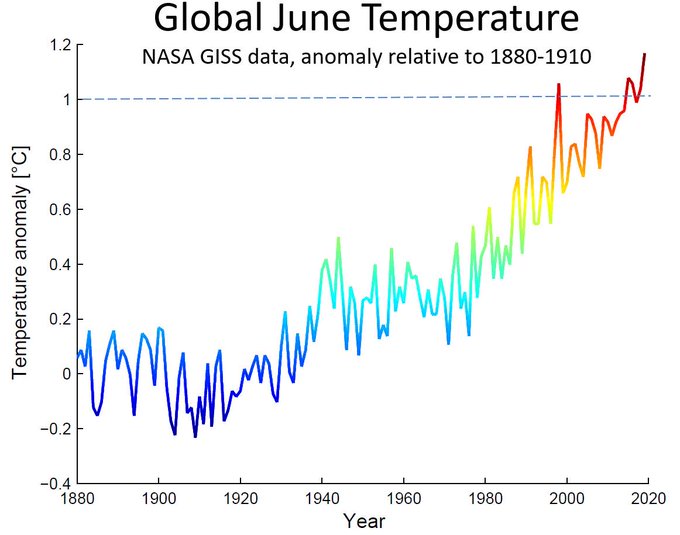 Like June, July has featured some notable high-temperature extremes, including in Nunavut, Canada, the northernmost permanently inhabited location on Earth. It hit a record high of 69.8 degrees Fahrenheit (21.0 Celsius) Sunday, breaking the previous record of 20 Celsius.

In addition, Alaska last week posted its hottest two days on record, highlighted by a temperature of 90 degrees in Anchorage for the first time.

The June monthly record and July’s toasty first half raises the odds that 2019 could make a run for a top-three finish for warmest year, rather than top five. According to data from NASA and the National Oceanic and Atmospheric Administration, nine of the 10 warmest years on record have occurred since 2000, a trend that scientists have tied mainly to human emissions of greenhouse gases. 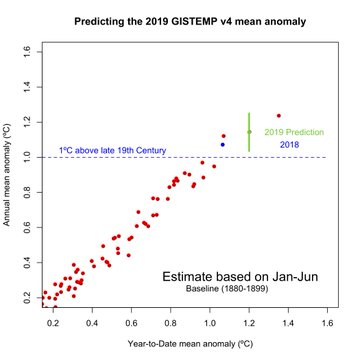 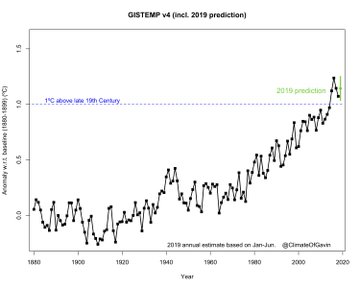