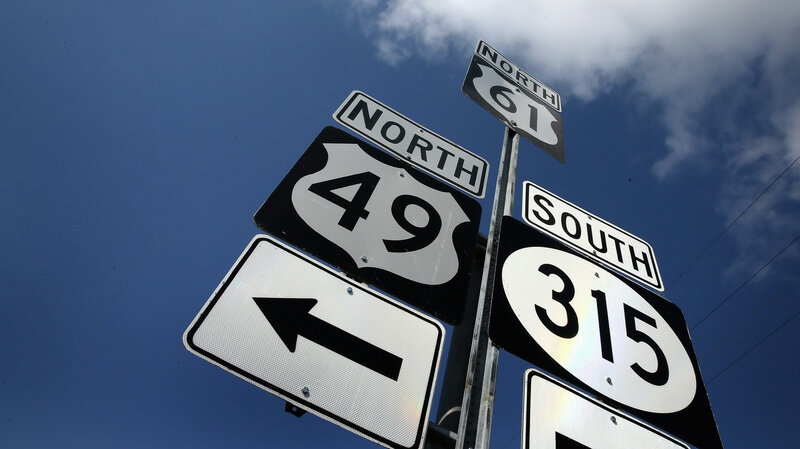 A sign marks an intersection of Highways 61 and 49 near Clarksdale, Miss.

The Riverside Hotel in Clarksdale, Miss., is located on Sunflower Avenue, a street that winds along with the curves of the silty Sunflower River. The compact brick-fronted building leans down the rise with one story at street level and the second, lower one crouched behind and underneath. Since 1944, the Riverside has been a modest layover for travelers. Seven years before that, though, it was still the G.T. Thomas Afro-American Hospital, a facility earmarked for black patients under Jim Crow law, and it was in the fall of 1937 when Bessie Smith died there, after a car accident on Highway 61 on the way from Memphis to Clarksdale — a stretch of about 75 miles well-traveled by performers during the days of the chitlin circuit. Some accounts of Bessie Smith’s last hours add the detail that her ambulance was turned away from a segregated hospital en route, and the extra miles she spent riding, injured, sealed her fate.

But that’s a dramatic embellishment to an already tragic story. Smith was a star at the time of her death, a quantified success. She had been a headliner on the Theatre Owners Booking Association black vaudeville circuit, had starred in the two-reel 1929 talkie St. Louis Blues and had sold hundreds of thousands of records. Still, any blues historian will tell you, no ambulance driver would have even tried to stop, under Jim Crow law in 1937, at a white hospital with a black patient.

On Easter Sunday 2019, the river behind the Riverside is so still at low tide it looks like slick, coffee-colored dirt, with trees rising up out of its banks adding to the impression that water is land. The building seems to sit placidly, almost dipping its haunches in the river. Out front, there’s a marker from the state of Mississippi’s Blues Trail project, a heavy dark-blue placard trimmed in brassy filigree and emblazoned with images and text about the site’s importance — it became a hotel in 1943 and hosted Muddy Waters, Howlin’ Wolf and Sam Cooke, among others — as well as Smith’s death.

The Mississippi Delta, especially as defined by the official blues markers that help guide tourism, is really not all that big: From their junction in Clarksdale, highways 49 and 61 branch out like a wishbone. At the widest part, it takes less than an hour to cut across from Greenwood – the likeliest burial spot for Robert Johnson – to Greenville, which has several Blues Trail markers of its own. It only takes about six hours to shoot straight from Memphis down to New Orleans, although, of course, for fans of the evolution of American popular music, there are plenty of places to dally in between. And it’s a strange landscape, if you take 61 or 49 instead of the interstate. The miles roll on at a sedate speed limit, lanes bordered on either side by wet rice fields or dry brown acres knobbly with cotton bolls.

These are the kind of roads Bessie Smith’s car was on when it crashed north of Clarksdale, and they don’t look much different today. A Blues Trail smartphone app makes it easy to navigate between sites like the B.B. King Museum in Indianola, with its state-of-the-art interactive digital music exhibits or the squat white buildings of the old Parchman Farm, which is still the operating Mississippi State Penitentiary. It’ll take you to the little churchyard in Greenwood that always seems to be slightly flooded, where the Robert Johnson grave marker is laden with liquor bottles, flowers, handwritten notes and on a weekend last spring, a silver watch draped over the granite.

There’s the Dockery Farm plantation, too, where Charley Patton once worked in the fields and played music, a lushly green site that buzzes with insect noise between three or four creaky wooden buildings. Inside the old cotton gin, next to the machinery, a screen plays a short documentary film about the last generation of Mississippians who lived and worked on the plantation, in the middle of the 20th century. You press a button and it loops, and if nobody is there, the voices just keep going inside the weathered walls, telling their stories to the empty humid air.

The Delta, and Clarksdale in particular, trades in stories. Especially the tricky story of the blues, itself a vehicle for the tales of the country’s most marginalized people. After all, black women like Bessie were the first stars of recorded blues, garnering fame and fortune with plainspoken songs from a point of view that had historically been silenced to the extreme. Sometimes this public storytelling, the version of history put out there for a steady stream of blues tourists, works great: the official Blues Trail markers, written by regional historians, are thorough and thoughtful. But sometimes, not so much. Over at the Riverside, there’s another sign hanging up, a stylized portrait on metal marked “Bessie Smith.” The image on it isn’t Bessie; instead, it seems to be a widely-used photo of rhythm-and-blues singer LaVern Baker. (More on that later.)

Scott Barretta, a sociologist and blues specialist who teaches in the University of Mississippi’s Center for the Study of Southern Culture (in Oxford, Miss., just 60 miles from Clarksdale) estimated that local investment in blues tourism technically began in 1979, when the local public library installed a temporary blues exhibit. It got its own wing in 1996 and in 1999, it moved to its current location as the Delta Blues Museum in an old railroad depot, whose address was reassigned as “One Blues Alley.” (Two years later, when the Clarksdale-born actor Morgan Freeman opened the Ground Zero blues nightclub down the street, it got the address of Zero Blues Alley).

The late ’80s brought the Sunflower River Blues and Gospel Festival, co-founded by Jim O’Neal and Patty Johnson. In 1970, O’Neal and his then-wife Amy van Singel, both variously blues authors and journalists, radio hosts and record producers, had also started Living Blues magazine; according to Barretta, who researches and writes much of the information on the markers, before the Blues Trail, O’Neal’s self-published Delta Blues Map Kit was the essential area guide for fans. 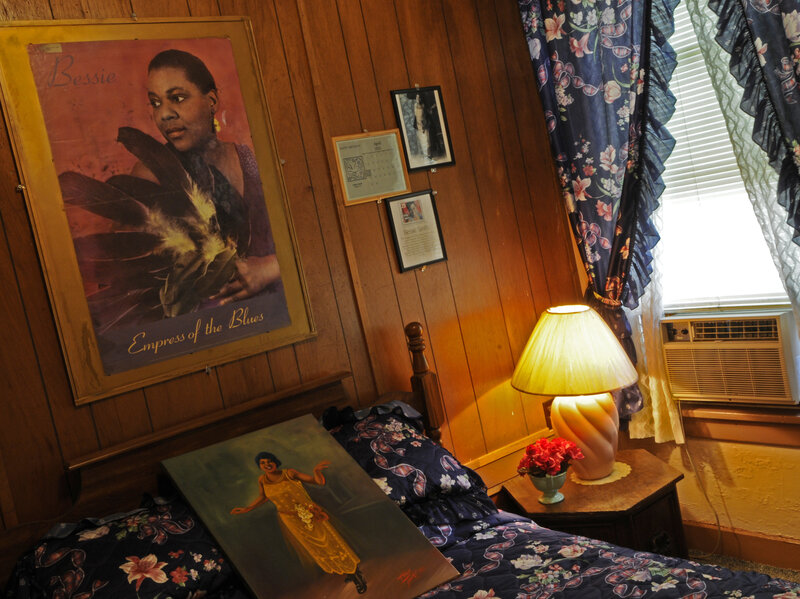 What used to be the G.T. Thomas Afro-American Hospital, where Bessie Smith died after a car crash on just north of Clarksdale in 1937, is today a no-frills hotel called the Riverside.

By the turn of the millennium, blues tourism in the Delta was gaining traction. The early 2000s brought an officially proclaimed “Year of the Blues” (2003) and the establishment of a state blues commission, which laid groundwork for the Blues Trail effort. There were new events, like the Juke Joint Festival and the Deep Blues Festival, drawing a steady influx of tourists to Zero Blues Alley and its environs in downtown Clarksdale which — although it’s still a pretty empty-looking place — is populated with record and bookstores and folk art galleries all dedicated to the blues. On any given weekend you can hear tourists murmuring to one another in half a dozen languages. The international draw isn’t limited just to listeners, either. One night at Ground Zero, I sat beside a group of Germans, watching the Belgian singer onstage take on rhythm-and-blues songs from New Orleans.