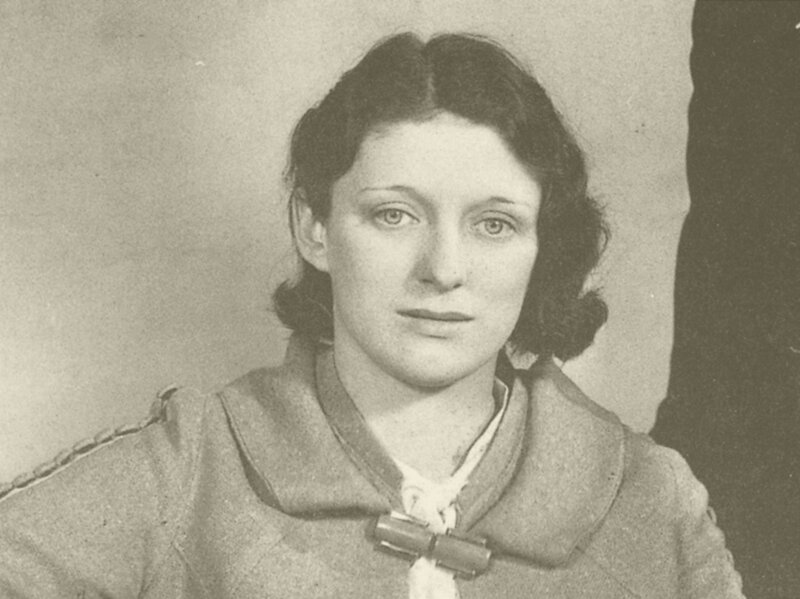 Maybelle Carter joined with the Carter Family in 1926.

Listen to this playlist on Spotify or Apple Music

Born in the Appalachian Mountains of southwest Virginia in 1909, Maybelle Carter grew up in a musical family. Playing music at home and in her rural community were common childhood activities for her. She had a natural talent and was able to learn several instruments, including two for which she would become very well known: autoharp and guitar.

In 1926, she married Ezra Carter, brother of A.P. Carter, who had married Maybelle’s cousin Sara in 1915. A.P. had an entrepreneurial spirit and had begun traveling throughout the mountains to collect songs. Often his companion on these trips was an African American guitarist named Lesley Riddle. In an interview with Mike Seeger from 1965, Riddle said, “If I could hear you sing, I could sing it too. I was his tape recorder. He’d take me with him and he’d get someone to sing the whole song. Then I’d get it and learn it to Sara and Maybelle.”

In 1927, A.P. became intrigued by an advertisement he saw for an upcoming Victor Talking Machine Company recording session that was to take place in Bristol, Tenn. He encouraged Maybelle and Sara to take the trip to Bristol with him so they could audition and possibly record songs as the Carter Family. They attended the session and recorded six songs over two days, August 1 and 2, 1927, capturing the sound of their three-person group: Sara’s voice and autoharp, A.P.’s arrangements and vocals and Maybelle’s guitar. These records were nationally distributed and gave listeners an opportunity to hear the musical sounds of rural, Southern Appalachia. Audiences responded well: The recordings were very popular and created a demand for more country music to be recorded. These sessions, known as the Bristol Sessions, produced not only the Carter Family but also superstar Jimmie Rodgers. Those several days in 1927 would become known as the Big Bang of Country Music.

As the popularity of the Carter Family grew so did the awareness of Maybelle’s guitar playing style which received several nicknames with the most popular being the “Carter Scratch.” Before Maybelle introduced her style of playing, guitar was often a background rhythm instrument. Her innovative technique involved playing a bass line while simultaneously playing chords, creating the sound of multiple guitars from just one instrument. The Carter Family’s unique sound, with Maybelle providing both rhythm and melody, changed the way guitar would be used in bands from that point forward.From 1927 to 1941 the original Carter Family recorded 292 songs. They traveled from their homes in Virginia to recording studios in Camden, NJ; Atlanta, Ga.; Memphis, Tenn.; Charlotte, NC; Louisville, Ky.; New York, NY; Chicago, Ill. and performed old-time ballads, traditional folk music, country songs and gospel hymns.

By the mid-1930s the Carter Family’s record sales had slowed down. In 1938, when the opportunity to perform five days a week on the radio was presented, they took it. The money was good, and the exposure was huge — XERA was an over 500,000 watt radio station. Known as a “border-blaster,” the station was located in northern Mexico just over the Rio Grande River. The station’s broadcast was reported to reach up the Mississippi River into Canada, and as far east as Florida and New York City. With radio’s growing popularity, the wide reach of this station offered the Carter Family a level of exposure they had never experienced before. In 1939, the Carter Family returned to XERA for a second season of on-air performances. Maybelle brought all three of her daughters to perform with her on the air. This would be their last season performing on XERA, as it was shut down by the Mexican government in early 1941. A few years later, in March 1943, the last of their other radio performance contracts expired and the original Carter Family stopped playing together.

Maybelle was already on her way to evolving the group from the original Carter Family into the Mother Maybelle & the Carter Sisters. This group was comprised of Maybelle and her three daughters, Helen (born in 1927), June (born in 1929) and Anita (born in 1933). Maybelle had a dedication to touring and performing that was often discouraged for women at the time. Helen Carter told Archie Campbell in a 1983 interview: “I can remember when mother started out with us Aunt Sara would say, ‘May, When are you ever going to settle down and stay home like you should?’ And that was not for mother, she enjoyed every minute.” Maybelle continued to perform with her daughters on radio programs and television shows. They toured and performed together for many years, often on radio and television shows. Mother Maybelle & the Carter Sisters made studio recordings and became regulars on the Grand Ole Opry. Anita Carter sang a duet of “I Can’t Help It If I’m Still in Love with You” with Hank Williams in 1952 on the Kate Smith Evening Hour television show. They opened for Elvis Presley in 1956 and 1957, and in 1961 they joined the Johnny Cash Roadshow.

Maybelle Carter was a pioneer of guitar playing and style. She was the first woman inducted into the Country Music Hall of Fame, along with her bandmate and cousin, Sara Carter. Their plaque states that the Carter Family are “regarded by many as the epitome of country greatness and originators of a much copied style.”