SANTA FE, N.M. — Who gets to make art? The question was posed recently on Instagram by Luke Syson, director of the Fitzwilliam Museum in Cambridge, England. In asking it, Mr. Syson was adding his voice to a growing chorus of museum professionals who are challenging traditional hierarchies of art production. He was talking, in this instance, about the obscure craft of scrimshaw, subject of a fine study show at the Fitzwilliam, but more broadly about the importance of recognizing and celebrating those gifted artists whose work is so often relegated to the stepchild status of crafts.

As I stood in a tent on hot July afternoon in this high desert city, I was nagged by Mr. Syson’s question. Planted in sand on three folding tables were the creations of Leandro Gómez Quintero, one of 178 individuals from 52 countries gathered for the 16th annual edition of the influential and popular International Folk Art Market.

Mr. Gómez’s artworks had made the trip to the United States without him since visa restrictions prevented the one-time history teacher based in Baracoa, a small city on the eastern tip of Cuba, from attending. And yet the artist’s presence could be felt in the works he’d sent — eccentric and vaguely obsessional scale models of the vintage vehicles that have come to stand as visual shorthand for Cuba’s anachronistic position on the

Politics, history, and the irresistible urge to create from the most meager of resources were all coded into the miniature versions of vehicles such as the once-ubiquitous Jeep CJ, or the customized flatbeds responsible for transporting cattle, lumber and humans along the rutted roads that remain the lifeline of the island nation. Each had been created from refuse and materials Mr. Gómez scavenged: foam core, paper clips, scrap plastic, Duct tape, Styrofoam packing materials, Popsicle sticks and twine. 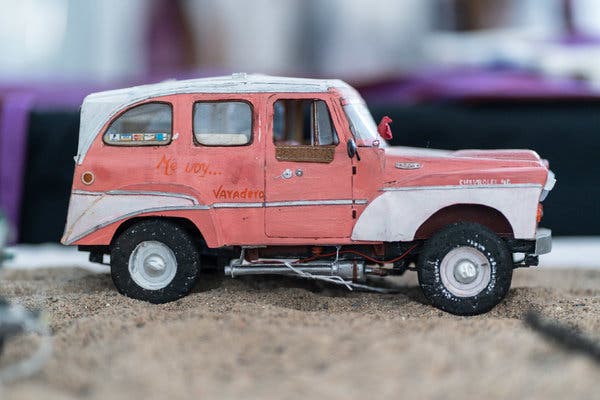 A model car painted and detailed by artist Leandro Gómez Quintero.CreditRamsay de Give for The New York Times

“For me, this is the essence of folk art,” said Stuart Ashman, my guide that afternoon. A former cultural affairs secretary of New Mexico, Mr. Ashman now serves as chief executive officer of a market whose goal is to bring exposure both to practitioners of traditional crafts as well as visionary eccentrics like Mr. Gómez. “It comes out of nowhere, out of nothing,” he added. “There’s not a tradition for it. It’s just some guy saying, ‘I want to make this thing.”

Often enough, as it happens, the person with that driving desire to make something new and untested is a woman. Consider, for instance, the celebrated pineapples of Carapan. So closely are these powerful objects identified with Mexican folk art at its highest levels that when in 2001 the cultural arm of Banamex bank organized a show titled “Great Masters of Mexican Folk Art” and published a hefty 551 page book to accompany it, one of the craftsman Hilario Alejos Madrigal’s pineapples was chosen for the cover.

And, for a starkly abstract room-sized rug by the Oaxacan weaver Juan Isaac Vásquez García — a textile whose every element, from the shearing, carding and spinning of the wool to the vat-dyeing of the yarn and the weaving itself, is done by hand — the price is just a few dollars more.

“I’ve been weaving since I was 7,” Mr. Vásquez, 84, and widely known by the honorific Don Isaac, said in a moment of quiet before the hordes of visitors rushed in (more than 20,000 people attended this year). For generations, Mr. Vásquez’s family had practiced a craft that dominates Teotitlan del Valle, a village in the foothills of the Sierra Juarez mountains just outside Oaxaca.

By Mr. Vásquez’s estimate, there were over 800 weavers from which to choose when, in the late 1960s, the painter Rufino Tamayo came in search of someone to collaborate in making tapestries. “All of a sudden, maestro Tamayo showed up, and I didn’t know who he was,” Mr. Vásquez said. What first drew Mr. Tamayo to Mr. Vásquez was his unconventional use of natural rather than synthetic dyestuffs.

“He asked me what red I was using, where did I get this in the wild?” Mr. Vásquez added. “At the time I was going to stop working with the natural dyes because nobody was buying,” Mr. Vásquez said. Encouraged by Tamayo, Mr. Vásquez entered into a decades-long partnership with the famed muralist. “I still didn’t know if I was doing a good thing or a bad thing,’’ said Mr. Vásquez. “I really never thought of it as art.”

For the master embroiderer Asif Shaikh, 51, his identity has seldom been in question, he explained one afternoon at the market. Born and raised in Ahmedabad in northwestern India, the self-taught artist has actively campaigned for a revised understanding of what constitutes art, using his knowledge of Indian embroidery techniques to promote innovation in a craft that, as he put it, “was on its last legs at the end of the 20th century.” For a recent traveling exhibition of his work, inspired by the Sufi saint and poet Farid ud-Din Attari’s allegorical masterpiece “The Conference of the Birds,” Mr. Shaikh created embroidered panels using beetle wings, peacock feathers, silk thread no wider than a human hair.

“My dream is to put crafts in the same conversation when we talk about art, because artists always get full mileage” in the cultural conversation, Mr. Shaikh added, whereas — in India, at least, “They never made craft into a brand as a branch of art.”