In 2013, a mutual friend brought Kat Vollinger and Nathan Richman together as rock climbing partners. Within a few years, they were married, and their shared love of climbing led them on adventures around the world. That’s how, in March 2018, they found themselves scaling Castleton Tower, a nearly 400-foot sandstone spire near Moab, Utah, with a seismometer in tow.

They helped scientists measure, for the first time, how Castleton Tower taps into the earth’s natural vibrations, finding that it pulsates at about the rate of a human heartbeat.

Castleton Tower is one of many culturally significant desert rock formations that Jeff Moore, a geologist, and his team at the Geohazards research group at the University of Utah have been monitoring with audio recordings. Like a doctor listening to the beating of a human heart, they hope to learn about the structural health of these arches, bridges and towers and how their environments affect them.

In their study, published last month in the Bulletin of the Seismological Society of America, Dr. Moore’s team found that Castleton Tower can withstand quite a bit. They had predicted that such a large structure would vibrate at a lower frequency than a smaller one, much as a thicker guitar string has a lower pitch than a thinner one. Their research suggests that smaller formations that vibrate at a higher frequency may not be as resilient as Castleton appears to be.

“We like to think of it as a voice,” Dr. Moore said. “It’s sort of alive with this vibrational energy.”

One of the world’s largest free-standing rock towers, Castleton sways like a skyscraper in response to deep vibrations in the earth. But while engineers rely on abundant research to understand how buildings respond to such stressors, little is known about how rock structures do.

To assess how Castleton manages, Dr. Moore taught Ms. Vollinger and Mr. Richman to use a seismometer.

They placed one seismometer at the tower’s base and then carried a second to the top, scaling its flat northern face. Placing a seismometer at each location allowed the researchers to distinguish between vibrations coming from the swaying of the tower and the ground around it.

They found that the tower registered pitches of 0.8 and one hertz. It vibrates in a sort of trembling cross, with movement in perpendicular directions, simultaneously. The vibrations measured at the top were 70 times stronger than those at the base. 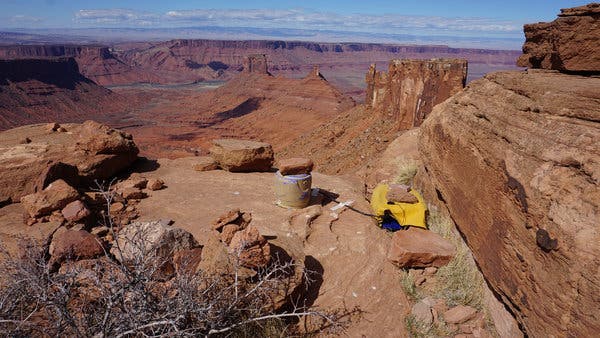 “It was really interesting to learn that they move like that, but I can’t say it was a revelation to learn that the mountains and hills breathe,” said Mr. Richman. “If you spend enough time there, you can see they are moving things.”

And if your ears were sensitive enough, you could hear their endless drone, gaining strength from wind, earthquakes, passing cars and other sounds, said Paul Geimer, a doctoral student who worked on the project. But the pitch is always the same. If researchers were to measure a different pitch in future recordings, it could be an indication that the rock is weakening or that its properties had changed.

But it would take a massive earthquake or a long time for Castleton to crumble, Dr. Moore said. Vibrations from mild and medium seismic events and traffic, both rare here, as well as wind, rock climbers and helicopters, are too small to disturb Castleton. Still, while one helicopter may not do much damage, the team wants to know what cumulative effects human sounds might have over time.

“A lot of people have the sense that rock is rock, and rock is strong, and people don’t affect that,” Dr. Moore said. “These rocks are buzzing with physical energy, and they respond to what we do.”