Rafters on the Hulahula River float past a bank of thawing permafrost in the Arctic National Wildlife Refuge. Credit Christopher Miller for The New York Times

Up in the right-hand corner of Alaska, like something freezer-burned and half-remembered in the back of the national icebox, lies a place called the Arctic National Wildlife Refuge. The refuge is the largest wildlife sanctuary in the United States. It is the size of South Carolina. It is also home to the country’s second-largest wilderness area. It has no roads, no marked trails, no developed campgrounds. The Coastal Plain, the narrow strip where the refuge meets the sea, is home to more diversity of life than almost anywhere else in the Arctic. It is the kind of place where you can pull back the tent flap with a mug of coffee in hand, as I did one morning in June, and watch a thousand caribou trot past.

The animals came slowly at first, by twos and by threes, and tentatively, lifting their black noses to catch the strange scent of 10 unbathed campers. Then they tacked across the river. Near the front was a bull with a rack big enough to place-kick a football through its uprights. Mostly they were females in dun coats, serious mothers leading coltish calves that slid and played on the snowfields that still collared the tundra’s low places. Ungainly in looks, but a natural for work — each hoof a snowshoe, with hollow fur for warmth and to buoy them across gelid Arctic rivers. The calves had been born three or four days ago. Already they could walk farther in a day than a human. 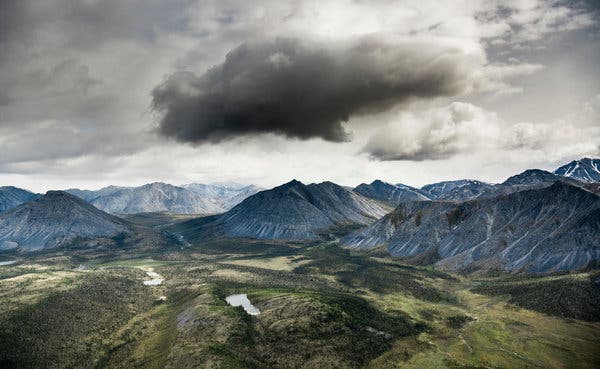 Aerial view of the southern edge of the Brooks Range mountains.CreditChristopher Miller for The New York Times

The few caribou became dozens. They materialized by the hundred out of the heat-shimmer that rose off the tundra, like those lawmen bringing hot justice in old Sergio Leone films. Confident in their numbers, they surged past the encampment, urged by some twitch in the marrow to keep pushing toward the coast where ocean breezes would scatter the mosquitoes and bot flies that soon would torment them. We watched for a long time, not wanting to move and disturb anything.

“This,” someone whispered, “is sacred.”

In late 2017, a Congress controlled by Republicans badly wanted to pass the Tax Cuts and Jobs Act. To help win the crucial vote of Lisa Murkowski, the senior Republican senator from Alaska, the Senate added a sweetener, a provision that opened to oil drilling the refuge’s Coastal Plain, a roughly Delaware-size piece of ground where the Brooks Range reclines and the tundra tilts toward the Arctic Ocean like the baize of an old pool table.