Pittsburgh Mayor Bill Peduto, like mayors all over the country, has experienced firsthand the horrors of mass shootings. The Tree of Life Synagogue massacre in his city last year shocked the nation, but not enough for Republicans to do anything about it. Peduto was in D.C. this week, meeting with senators in support of some kind of action, any kind of action, on guns. One meeting stands out for him as being the “low point of pessimism”: a meeting with Mitch McConnell.

Peduto said he and his small bipartisan group of mayors in the meeting had about three minutes with McConnell, most of which was taken up with introductions and hand-shaking. While his own senator, Republican Pat Toomey, spent time with the mayors and had a real discussion, McConnell brushed them off. “If the meeting with Sen. Toomey was a high point of optimism, the low point of pessimism would have been the meeting with Leader McConnell,” Peduto told reporters. All they got out of him is what he’s been saying publicly—that it’s all up to Trump. “If the president is in favor of a number of things that he has discussed openly and publicly, and I know that if we pass it it’ll become law, I’ll put it on the floor.” We don’t know what he’s telling Trump privately about what he’ll refuse to bring to the floor, with the excuse that he wouldn’t be able to pass it. But we do know McConnell’s long history of fighting gun safety laws.

Even when the massacres happen in his hometown. In 1989, during McConnell’s first Senate term, a disgruntled employee killed eight people and wounded 12 others at Louisville’s Standard Gravure printing press. McConnell said at the time that he was “deeply disturbed” and that “we must take action to stop such vicious crimes.” He also gave the line that he has been parroting for three decades since: “We need to be careful about legislating in the middle of a crisis.” 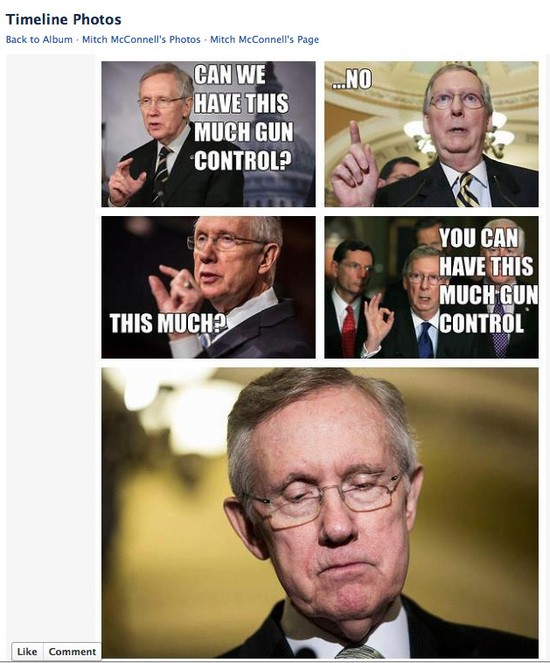 It’s It’s always too soon to be talking about saving lives from gun violence for McConnell because he’s flat-out not going to do it. There will never be a time McConnell thinks is right because he flat-out doesn’t care how many people get killed. Even tiny children. When 20 first- and second-graders and six of their teachers and staff were killed at Sandy Hook Elementary, McConnell led a filibuster against the bipartisan Manchin-Toomey background check bill. Then, about an hour after the vote, his campaign took this meme that Comedy Central had created to show what a monster McConnell is, and put it on its Facebookpage, gloating over it. (It has since been taken down.)

The $1.3 million the NRA has pumped into McConnell’s coffers over the course of his career (and how much of that came from Russia?) is what matters. Nothing else. Certainly not the lives of his neighbors, his constituents, the American people, or tiny children (once they’re born)