The power and the glory of Mahalia Jackson 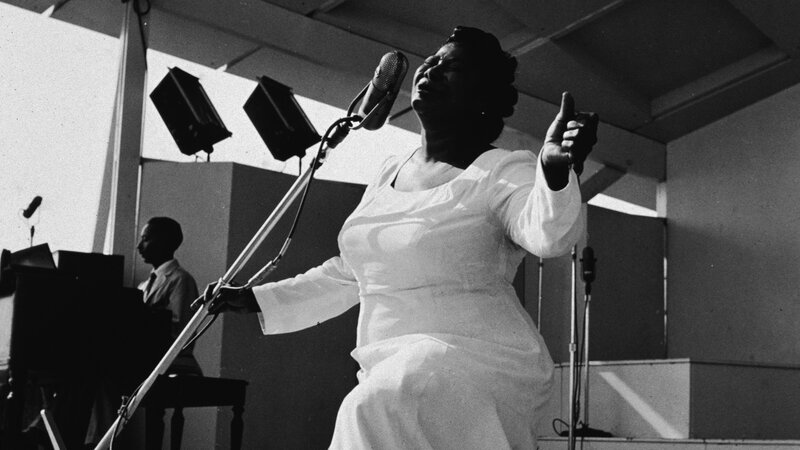 Mahalia Jackson sings at the Newport Jazz Festival in 1957. Mary Lou Williams heard her there and said she felt “cold chills run up and down my spine.”

Pope John XXIII said such nice things to her. The National Baptist Convention was no less captivated, as were the Rev. Dr. Martin Luther King, Jr. and a host of black and white bishops and preachers and worshippers worldwide. The King and Queen of Denmark wanted more. So did the Empress of Japan, four U.S. presidents, Chicago Mayor Richard Daley, broadcaster Studs Terkel, the City of New Orleans, Ed Sullivan and James Baldwin, among others. But for musicians, the best compliments come from other musicians and no one could praise Mahalia Jackson the way that the jazz pianist and composer Mary Lou Williams did at the 1957 Newport Jazz Festival. Williams heard Jackson sing there and said, “That goddamn woman makes cold chills run up and down my spine.”

Jackson had one of the great big, gorgeous voices of the 20th century — maybe the biggest — inducing cold chills and hot springs of unexpected feeling. Unlike many of her contemporaries, she followed an interior compass that kept her locked exclusively onto gospel music. By her calculus, Jackson didn’t budge much from her original sound. She always sang like a bigger-than-life, supremely talented zealot. Her voice and timing and intensity not only rattled black listeners like Williams, but — for the first time — inspired mainstream white listeners to appreciate religious and secular music with a black gospel feel.

“She precedes Sam Cooke and Aretha Franklin,” says music historian Mark Burford, who specializes in 20th Century African-American music at Reed College. His 2019 book, Mahalia Jackson and the Black Gospel Field, re-examines years of scholarship and common assumptions about Jackson, who he believes had a lot to do with why “gospelized voices have become the lingua franca of popular culture.”

Gospel greats Cooke and Franklin expanded their appeal across the color divide when they transitioned to pop music in 1957 and 1960 respectively — without ever fully closing the door on the church. But Jackson introduced herself to white mainstream listeners singing the same songs she would have sung at many a black religious service. Exposing new audiences — virtually anyone with a radio or a television set — to what thousands of Baptist, African Methodist Episcopal and Sanctified congregations heard at church every week made Jackson “a cutting edge model for gospel in the early 1950s,” Burford says. Of course, white Pentecostal worshippers at the time were well acquainted with ecstatic revival singing, he adds. But those styles weren’t the same as Jackson’s operatic runs, moans, note-bending and interpolations.