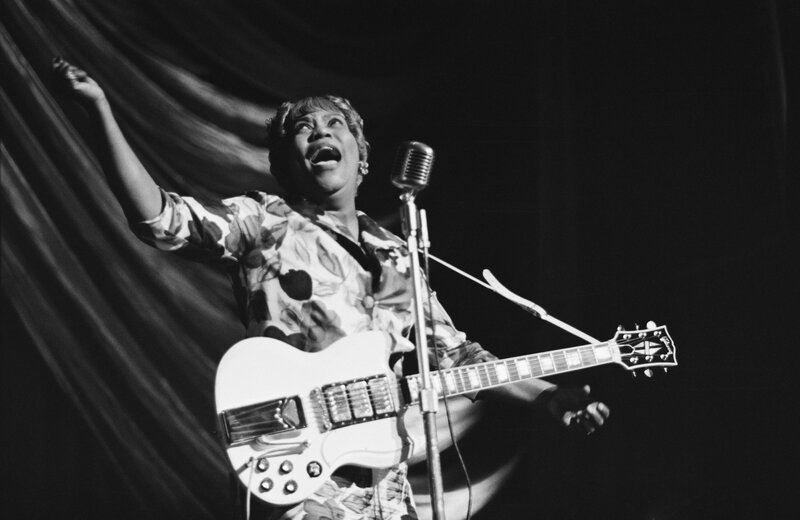 The country’s most distinguished gospel artist, Sister Rosetta Tharpe, arrived in Washington, D.C., to perform a sold-out concert. Sister Tharpe spoke to your reporter before her sold-out concert, sitting on her customized tour bus parked outside the venue. The bus — which Sister Thorpe believes is the first of its kind! — is emblazoned with the words SISTER ROSETTA THARPE – DECCA RECORDING ARTIST, painted in a bright and distinctive blue script along the side of the bus.

Sister Tharpe and her backing singers, the Rosettes, welcomed your reporter into the bus’ interior. Inside, there are dedicated areas for dressing, eating, and sleeping. The Rosettes eagerly pointed out their dedicated sections of the bus, each featuring a closet and dressing area — no one has to share! Sister Tharpe noted that the line of mirrors running along one side of the bus, to be used for hair and makeup, was inspired by the mirrors installed in the luxurious Richmond, Va. home she shares with her singing partner, “Golden Voice Favorite” Madame Marie Knight, a young singer who was discovered by Sister Tharpe, as well as her mother, Katie Bell Nubin, a noted evangelist from the Church of God In Christ, who got her start at Pastor Robert’s Chicago church.

The atmosphere inside the bus is charming and convivial. But its main purpose is an essential one: It assures that the ladies always have a comfortable and discreet place to prepare for their performances; they artists are able to dine in the bus, allowing them to carry-out food and not waste any time on the road. And the sleeping quarters conveniently allow the ensemble the ability to rest while traveling between concert appearances, especially in parts of the country where no suitable accommodation may be available.

When the troupe arrives at their destination they are met by large, sold out crowds. At a recent concert in Macon, Ga., Abner Jay, a disc jockey on local station WMAZ described the scene: “5,000 tickets were sold, that was the seating capacity. It’s estimated that they turned down 6,000. I had never seen nothing like it or heard nothing like it. Downtown near the auditorium the whole streets were full of people, no cars. People — standing room only — trying to get to the auditorium two and three blocks away. I never seen nothing like it, nowhere.”

While the information above is correct and documented in interviews with people who were there (like the Jordanaires’ Gordon Stoker, who toured with Rosetta Tharpe in the time period she had her bus) published in the late ’40s and early ’50s, this article itself is pure invention — nothing quite like it exists in any historical newspaper archive. It’s hard to comprehend that a successful singer with a truly national profile would be driving through American cities and along highways in a personalized tour bus of her own design — likely the first documented instance of what would become a music business necessity as well as a highly sought-after status symbol for musicians in every genre — without dozens of breathless articles capturing every fabulous detail of the musicians’ surroundings, down to the quality of the finishes. The on-the-bus-with-the-musicians trope would become almost standard in artist profiles 20 years later.

Part of Turning The Tables is reflecting back on the originators, the women who defined the sound of popular music, who didn’t get sufficient credit when they were working and, in many cases — Rosetta Tharpe being high on that list — have not received anywhere near enough credit from researchers, scholars and archivists. She only made it into the Rock & Roll Hall of Fame in 2018, decades after many musicians who were directly influenced by her were inducted into their rolls.

But let’s imagine a world in which the opposite was true, and she was given her propers.