In the Kihnu Museum on a tiny Estonian island, the elders, dressed in matching striped skirts, pondered a favorite question over coffee. What hasn’t a Kihnu woman done? They kept a running list of all of the necessary jobs they remember Kihnu women doing in the absence of men, from fixing tractor engines to performing church services when the Russian Orthodox priest wasn’t available. So far, there has been only one job no one can claim.

“Digging a grave,” Maie Aav, the museum director, said, “but even that is questionable.” Like the elders, Ms. Aav, who is in her mid-40s, was also wearing a traditional skirt (called a kort), but hers had a slight color variation to represent her younger age. 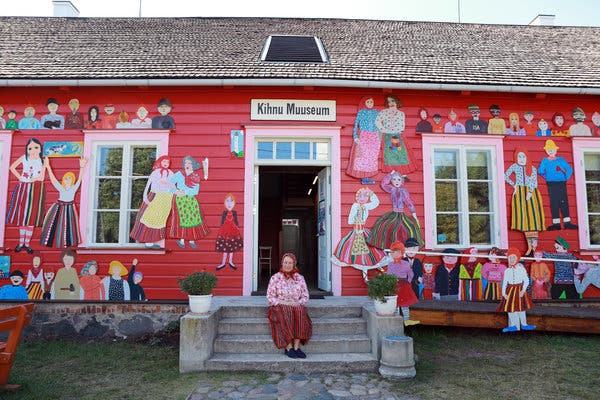 Maie Aav, the director of the Kihnu Museum, sits in front of the brightly adorned building.Credit Birgit Puve for The New York Times

Visitors to this peaceful isle in the Baltic Sea are struck by its windswept beaches surrounding pristine forests and the occasional brightly colored farmhouse. At nearly seven square miles, Kihnu is the seventh largest of Estonia’s more than 2,000 islands.

Many Estonian islands have remained unspoiled and untouched since they were last inhabited centuries ago. In contrast, Kihnu stands out precisely because of its inhabitants. The island is known for its abundance of women.

Men began to fade from everyday life on Kihnu in the 19th century, thanks to their jobs at sea. Fishing and hunting seals took them away from home for months at a time. In response, Kihnu women stepped in and ran the island. Otherwise traditional female roles expanded to include anything their society needed to thrive and function. Eventually, this became ingrained in Kihnu heritage, as Unesco noted when it inscribed aspects of the culture on its Representative List of the Intangible Cultural Heritage of Humanity in 2008.

But tiny, traditional Kihnu has a growing modern problem. The population is shrinking as islanders move away because of a lack of jobs.

On top of that, changes in the fishing industry are bringing a new stress: the men are coming home for longer periods of time. Some have even stayed.

“We will have to commercialize eventually, but the question is which way is best for us,” said Mare Matas, the president of the Kihnu Cultural Space Foundation, which is dedicated to promoting and protecting the islanders’ history and traditions through events, festivals and educational initiatives.