Ginger Baker, who helped redefine the role of the drums in rock and became a superstar in the process, died on Sunday in a hospital in southeastern England. He was 80.

Mr. Baker drew worldwide attention for his approach to the drums, as sophisticated as it was forceful, when he teamed with the guitarist Eric Clapton and the bassist Jack Bruce in the hugely successful British band Cream in 1966.

Keith Moon of the Who was more uninhibited; John Bonham of Led Zeppelin — a band formed in 1968, the year Cream broke up — was slicker. But Mr. Baker brought a new level of artistry to his instrument, and he was the first rock drummer to be prominently featured as a soloist and to become a star in his own right. Mr. Clapton praised him as “a fully formed musician” whose “musical capabilities are the full spectrum.”

Both as a member of the ensemble and as a soloist, Mr. Baker captivated audiences and earned the respect of his fellow percussionists with playing that was, as Neil Peart, the drummer with the band Rush, once said, “extrovert, primal and inventive.” Mr. Baker, Mr. Peart added, “set the bar for what rock drumming could be.”

But Mr. Baker, who got his start in jazz combos and cited the likes of Max Roach and Elvin Jones as influences, bristled when the word “rock” was applied to his playing. “I’m a jazz drummer,” he told the British newspaper The Telegraph in 2013. “You have to swing. There are hardly any rock drummers I know who can do that.”

Mr. Baker’s appearance behind the drum kit — flaming red hair, flailing arms, eyes bulging with enthusiasm or shut tight in concentration — made an indelible impression. So, unfortunately, did his well-publicized drug problems and his volatile personality.

Mr. Baker, who by his own count quit heroin 29 times, was candid about his drug and alcohol abuse in his autobiography, “Hellraiser,”published in Britain in 2009.

He recalled driving from Los Angeles to San Francisco while on tour with the band Blind Faith in 1969 and being more amused than surprised when he heard a report on the radio that he had died from a heroin overdose. 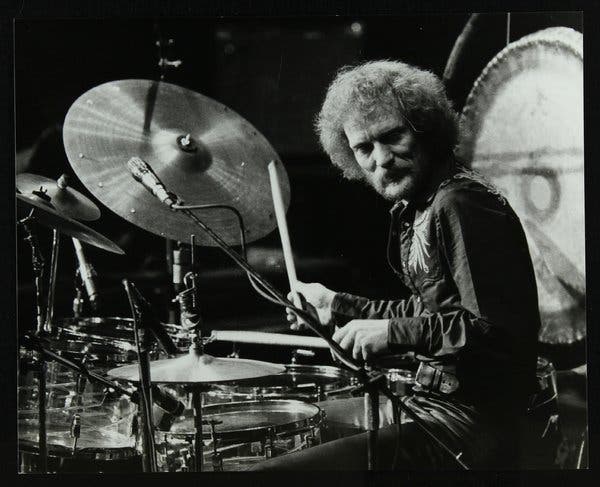 Of a later tour, he wrote, “In 1983-84, I formed the Ginger Baker Trio with guitarist John Simms and bassist Ian Macdonald and we did a tour that included Malta, Spain and Germany; but I can’t remember anything about it due to the fact that I was drinking so heavily.”

He was also, by all accounts, not a very likable man. Journalists who interviewed him tended to find him uncooperative at best, confrontational at worst. The hostility between Mr. Baker and Mr. Bruce, which sometimes led to onstage altercations, was the stuff of rock legend. The 2012 documentary “Beware of Mr. Baker” — the title is taken from a sign outside the house in South Africa where he was living at the time — begins with footage of Mr. Baker physically attacking the film’s director, Jay Bulger.

“If they’ve got a problem with me, come and see me and punch me on the nose,”Mr. Baker says in that film. “I ain’t going to sue you; I’m going to hit you back.”

But if he was difficult to deal with, his talent was impossible to ignore. As A. O. Scott of The New York Times noted in his review of “Beware of Mr. Baker,” Mr. Baker’s music was ultimately “the only reason anyone should take an interest in him.”

Peter Edward Baker — he became known as Ginger during childhood because of his red hair — was born on Aug. 19, 1939, in the Lewisham area of southeast London, to Frederick and Ruby (Bayldon) Baker. His father, a bricklayer, was killed in action during World War II.

Drawn to the drums at an early age, Mr. Baker talked his way into a job with a traditional-jazz combo when he was 16 despite his lack of professional experience. Before long, he was well established on the London jazz scene. He also had a heroin habit that would dog him for decades.