LOS ANGELES — Lina Wertmüller made history when she became the first woman to earn a best-director Oscar nomination for her 1975 film “Seven Beauties.” On Sunday night, when the 91-year-old Italian director took the stage at the Governors Awards to receive an honorary Oscar, she suggested another shake-up.

Wertmüller, clad in her usual white-framed eyeglasses, grinned impishly. She then encouraged the women in the ballroom to begin chanting, “We want Anna, a female oscar.

The name change may not stick, but for an academy that continues to wrestle with issues of diversity and representation, Sunday night’s Governors Awards were as diverse and forward-thinking as the organization itself hopes to become. Ten years ago, when these honorary Academy Awards were spun out of the Oscar telecast and given their own big night, it was not uncommon for most or all of the awards in the show to go to white men.

At this year’s edition, only one of the four awards went to a white man, and the recipient, the iconoclastic director David Lynch, spent the least time onstage. After offering brief thanks to the academy and friends in the industry, including his “Blue Velvet” stars and presenters Laura Dern and Kyle MacLachlan, Lynch glanced at his new Oscar and said simply, “You have a very nice face. Good night.” 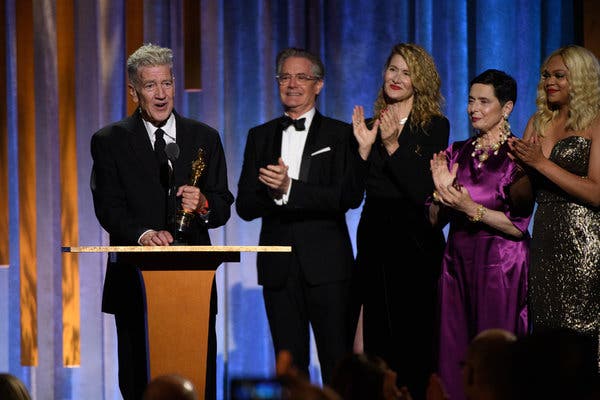 For most of the ceremony, presenters and winners were consumed with discussing industry inequality and how to combat it. While introducing Wertmüller, the director Jane Campion noted that as a best-director nominee for “The Piano” (1993), she had been asked to talk about the history of women in that category. “It’s a very short history,” she deadpanned. “More of a haiku.”

And when the “Last of the Mohicans” and “Dances With Wolves” actor Wes Studi accepted his Oscar, he raised it above his head in triumph. “I’m proud to be here tonight as the first Indigenous Native American to receive an Academy Award,” Studi said. “It’s about time!”