There are notes and letters from other icons of the 1960s. Cards from John and Yoko. A letter from Allen Ginsberg, the poet, offering to help him raise defense money. A plea by Norman Mailer to the governor of New York, seeking executive leniency on his behalf.

The papers of Abbie Hoffman, the puckish activist who gained a national reputation as a radical hippie, make clear the extent to which the tumult of that era regularly swirled around him: the showering of the New York Stock Exchange with dollar bills, the nomination of a pig as a presidential candidate, the turbulent demonstrations that rattled the 1968 Democratic National Convention in Chicago.

Now the trove of letters, manuscripts, photographs, F.B.I. surveillance reports, Christmas cards and thousands of other papers that memorialize Mr. Hoffman and his contentious role in American history have been sold to the University of Texas at Austin by Johanna Hoffman Lawrenson, his third wife and companion for the last 15 years of his life.

They will be housed at the university’s Dolph Briscoe Center for American History where some of the items are to go on display Tuesday after a ceremony to mark the acquisition. Later, after much sorting and cataloging, the rest of the collection will become available to scholars and students.

“Abbie Hoffman has not gotten his proper due historically,” Don Carleton, executive director of the Briscoe Center, said. “He really was a pathbreaking guy in terms of the street theater approach to gain attention for the causes he advocated, particularly the anti-Vietnam War movement.”

Mr. Hoffman, whose infamously anarchic work, “Steal This Book,”included tips on how to shoplift, might be amused to have his papers end up in so solemn a setting as a university research library. He was arguably the most emblematic figure of the youthful protest movements of the 1960s and 1970s, a man who helped coin the term “Yippie” and co-founded the group that took that name. But he was always more of a comic provocateur than an ideologue, specializing in thumbing his nose at institutions and formalities in zany ways. 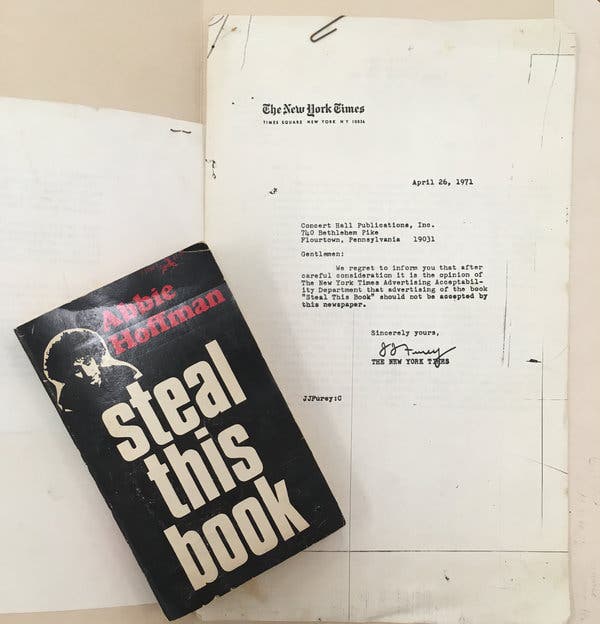 In 1970, for example, when he and the other so-called Chicago Seven were being tried on charges of conspiring to disrupt the 1968 convention, he taunted the judge, Julius C. Hoffman, for having the same last name by calling him his “illegitimate father.”

The Briscoe Center, which has major collections of papers from figures in the civil rights and antiwar movements, paid Mr. Hoffman’s widow $300,000 for the collection. The payment was covered by a donor’s gift.

In an interview, Ms. Lawrenson, a photographer and former fashion model, said she had been living in a one-room Manhattan apartment with 75 boxes of Mr. Hoffman’s papers for 30 years, and felt it was time to give them a useful home.

“I’m hoping the archive will help keep his spirit and his radical legacy alive and serve as a great resource for scholars studying 20th-century activism and organizing,” she said. “Abbie dedicated his life to social change, to creating a more egalitarian, compassionate world.”