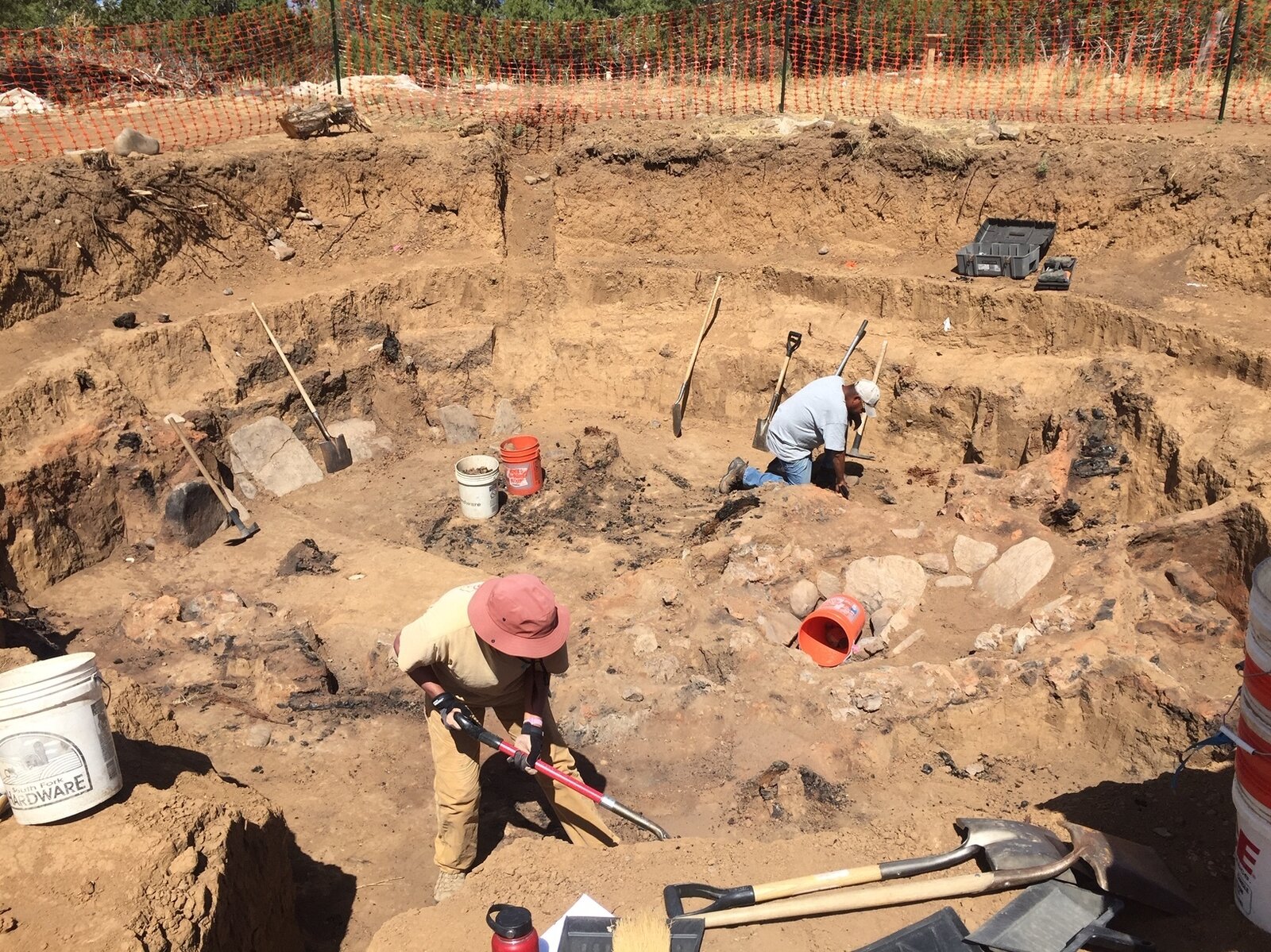 Archaeologists excavate one of the Ancestral Puebloan pit houses in the path of the planned highway in southern Colorado.

Just outside Durango, Colo., archeologist Rand Greubel stands on a mesa surrounded by juniper trees. He points to a circular hole in the ground, about 30 feet across and more than 8 feet deep. There’s a fire pit in the center of an earthen floor, ventilation shafts tunneled into the side walls and bits of burned thatching that suggest how the structure once continued to rise above the ground. It’s a large pit house from what’s known as the Pueblo I period.

“We knew right away that it was highly significant just because of the sheer size of it,” Greubel says.

It’s amazingly well preserved. Greubel thinks this particular pit house was probably a center for ceremonies or gatherings for the Ancestral Puebloan people who lived here roughly 1,200 years ago. That was before they are believed to have migrated west to the Mesa Verdearea and then south to become the ancestors of the Hopi, Zuni and various Pueblo tribes.

“When we were working down here, you kind of have a sense of peace and you feel like you’re accomplishing something good,” Greubel says. “I know not all people think that way, but we treated the site with respect and a sense of awe.”

Greubel is with Alpine Archaeological Consultants, which the Colorado Department of Transportation hired to work on the dig. His company, based in Montrose, Colo., will do subsequent analysis of the artifacts after the excavation is complete.

It is awe inspiring, standing inside this space that has held human history for so long. But its existence will be short-lived. This pit house is about to be filled in and covered up by a highway, as are six other important ancient sites on this mesa.

The path of “progress”

Dan Jepson, an archaeologist with the Colorado Department of Transportation, says all of these cultural resources were discovered as a result of the highway project itself. Under federal law, potential sites for things like road expansions must be surveyed and then sometimes excavated to see what important historical features might lie below the ground. And that’s how these pit houses were found.

Over the last two decades, Jepson says, the department has explored scores of other possible routes for the road to avoid destroying cultural artifacts. But because southwest Colorado is so full of Native American history, every option would have hit potential archaeological sites.

This is all about balance between the ethics that I have as an archaeologist in the context of working for an agency that destroys things in the name of progress.

When it comes to laying down the new road, Jepson says the agency doesn’t have a choice. The state is rerouting a steep, narrow 1 1/2-mile stretch of highway that it says was too dangerous for the increasing volume of traffic in the area.

“This is all about balance between the ethics that I have as an archaeologist in the context of working for an agency that destroys things in the name of progress,” Jepson says.

His agency reached out to dozens of tribes in the region to offer them a chance to participate in the project and give feedback. The Southern Ute tribe agreed to consult with the agency. The new construction site will cross the outer boundaries of the tribe’s reservation.

But some Southern Ute citizens are still upset that the digs are happening at all, and they don’t feel empowered to stop them.

Just down the road, crews are using pickaxes, shovels and brushes to finish excavating the last of the seven sites. Trucks barreling up the hill behind them are a reminder of the regular heavy road traffic that already passes through this area.

Sam Maez, a member of the Southern Ute tribe, is here too. The Transportation Department invited him to talk with the archaeologists about their work and the highway project as a whole. The tribe isn’t fighting the construction legally. But Maez isn’t afraid to speak his mind.

You know, those are my family’s bones in there.

“You know, after generations and generations of basically exterminating us and getting rid of everything that we believe in, and here we are picking the scabs of Mother Earth, you know, and wondering what, why and who these people were,” Maez says. “Well, they’re us.”

He alludes to the human remains that the archaeologists found while excavating several of the sites under the proposed highway path.

“You know, those are my family’s bones in there,” Maez says. “We don’t have a ceremony to dig them up and put them somewhere else.”

He says projects like this have forced tribes to adapt to that process and create new rituals to remove and rebury remains.

Even though local tribes didn’t have ultimate veto power to stop this highway project from moving forward, Maez says he does see a silver lining.

“It’s quite interesting to see how we lived, you know, and to compare in how we live today. But on the other hand, it’s very hurtful and sad too.”

Artifacts from these excavations will be analyzed in a local lab and then eventually moved to the Canyons of the Ancients museum in Dolores, Colo. Construction on the highway itself is set to begin in the spring.

This story was produced by the Mountain West News Bureau, a collaboration among Wyoming Public Media, Boise State Public Radio in Idaho, KUER in Utah, KUNR in Nevada and KRCC and KUNC in Colorado.