In a win for protesters, government agrees for vote to be held in April 2020 on replacing the Pinochet-era constitution.

Chile has said it will stage a referendum to replace the country’s dictatorship-era constitution next year, conceding to a key demand of protesters after nearly a month of violent civil unrest.

The current charter, in force since 1980 and enacted by the military government of Augusto Pinochet, has been amended numerous times in the years since.

However, it does not establish the state’s responsibility to provide education and healthcare, two demands made by the millions of Chileans who have taken to the streets.

Legislators in Chile’s National Congress agreed on Friday to hold the plebiscite in April 2020 after hours of negotiations between the governing coalition and opposition parties.

“This agreement is a first step, but it is a historic and fundamental first step to start building our new social pact, and in this, the citizenry will have a leading role,” said Interior Minister Gonzalo Blumel.

The referendum will ask voters whether the constitution should be replaced and if so, how a new charter should be drafted, Senate President Jaime Quintana said.

It will propose three different models for a body to devise a new constitution, made up of either fully elected representatives, political appointees or an equal mix of both.

If elections to the body are needed, they will be held in October 2020 to coincide with regional and municipal ballots.

“We are happy to have been able to participate in an agreement that defeats violence,” said Jacqueline van Rysselberghe, leader of the right-wing Independent Democratic Union, the largest party in President Sebastian Pinera’s governing coalition.

The announcement came as thousands took to the streets on Thursday to mark a year since Camilo Catrillanca, a young indigenous man, was shot dead by police in Ercilla, a town south of Santiago.

The unrest that began on October 18 with protests against a rise in rush-hour metro fares has mushroomed into a broader outcry against the status quo, with burning, looting and daily confrontations between demonstrators and police.

Al Jazeera’s Lucia Newman, reporting from the capital Santiago on Thursday, said there were further clashes between protesters and riot police who were using pepper spray and water cannon as demonstrators threw Molotov cocktails. 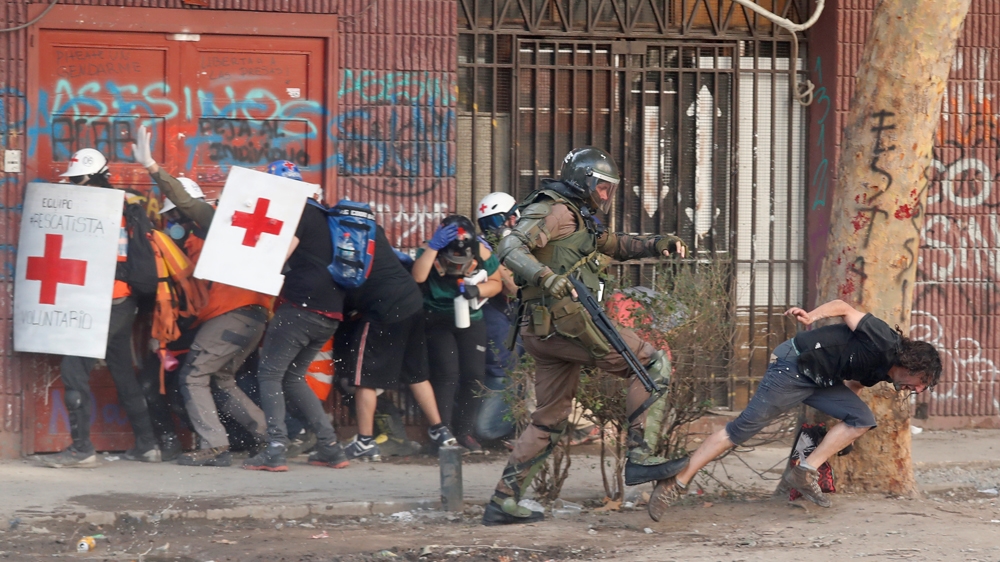 The crisis is Chile’s biggest since its return to democracy in 1990, leaving 20 dead – five at the hands of state forces – and more than 1,000 injured.

Security forces have been accused of torturing protesters, with a public prosecutor announcing his intent to investigate 14 police officers over abuse claims.

Protesters cite low wages, high costs for education and healthcare and a yawning gap between rich and poor in a country dominated politically and economically by a few elite families.

Demonstrators have demanded greater social reform from the government led by Pinera, who has announced several measures in a bid to appease the public mood.

After weeks of sometimes violent demonstrations, most polls show the protest movement is supported by 75 percent of Chileans.

A slightly larger number – 87 percent, according to a survey by pollster Cadem published this month – say they favour the protesters’ demand for constitutional reforms.

A few days after Pinera became president last year, his government announced it would not allow the consideration of a bill to amend the constitution that his socialist predecessor Michelle Bachelet had submitted to Congress.