SANTIAGO, Chile — The brutality of the Chilean police’s response to the country’s unrest is leading to sweeping calls for the force’s reform.

The protests, which started two months ago over an increase in subway fares and quickly morphed into a broader reckoning over inequality, included peaceful gatherings and violent confrontations with the police that resulted in thousands of instances of abuse, according to the National Institute for Human Rights, an autonomous state agency.

Almost 400 of the incidents documented by the National Institute for Human Rights are of torture and cruel treatment. Another 194 involve sexual violence, including four rapes. More than 800 involve excessive use of force by the police. The Institute has labeled at least six killings by security forces as homicides.

These documented instances of human rights violations have brought new scrutiny to the Carabineros, Chile’s national police force, which was never purged or significantly reformed after the dictatorship headed by Gen. Augusto Pinochet ended in 1990. The Carabineros were deeply involved in human rights violations that left over 3,000 dead and disappeared and 38,000 tortured during Pinochet’s rule.

“We never thought we would have to come back to Chile under these circumstances to record massive human rights violations,” said José Miguel Vivanco, the Americas’ director of Human Rights Watch, when the organization presented its report on Chile last month. “We thought this was history.”

The Carabineros declined a request for an interview, but this week its director, Gen. Mario Rozas, said there were 856 internal investigations related to the reports underway. He also announced structural and policy changes to the institution.

President Sebastián Piñera said accusations will be investigated, and welcomed into the country four human rights organizations, including the Organization of American States and the United Nations, which found “a high number of serious human rights violations.”

The government has also created a task force, led by Gonzalo Blumel, the interior minister, to propose reforms for the police force, and the police suspended the use of pellets.

But human rights groups say that the Carabineros are still firing tear gas cartridges at demonstrators’ bodies and heads, in breach of their own protocol. On December 10, International Human Rights Day, 8 people were injured this way — two of them, including a 15-year-old girl, are in critical condition.

Human rights groups and analysts say they want the government to increase its oversight of the Carabineros’s budget, operations and training and of their appointment and removal of officers, effectively bringing the police under civilian control.

Opposition legislators say the president bears responsibility for the actions of forces under his watch, and launched a process similar to impeachment proceedings against him and his former interior minister, Andrés Chadwick, who stepped down weeks after the protests began.

The case against President Piñera was dismissed on Thursday. But on Wednesday, the Senate approved the accusations against Mr. Chadwick, holding him responsible for failing to take steps to avoid human rights violations and “not maintaining public order in a rational manner.” He was barred from holding any public office for five years.

Since the protests began, hundreds of demonstrators have suffered eye injuries at the hands of the police, caused by the indiscriminate use of riot guns, often aimed directly at demonstrators’ heads. Two victims were blinded. More than 12,700 people have been woundedacross the country, according to hospital records.

The Public Prosecutor’s Office opened more than 2,670 criminal investigations based on reports of torture, sexual violence and injuries from firearms. The vast majority involve Carabineros personnel. 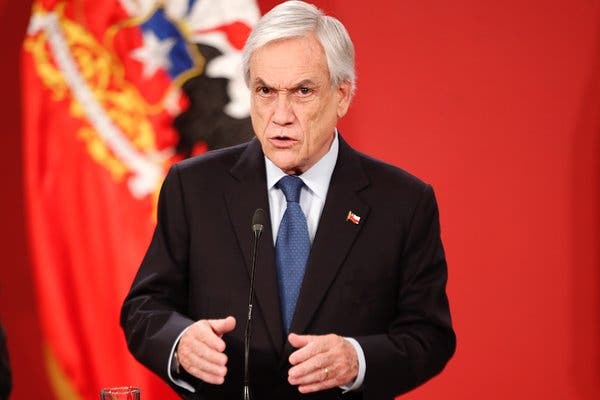 When Chileans took to the streets in mid-October, the Carabineros were already facing a profound crisis, and were ill-prepared to be on the front lines of a sustained period of unrest.