Artistic expression is not only central to the protests in Chile—it’s part of a long national tradition of resistance. 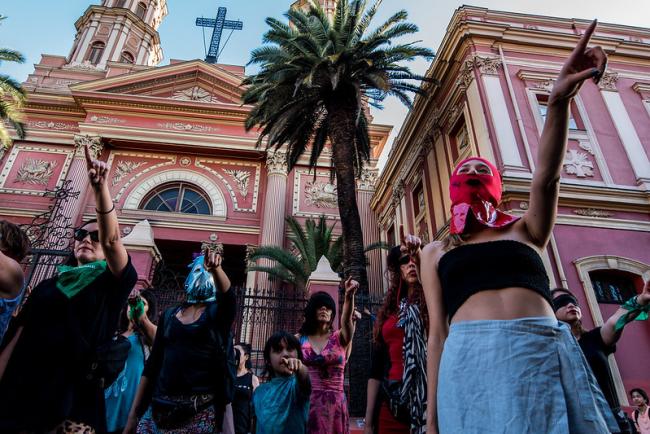 Women perform “A rapist in your path” in Santiago, Chile, on Dec. 1, 2019. The performance has gone viral in Chile and beyond. (Photo by Paulo Slachevsky/Flickr)

This December, we are asking readers to make a tax-deductible contribution before the year is over to ensure NACLA continues to provide only the best in progressive news and analysis on Latin America. Visit nacla.org/donate

Released on October 20, only days after the initial protests against a fare hike in Santiago paralyzed public transportation, Chilean hip hop artist Ana Tijoux’s song “Cacerolazo” stands among a growing number of instances of art as a means of resistance that has surfaced across Chile. Examples of these manifestations range from music and performance to murals, installations, comics, street and body art, and graffiti, all overlapping within the appropriation of public space. These have been deployed as a counterweight to the alarming human rights violations by security forces since the beginning of the unrest. They serve to illustrate the civility with which a great majority has come out against the neoliberal, patriarchal system codified in Chile’s Pinochet-era constitution.

Far from being a new development, relying on art to denounce social and political ills remains a Chilean tradition. In the 1970s, Víctor Jara and siblings Isabel and Ángel Parra, among others who espoused social change, inaugurated the New Song movement. Violeta Parra was one of its precursors. The production of quilt squares known as arpilleras with a political message spiked after the fall of Allende. “The People, United, Will Never be Defeated,” a song interpreted these days by choirs, symphony orchestras, trovadores, and protesters alike, was composed and recorded in 1973 by the renowned folk music group Quilapayún. Another example, introduced for the first time in 1978, is “La Cueca Sola,” a variation of the Chilean national dance in which a woman dances by herself because her partner is one of the disappeared. Formed in 1979, the influential rock band Los Prisioneros composed “El baile de los que sobran,” or The Expendables’ Dance, tackling the second-rate education commonly imparted to children of marginalized communities. Today and Not Tomorrow, a new documentary on the Mujeres por la Vida collective directed by Josefina Morandé, depicts artistic imagination as one of the tools in the struggle to overthrow the military junta in the 1980s.

This type of art doesn’t beat around the bush. Rather, it directly but imaginatively addresses the roots of the discontent. Tijoux’s song places the cacerolazo, a form of resistance practiced in the 1970s that continues to echo across Latin America, at the center of the narrative. With pots and pans, lids, and other kitchen utensils—instruments at the disposal of even the most dispossessed—residents rise in concert at a previously announced time of the day. Through noise and solidarity in the streets or out of apartment buildings, the banging of the pots, Tijoux suggests—in addition to raising our fists—is enough to stand up to the injustice. It is indeed an eerie feeling to hear a concerted, loud banging rising from the shadows, especially under a curfew. The rage seems to come from everywhere at once, making it impossible to contain. 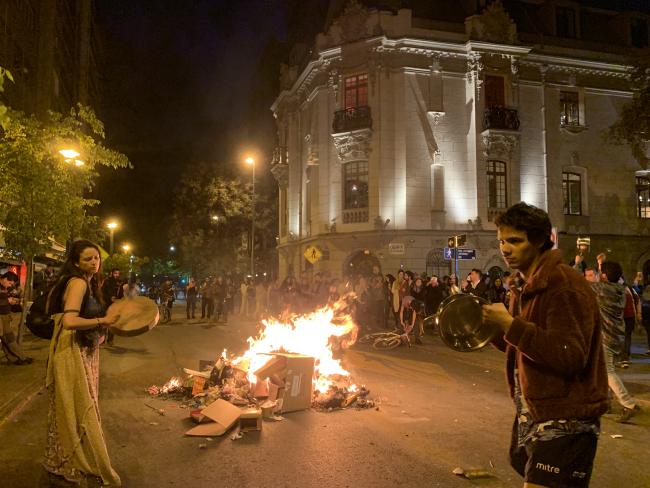 October 18, in Lastarria, on the first day of street protests. (Photo courtesy of Iraida Lopez)

In its longer version, Tijoux’s song lists some of the grievances shared by most Chileans, such as the privatized and diminished pension system, dwindling funds for education and health care, an inadequate minimum wage, and the gap between rich and poor, which has made Chile one of the most unequal countries in the industrialized world. The song also names Mapuche activist Camilo Catrillanca, who was fatally shot in 2018 by Carabineros police, and environmental defender Macarena Valdés, whose 2016 death was deemed a suicide despite suspicious circumstances. Demands for investigations into the circumstances surrounding these deaths have formed part of the longer battle recent protests represent. As security forces violently repressed the mobilization, calls for justice have expanded. As Tijoux maintains, echoing the communal sentiment, it is not the 30 peso hike in the metro fare, but the 30-plus years since the neoliberal constitution was implemented that fuels the uprising. Anger has been building up in the face of negligence, exclusion, unaccountability, racism, and a severely eroded social safety net. Among the many losses is fear itself.

Women have played a strong role in these actions. On November 1, hundreds of women dressed in black and carrying a white flower marched in silence in Santiago as if they were mourning not only the deaths resulting from police repression, but also the happiness that the transition to democracy was supposed to secure. A banner near Plaza Italia, now unofficially renamed Plaza Dignidad, where demonstrators have congregated for weeks, read: “Happiness never arrived, dictator Piñera. We’re going to say No.” It was a reference to the successful 1988 “No” campaign waged by the organized opposition—whose slogan was “Happiness is Coming”—against an extension of the Pinochet regime.

In another prominent act of women’s resistance, Chilean singer Mon Laferte bared her breasts as she walked down the red carpet at the most recent Latin Grammy Awards. She had “In Chile they torture, they rape, they kill” written with a black marker on her skin. Other expressions at the intersection of politics and gender are similarly powerful. On November 25, the International Day for the Elimination of Violence Against Women, the Las Tesis feminist collective, founded by four women from Valparaíso, put on a public performance in front of La Moneda presidential palace and other relevant sites around Santiago. In the performance, “A Rapist in Your Path”, a group of women move synchronically with their eyes covered with a black cloth, chanting in unison: “And it was not my fault, or where I was, or how I dressed,” exonerating women from the despicable charge of provoking their own rape. Going viral, it was later staged in various cities throughout Chile and around Latin America and the world, including in Mexico, Colombia, and Spain.