While the House of Representatives impeached President Trump on Wednesday, the president held a campaign rally in Battle Creek, Mich., where he suggested future presidents could, like him, get impeached simply for making phone calls.

“The rally was billed as a ‘Merry Christmas’ rally,” Seth Meyers reported Thursday night. “And in the spirit of this season, Trump went through a list of grievances and insults so long, CNN actually had to tally up a list of everyone and everything he attacked.”

“Trump also lashed out viciously at Representative Debbie Dingell from Michigan. Debbie Dingell is the widow of a World War II veteran, longtime congressman John Dingell, who’s very popular. He died in February. Trump last night at the rally made a ‘joke’ suggesting that congressman Dingell went to hell because his wife voted for impeachment. Trump believes that since he graciously allowed the flags at federal buildings to be lowered to half-mast to honor John Dingell, his widow should have shown her appreciation by voting not to impeach. In other words, another quid pro quo is what he was looking for.” — JIMMY KIMMEL

“He really doesn’t seem to know what he did. Maybe that’s why he’s so angry.” — JIMMY KIMMEL

“Aw, poor Trump, man. He just became the third president in history to get impeached and you see what’s happening: He’s trying to convince everyone that it doesn’t bother him. You know? He’s just like, ‘It doesn’t even feel like we got impeached.’ Like, yeah, no, not ‘we’ — you got impeached. There’s no ‘we.’” TREVOR NOAH

“Yeah, we’re not — you are. In terms of getting impeached, the rest of us did great yesterday.” — SETH MEYERS

“This morning, he woke up on the floor next to his tanning bed and tweeted the words ‘I got impeached last might.’ And our long national mightmare continues.” — JIMMY KIMMEL

“The president is so desperate for approval right now. This morning, he replied to a tweet that called him ‘the best president ever,’ even though this tweet was posted in September of last year. Somehow he found it 14 months later. I don’t know if he searched the words ‘best president ever’ and that’s what came up, or maybe he has a backlog for those kinds of stuff. But it’s like digging up old love letters and going, ‘Wow, this chick’s got the hots for me!’” — JIMMY KIMMEL

The Bits Worth Watching

Just in time for the holidays, “The Late Show” offered a new animated Christmas classic called “Once Upon Impeachment.”

With the holidays upon us, #LSSC is proud to present this brand new animated Christmas classic! #OnceUponImpeachment 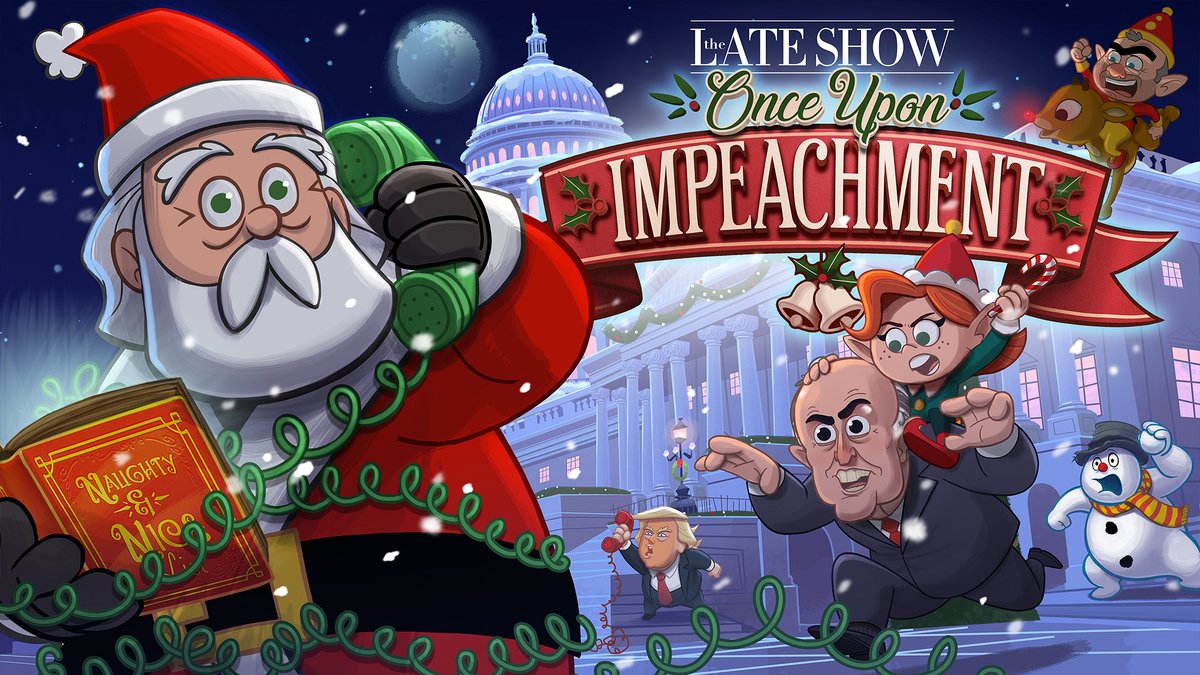