The death of Ram Dass, who was born Richard Alpert, was announced on his official Instagram account.

Having returned from India as a bushy-bearded, barefoot, white-robed guru, Ram Dass became a peripatetic lecturer on New Age possibilities and a popular author of more than a dozen inspirational books.

The first of his books, “Be Here Now” (1971), sold more than two million copies, and established him as an exuberant exponent of finding salvation through helping others.

He started a foundation to combat blindness in India and Nepal, supported reforestation in Latin America, and developed health education programs for American Indians in South Dakota.

He was particularly interested in the dying. He started a foundation to help people use death as a journey of spiritual awakening and spoke of establishing a self-help line, “Dial-a-Death,” for this purpose.

When Mr. Leary was dying in 1996 — and wishing to do it “actively and creatively,” as he put it — he called for Ram Dass. Over the years, Ram Dass had alternately been Mr. Leary’s disciple, enemy and, at the end, friend. In a film clip of the two men preparing for Mr. Leary’s death, Ram Dass turns to Leary, hugs him and says, “It’s been a hell of a dance, hasn’t it?” 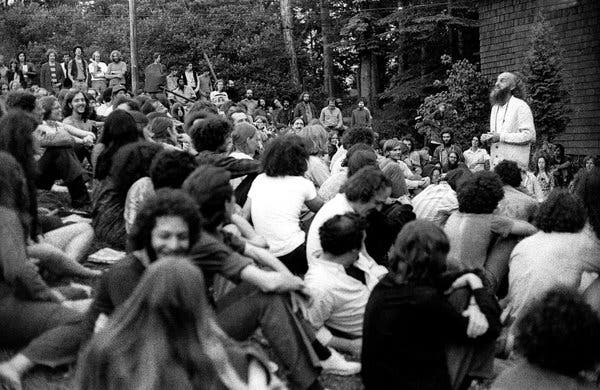 A year later, Ram Dass suffered a cerebral hemorrhage that left him partly paralyzed, unable to speak and needing a wheelchair. From his home in Maui, Hawaii, he learned to “surf the silence” at first, he said, but over time and painstakingly he reacquired a halting form of speech and was able to lecture on the internet and make tapes.

Richard Alpert was born in Boston on April 6, 1931. His father, George, a lawyer, was a founder of Brandeis University and president of the New Haven Railroad. Richard had a bar mitzvah, but said he had no religious convictions as a youth.

A “spit and polish” son of a corporate executive, as he described himself, he graduated from Tufts University as a psychology major in 1952 and studied for a master’s degree in the subject at Wesleyan, only to flunk the oral exam.

Nevertheless, Mr. Alpert, as he was known then, was accepted as a Ph.D. candidate at Stanford and earned his doctorate, staying on afterward to teach. That was followed by twin appointments, in psychology and education, at Harvard.

He was soon riding high, with an apartment full of exquisite antiques, a Mercedes sedan, an MG spots car, a Triumph motorcycle and his own Cessna airplane.

It was at Harvard where he crossed paths with Mr. Leary, who was lecturing there in clinical psychology. They became drinking buddies. Mr. Alpert admired Mr. Leary’s iconoclasm, telling Tufts University Magazine in 2006 that Mr. Leary was “the only person on the faculty who wasn’t impressed with Harvard.”

Mr. Leary, while working at the University of California, Berkeley, had done research on psilocybin, the main psychoactive ingredient in some species of mushrooms, and he continued the work at Harvard. Psychiatrists were interested in mind-altering drugs as clinical aids because they mimicked schizophrenia, but Mr. Leary wanted to see if they could be beneficial.

He invited some friends — including Mr. Alpert and the poet Allen Ginsberg — to his house in Newton, Mass., on Saturday, March 5, 1961. In his kitchen, he distributed 10-milligram doses of psilocybin.

After taking his, Mr. Alpert recalled, he felt supreme calm, then panic, then exaltation. He believed he had met his own soul. “It was O.K. to be me,” he said he had realized.

The spiritual leader and author Ram Dass has died at the age of 88. He was an icon of the psychedelic drug movement of the ’60s and ’70s, as well as a champion of a mindful philosophy.

Ram Dass was born Richard Alpert to a Jewish family in Boston. His landmark 1971 book, Be Here Now, opens with his origin story: He was a successful, if anxious, professor in Harvard’s psychology department. Feeling a certain malaise about his middle-class existence, he began experimenting with psychedelic drugs with his colleague Timothy Leary.

“A deep calm pervaded my being,” Ram Dass wrote. “Then I saw a figure standing about 8 feet away, where a moment before there had been none. I peered into the semi-darkness and recognized none other than myself, in cap and gown and hood, as a professor. It was as if that part of me, which was Harvard professor, had separated or disassociated itself from me.”

He and Leary started studying LSD and its effects — research that garnered them a reputation and a large following. It also led to them getting fired.

This story was originally published in the April 22nd, 1976, issue of “Rolling Stone.”

YOU’D THINK THAT BABA Ram Dass, who had been a Harvard psychology professor and psychedelic drug researcher in his former incarnation as Dr. Richard Alpert, Ph.D., would know all about mind games by now. And yet the toothache had felt real enough, building until the nerve seemed a snaking electric wire, making it all but impossible for him to fix his attention on the tip of his nose and watch his breath go in and out, in and out, in and out, which was pretty much all he was supposed to do from four in the morning until ten at night during the meditation retreat. On the instructor’s advice he tried thinking the pain away, mentally swishing it around his jaw and out his mouth like a swill of water, and when that didn’t work he tried ignoring it. The trouble was that every time Ram Dass began to sink back into the nose yoga he’d get another high-voltage jolt in the jaw and instantly the same home movies would start up again on the back of his eyelids.

They were all related to teeth in one way or another. He’d see a picture of himself, grinning, a gaping hole where the sore front tooth had been, and then find himself ruminating on the social implications of a missing tooth, how odd, and in a way appealing, it would be for a rich kid like himself to have one. Or he’d see his guru, Maharaji, a nearly toothless old man sitting in a blanket in a temple in the foothills of the Himalayas, and wonder if the missing tooth would make the two of them look more alike. Once he recalled his last visit to his mother just before she died of a spleen condition in 1966. Although barely a stick figure in a hospital bed by then, she insisted on holding a small Japanese fan in front of her face to hide the fact that her gums were too sore to support her bridgework. Another time the pain summoned up his brother, who had spent years in one mental hospital or another claiming to be Jesus Christ. The last time Ram Dass saw him he had a new fantasy: He was the King of the Jews, and his vast riches were locked in a Vatican vault.

His brother claimed that the proof of his legitimacy could be found in one of his wisdom teeth.

Strange what you could come up with when all you had to do was clear your mind and concentrate on the tip of your nose. By the time he left the retreat in Guerneville, California, and headed south to Berkeley, Ram Dass had made up his mind not to replace the tooth after it had been extracted. He called ahead to the house he had been sharing with a group of young friends for the past few months and asked one of them to make an emergency appointment with a dentist — an oral surgeon, in fact — for that same day. I had been interested in writing about him ever since I had read his book, Be Here Now. An outsized paperback with the kind of hand lettering designed to coax the TV generation back to literacy, the book chronicled Ram Dass’ transformation from Harvard psychologist to spiritual leader of a fair proportion of the country’s youth. The problem was that Ram Dass wasn’t at all convinced that he wanted to be written about. When I called him he told me that he only meets with people who are “working on their own sadhana, their spiritual growth.” I said, who knows, maybe I qualified there. Finally he agreed to pick me up on his way south from the retreat to a lecture at the University of California at Santa Cruz, and we’d “see if we had any work to do together.” He pulled up two weeks later at noon on the dot — a tall, lean man with sparkling blue eyes and a thin face hidden behind a straggly beard, bald except for a wild fringe of salt-and-pepper hair that looked like organic brillo. He wore wire-frame glasses, a Grateful Dead T-shirt and cutoff jeans. With him in the van was a friend named Krishna Das, a soulful-looking young man who was also a devotee of Ram Dass’ guru.