Included a favorite shot (not my photo) of John and his wife Loie floating Desolation canyon in 1971. It is so much John . . . Powering the Sport Yak through the rough water .  Matt Wells 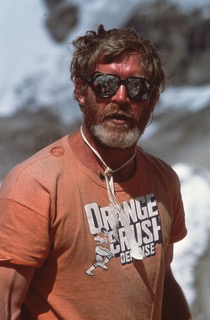 in all inherent beings

I had not heard about John passing until Thursday night.
I always think about John this time of year.  A few days ago was the 52nd anniversary of the day that he and Barry Corbet made the first ascent of Mount Tyree in Antarctica.  (This followed the first ascent of Vinson in December ’66).  Few can appreciate what a big deal climbing Tyree in 1967 was.  To this day there have only a handful of ascents.  And then there was the Hummingbird Ridge on Logan!  Everest International Expedition 1971, Nanda Devi and the Pamirs climbing exchange both of which Peter was a part of I think.
John’s positive attitude, humility stay with me.
Best to you all.
Wally Berg