Andy Warhol brought his camera with him everywhere he went — first a Polaroid, and then his treasured 35-millimeter compact Minox. “Having a few rolls of film to develop gives me a good reason to get up in the morning,” he said. In his lifetime, he produced nearly 130,000 images with the Minox alone, only 17 percent of which had been printed at the time of his death. Like other major artists of the 1960s, including Warhol’s contemporary, Robert Rauschenberg, he was creating a new visual language from a photographic vocabulary, long before the art world understood the significance of the medium. Warhol’s preoccupation with photography is a meaty subject for a show.

That show is “Andy Warhol Photography: 1967-1987,” which highlights the artist’s photographic output with a range of gelatin silver prints that record the most ordinary moments in his random daily activities, as well as his Polaroid portraits, still-lifes and nudes, filling both of Jack Shainman gallery’s Chelsea locations. Many of the 193 pieces have rarely, if ever been seen before. The handsomely installed exhibition begins with a sequence of framed Polaroid images of objects: a bunch of bananas; eggs in an egg carton; knives; a mélange of high heels. While these images echo product shots in retail catalogs, they are as refined in detail, composition and color as still-life miniatures.

In the 1970s, Warhol carried his Polaroid camera around as “his date,” as he called it, a tool that enabled him to engage his subjects while imposing distance at the same time. Among the dozen or so Polaroid portraits in the show, each distinct in gesture, color, and lighting, are those of Tina Chow, Joe Dallesandro, Bianca Jagger, Robert Mapplethorpe, Rudolf Nureyev and Lee Radziwill. “The Polaroid gets rid of everybody’s wrinkles, sort of simplifies the face,” Warhol noted. “I try to make everybody look great.” Nine Polaroid self-portraits of this ultimate icon of pop inscrutability are included, too, though Warhol is less kind — or more honest — in the pictures of himself. 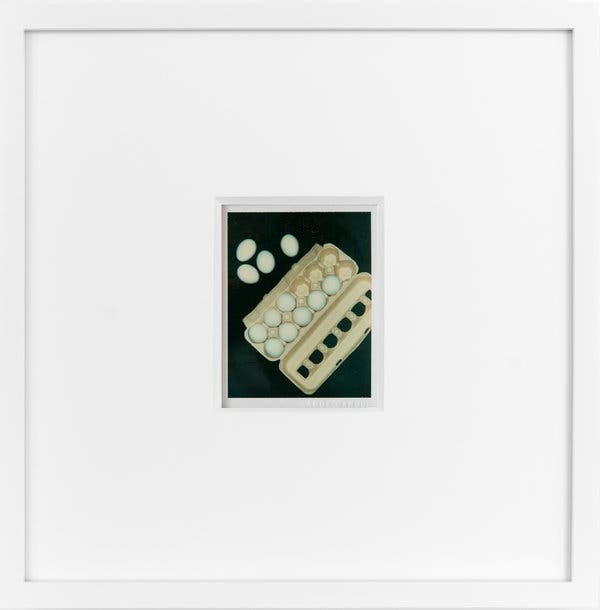 It is edifying to see a show of Warhol photographs isolated from the rest of his work, a compelling counterpoint to the monumental Warhol retrospective at the Whitney last year. The language of photography resides at the core of his practice. In fact, the photographic image was always hiding in plain sight throughout Warhol’s work, from the photo booth images he made as the basis for his early silk-screen portraits to the found press pictures of “Marilyn,” “Jackie” and “Liz’’ layered with colored inks on canvas, and the newspaper pictures at the foundation of his death and disaster paintings. He was fascinated by the optical clarity of the mechanical eye, even as he exploited photography’s role as a documentary requisite for fame.

Throughout the 1960s, as Warhol first gained recognition, photography was given scant regard as anything other than a graphic art, and yet, the march of the photographic image through the studios of the most prominent artists in that decade — including John Baldessari and Ed Ruscha — is undeniable proof that the upstart medium formed the backbone for so much artistic exploration in that era.

Writing in his journal, Warhol recounted telling a friend, “I didn’t believe in art; I believed in photography.” The remark stands on its own as “a kind of one-sentence manifesto,” Richard Meyer, the art historian, writes in “Contact Warhol,” a book he published with Peggy Phelan about the archive of Warhol contact sheets at Stanford University. “Warhol’s abiding belief in photography shaped both his creative enterprise and everyday life.”