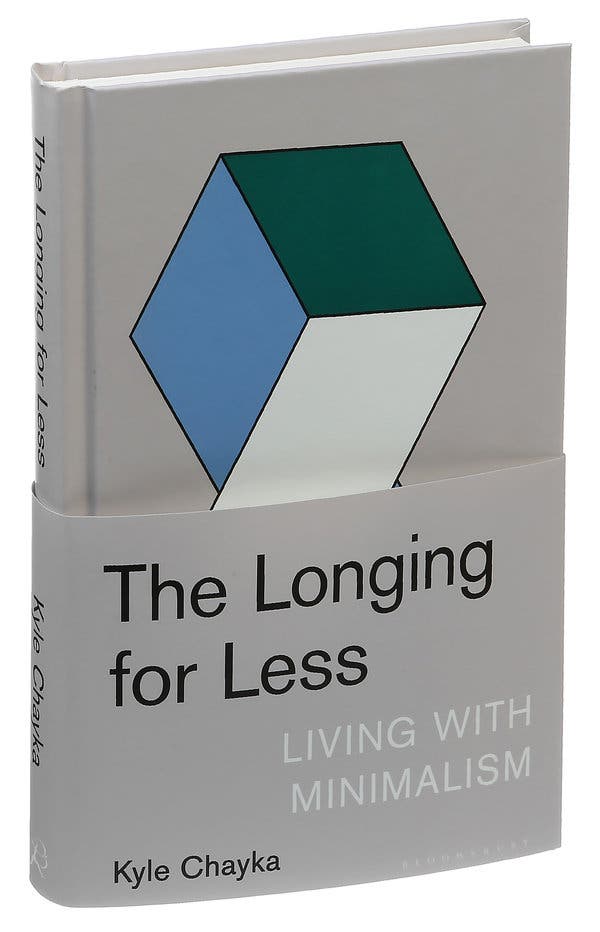 When you purchase an independently reviewed book through our site, we earn an affiliate commission.

As a millennial who graduated from college in 2010, in the lingering wake of the financial crisis, the cultural critic Kyle Chayka haltingly admits to being a minimalist, but only “by default.”

When he began writing “The Longing for Less,” he was put off by how minimalism had become commodified — a smug cure-all that countered late-capitalist malaise with self-help books by Marie Kondo and seasonal pilgrimages to The Container Store. His own minimalism was a consequence of living as an underpaid writer in New York: No basements and no closets meant no storage space for stuff.

But those two kinds of minimalism — sleek lifestyle branding and enforced austerity — don’t quite convey the enormousness of the subject Chayka explores in this slender book. Delving into art, architecture, music and philosophy, he wants to learn why the idea of “less is more” keeps resurfacing. He sees it as a shadow to material progress, a reaction to abundance, a manifestation of civilization’s discontents. He remembers growing up in a three-story house with a two-car garage in rural Connecticut and feeling mildly oppressed by “detritus scattered at random all over the place.”

The book itself is like an exercise in decluttering, as Chayka cycles through different ideas in order to find those he wants to keep. An inevitable section on Kondo doesn’t find much to commend in her approach, deeming it a force for homogeneity and, like comparable books in the genre, “an exercise in banality.” For Chayka, Kondo’s method clearly doesn’t spark joy.

More generative for him are the examples of artists who became known as Minimalists even as they disavowed the term. Experiencing their work sharpens his senses; in place of the dull hum of overstimulation, Chayka gains a heightened existential awareness. Walter De Maria’s “The New York Earth Room,” a pile of loose soil that takes up the expanse of a second-floor loft in SoHo, evokes vivid memories of the woods near Chayka’s childhood home. Donald Judd’s aluminum boxes in Marfa, Tex., suggest an “absolute freedom” that the author finds “implacable, aggressive and intimidating.” Chayka is moved when he considers how Agnes Martin created her ghostly grid paintings by paying assiduous attention to each and every line, repeating her actions over and over again, a process as mindful as prayer.

But the vulgarity of the real world keeps threatening to intrude. “Art becomes retail surprisingly quickly,” Chayka writes of Marfa, where Judd’s work turned the remote town into a place where upscale tourists can easily procure a vegan sandwich or a glass of rosé. Driving on the highway nearby, Chayka gets waved through an immigration checkpoint; his Marfa trip in 2018 coincided with the first reports that border guards a mere 60 miles away were separating migrant parents from their children.

President Trump, with his steaks and his golf courses and his gilded rooms, is like the anti-minimalist: opulent, ostentatious, overwhelming. Chayka, who mentions Trump at several points in the book, hopes minimalism might provide an antidote or a balm. He compares an exhibit of Martin’s paintings to a “visual spa treatment” after the November 2016 election; he recalls how the new administration’s “reckless enthusiasm” made him want to hide. “I had subconsciously started wearing all-gray clothing,” Chayka writes, as if he were trying to blend into the city’s unnatural landscape of concrete and steel.

What’s most striking about Chayka’s minimalist gestures is how frail they seem next to the larger upheavals that are taking place. And he knows this. Discussing the renunciatory philosophy of the Stoics and Henry David Thoreau, he discerns “a strategy of avoidance, especially in moments when society feels chaotic or catastrophic.” There’s a strain of this in contemporary lifestyle minimalism, which offers self-protection and retreat: “Your bedroom might be cleaner, but the world stays bad.”