DOWNIEVILLE, Calif. — The night before his first deadline, Carl Butz, California’s newest newspaper owner, was digging into a bowl of beef stew at the Two Rivers Café, the only restaurant open in town.

“Tomorrow I have to fill the paper,” he said with only mild anxiety. “The question is, will it be a four-page paper or a six-page paper?”

At 71, Mr. Butz is trim, with wire-rimmed glasses and a close-cropped silver beard, and he dresses in flannel shirts and cargo pants. Since his retirement and his wife’s death in 2017, he considered traveling — to England or Latvia, or riding the Trans-Siberian Railway. But here he was, a freshly minted newspaper proprietor, having stepped in at the beginning of the year to save The Mountain Messenger, California’s oldest weekly newspaper, from extinction.

The Messenger was founded in 1853. Its most famous scribe was Mark Twain, who once wrote a few stories — with a hangover, the legend goes — while hiding out here from the law.

Newspapers across America, especially in rural areas like here in Sierra County, have been dying at an alarming rate, and Downieville was about to become the latest “news desert.” The obituaries for the paper had already been written. Don Russell, the hard-drinking, chain-smoking editor with a blunt writing style who had owned and run the paper for nearly three decades, was retiring, and he seemed happy enough for the paper to die with his retirement.

And then one night Mr. Butz was watching “Citizen Kane” on cable and thought, I can do that. He made the deal quickly, paying a price in the “four figures,” he said, plus the assumption of some debts, without even looking at the books.

Still, Mr. Russell, an old friend of Mr. Butz’s, was a reluctant seller. “His position was, it’s a losing proposition and someone who’d want it would be crazy,” Mr. Butz said. “He called me a romantic idealist and a nut case. And that’s not a paraphrase, but a direct quote.”

For the residents of Downieville — and there are not many; the population is about 300 — who for generations counted on The Messenger to arrive every Thursday, through wildfires and power outages and economic booms and busts, Mr. Butz has become an unlikely local hero, a savior of a cherished institution.

“Thank God for Carl, he stepped in,” said Liz Fisher, a former editor of the paper who lives across the street from its office and runs The Sierra County Prospect, an online news site. “It was devastating for everybody that we were going to lose The Mountain Messenger.”

On a recent Wednesday morning, facing his first deadline, Mr. Butz was staring down a blank computer screen in the newspaper’s cramped two-room office above a beauty salon on Main Street. Mr. Butz, a fourth-generation Californian and a former computer programmer and labor economist for the state, readily admitted that he had no idea what he had gotten himself into, and it did not help to learn that the paper’s publishing software was from the mid-1990s.

One of the first things he said he would do after buying the paper was ban smoking in the office, but next to his keyboard was a package of unfiltered cigarettes and an ashtray.

“What is the lead story?” Mr. Butz asked.

“The front page is blank,” replied Jill Tahija, the paper’s only other employee, sitting at an adjacent computer.

Ms. Tahija, who has worked at The Messenger for 11 years, might properly be called the managing editor, but on her business cards it says, “she who does the work.” 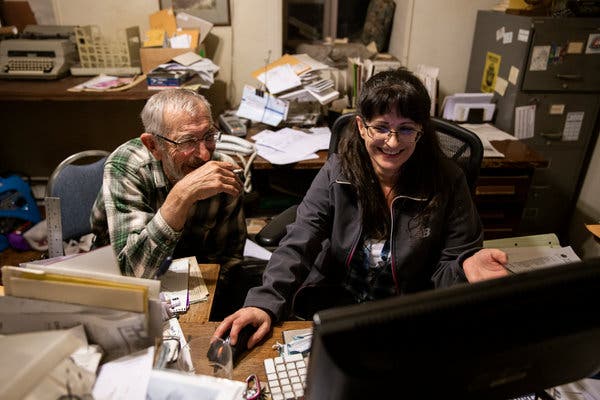