John Nichols has crafted elegant meditations on the environment and worked on his fair share of screenplays. But he can’t stop people from focusing on the whimsical cult favorite that he wrote 20 years ago. 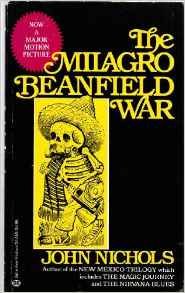 By MICHAEL HAEDERLE
SPECIAL TO THE TIMES

John Nichols makes it very plain: He doesn’t wish to be remembered for “The Milagro Beanfield War”–the book he has called “an albatross around my neck.”

Since “Milagro” appeared in 1974, Nichols has written books on the environment, elegant meditations on the damage people inflict on the natural world. He’s also done considerable screenwriting, including a rewrite of the Costa-Gavras film “Missing” and drafts of “Milagro.”

His latest novel, “Conjugal Bliss,” is a bawdy, farcical look at marriage and the bonds of fidelity that incorporates antic Nicholsean touches–and yet it is a stylistic departure from “Milagro,” Nichols’ whimsical account of the residents of a poor, mostly Latino northern New Mexico village uniting to thwart a rapacious land developer.

Still, two decades after its publication, “Milagro” remains his best-known book. Thanks to a fanatic cult following, it was even made into a 1988 film by Robert Redford. And these days, the ghost of “Milagro” has returned to haunt Nichols in the form of a 20th anniversary facsimile edition of the novel.

As he writes in an afterword to the anniversary edition, “The public has arrested my literary development in a ‘Milagro’ time warp.”

Marian Wood, Nichols’ longtime editor at Henry Holt and Co. (whom he describes as “the one useful critic I know”), agrees.

“Whoever reads a book of his wants that book again,” she says. “He’s disappointed his readers by not writing that book.”

At a coffeehouse near the University of New Mexico, Nichols is discussing his books, his career and the political convictions that have sustained him for the past 30 years.

Although he is 53, and his unruly mop of brown hair is streaked with gray, Nichols doesn’t seem all that much older than the graduate students hanging around campus, thanks to his work shirt, jeans and running shoes. In his nylon backpack is a spiral-bound notebook, in which he jots installments of his manuscripts.

Since September he’s lived in an off-campus apartment and teaches a creative writing course. He’s also working on a film project while his new wife, Miel Castagna, finishes her degree in Russian studies. Come May, they’ll return to Taos, N.M., the mountain village 130 miles north of Albuquerque where Nichols has lived since 1969.

Nichols says he hasn’t really missed Taos, which has been the setting for most of his books.

“Where my heart is, is in Albuquerque,” he says simply.

“Conjugal Bliss” is set in Taos, but the town serves mostly as a backdrop for the tale of Roger and Zelda, middle-aged newlyweds embarked on a passionate roller-coaster relationship.

It’s the second marriage for both. As narrated by Roger, the story traces the demands they make on one another amid the pleasures and pitfalls of the wedded state. Zelda is hugely jealous of Roger’s old girlfriends and demands his utter loyalty. Roger, leery of commitment, is unwilling to burn his bridges and leap with both feet into the new marriage.

Before long they’ve taken opposite corners. The ensuing apocalypse is vintage Nichols: Roger and Zelda come to blows, their house is trashed and a VW Beetle is riddled with gunfire. It’s not for nothing that Nichols has subtitled the book, “A Comedy of Martial/Marital Arts.”

“I thought ‘Conjugal Bliss’ was a real archetypal situation that I had experienced in my father’s (four) marriages and my own marriages,” he says. “My dad’s always told me that love and hate come out of the same emotional reservoir.”

A hilarious audio (cassette) if you can find it..

John Nichols was born in Berkeley in 1940. His father was a psychologist (now retired). His mother died when he was 2. Nichols at first lived with cousins, the Welds, in Smithtown, Long Island. (Cousin William Weld is now the Republican governor of Massachusetts.)

Nichols later moved around the East Coast, attending a prep school before entering Hamilton College in Upstate New York, where he played hockey and football and ran track.

After graduating he traveled a bit; published his first novel, “The Sterile Cuckoo,” and settled in New York. A trip to Guatemala in the spring of 1964 changed his life.

“Guatemala just blew my head off,” he recalls. “I’d never been in a country like that, where people were so impoverished, so exploited.”

Soon he was immersed in books that cast American overseas involvement in an ugly light and he acquired a new outlook on his homeland.

“It was American history as I’d never been taught it,” he says. “I came out of it really, really believing in the socialist ideal, which I still do today.”

Nichols, meanwhile, had established a literary reputation with “The Sterile Cuckoo” and his next book, “The Wizard of Loneliness”–both of which were made into movies–and had married the first of his three wives and started a family. (Son Luke lives in Taos, where he is a musician and builder of earthships–innovative energy efficient structures made of recycled materials. Nichols’ daughter, Tania, is a student at the University of New Mexico.)

“I wrote a bunch of novels,” he says, “but I was so involved in the Vietnam War and so angry at the American way that everything I wrote was drenched in angry, polemicizing left politics.”

No one wanted to publish the books he was writing.

Amid artistic turmoil and an unraveling marriage, he moved to Taos and began an unpaid stint with an alternative newspaper called the New Mexico Review. He wrote lengthy investigative pieces about land and water conflicts between rural mountain residents and developers, which provided the raw material for “The Milagro Beanfield War.”

With “Milagro,” he says, he “backed off on being so shrill or so obviously angry. ‘Milagro’ was a famous last stab at keeping a career alive. When that was published, I felt it wasn’t effective because it was too funny.”

Despite unspectacular sales, “Milagro” became the first installment of Nichols’ “New Mexico Trilogy,” which continued with the darker, more political “The Magic Journey” (1978) and the farcical “The Nirvana Blues” (1981). In 1987, he weighed in with “American Blood,” an unrelentingly bleak and violent anti-war novel that touched the raw nerve of U.S. involvement in Vietnam.

Meanwhile, “Milagro’s” mythic, romantic qualities found a wide audience (to the extent that today there is a “Milagro” bed-and-breakfast and a “Milagro” art gallery in Taos). Nichols acknowledges that the book resuscitated his career but fumes at being introduced as the guy who wrote “The Milagro Beanfield War.”

Ironically, editor Wood says that when she received the “Milagro” manuscript in 1973, she knew it was unfashionable.

“Publishing John Nichols in the ‘70s was very much against the grain. It was political fiction and it was filled with unpronounceable names. It was set in a boondock and wasn’t ‘coastal.’ It was in quite a broad-swath style. It was trashed.”

Nichols writes on a manual typewriter or in longhand, turning out a first draft of a manuscript in as little as five weeks, then rewriting “dozens of times.”

“I don’t pause to think about literature,” he says. “I just blam. In fact, my friend Mike Kimmel calls it the blam method of writing.”

Nichols says he tries to forget a book as soon as it’s finished and turns to his next project.

Nichols claims to have relinquished the dream of writing what he considers a great work.

“I’ve realized what the criteria are to produce something special–it’s really hard,” he says. “I’m not sure if I have the skill or the drive to do that, although I’m real proud of what I’ve done. It’s an interesting body of work.”

Although he looks fit, even youthful, Nichols is afflicted with a host of heart ailments.

For 20 years he’s coped with tachycardia–a rapidly beating heart–and atrial fibrillation, a condition in which the heart beats irregularly. He’s tried different drugs to control the problems but hates their side effects. Mitral valve prolapse is another problem, with doctors suggesting open-heart surgery to replace the valve.

He spent much of the winter battling endocarditis, a strep inflammation of the heart sac. He was hospitalized and dosed with antibiotics, which brought the infection under control. (Nichols also has arthritis, is awaiting a double-hernia operation and copes with Meniere’s disease, an inner-ear disorder.)

Nichols has bestowed his heart condition upon a number of his fictional protagonists, but he warns against assuming that those characters are him.

“I’ve used it in different books because it’s handy,” he says. “People are always curious about whether my books are autobiographical. I can’t understand that question. What isn’t autobiographical in a writer’s life?”

Meanwhile, this writer’s life grows ever busier–even as he yearns for greater simplicity.

He’s finishing a script for director Ridley Scott, working on his next book, and trying to keep up with his reading and correspondence.

That leaves less time for beloved pastimes, such as fly fishing in the Rio Grande gorge, grouse hunting in the Sangre de Cristo Mountains, nature photography and playing flamenco guitar.

Sometimes, he says, it feels “like life is sort of a washing machine–you’re just tossing and tumbling around.”