John Szarkowski was about 13 when he saw an image by Dorothea Lange that “enormously impressed” him. After he had become the powerful director of photography at the Museum of Modern Art, he would recall that he took it to be a “picture of the hard-faced old woman, looking out of the handsome oval window of the expensive automobile with her hand to her face as though the smell of the street was offending her, and I thought, ‘Isn’t that marvelous?’ That a photographer can pin that specimen to the board as some kind of exotic moth and show her there in her true colors.”

A quarter of a century after his initial encounter with the photo, working in 1965 with Lange on his first one-artist retrospective at MoMA, he read her full caption for “Funeral Cortege, End of an Era in a Small Valley Town, California,” and realized that the fancy car belonged to an undertaker, and the expression he took for haughtiness was grief.

The wry confession of his mistake, which Szarkowski made in 1982 to an interviewer, is not mentioned in “Dorothea Lange: Words and Pictures,” which opened Sunday at MoMA. But it illustrates the curatorial theme: Lange’s pictures require verbal commentary to be read legibly.

Curiously, though, the strength of Lange’s photographs at MoMA undercuts the exhibition’s concept. With or without the support of words, Dorothea Lange (1895-1965), created some of the greatest images of the unsung struggles and overlooked realities of American life. Her most iconic photograph, which came to be called “Migrant Mother,” portrays a grave-faced woman in ragged clothing in Nipomo, Calif., in 1936, with two small children burying their faces against her shoulders, and a baby nestled in her lap. It is one of the most famous pictures of all time. 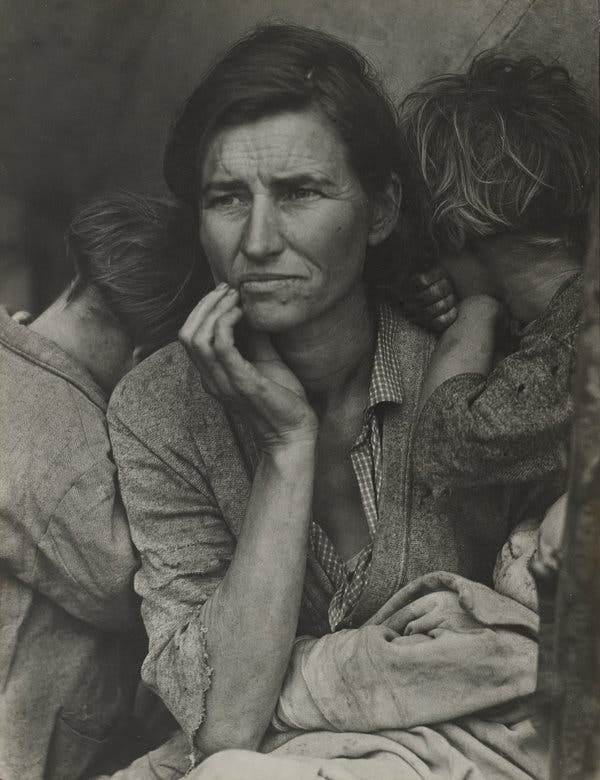 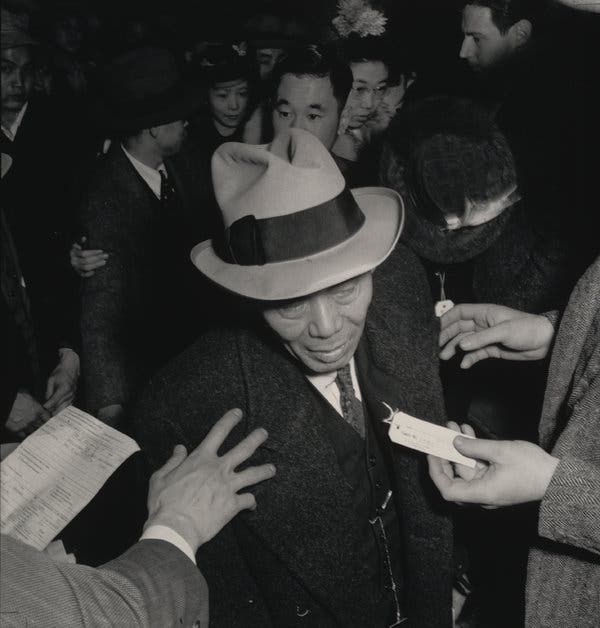 Yet Lange was not simply a Depression photographer. As this revelatory, heartening exhibition shows, she was an artist who made remarkable pictures throughout a career that spanned more than four decades. The photos she took in 1942 of interned Japanese-Americans (which the government suppressed until 1964) display state-administered cruelty with stone-cold clarity: One dignified man in a three-piece suit and overcoat is wearing a tag, like a steer, while disembodied white hands on either side examine and prod him. Her prescient photographs of environmental degradation portray the human cost of building a dam that flooded the Berryessa Valley near Napa. Her empathetic portraits of African-American field hands shine a light on a system of peonage that predated and outlasted the 1930s.

Nevertheless, her fame rests largely on the indelible images she made, starting in 1935, as an employee of the Resettlement Administration and its successor, the Farm Security Administration, both under the leadership of Roy Stryker. Lange endured a fractious relationship with Stryker, who seemed deeply discomfited by a strong-minded woman. He fired her in 1940, saying she was “uncooperative.” To his credit, however, he always acknowledged that “Migrant Mother” was the key image of the Depression.

Seeking a deeper understanding of the economic crisis, Lange and her collaborators in the field interviewed her subjects, and she incorporated their words into her captions. She was the first photographer to do that systematically. The show’s curator, Sarah Hermanson Meister, who drew from the museum’s collection of more than 500 Lange prints, includes many of the captions in the wall labels, in an installation that is patterned after Szarkowski’s 1966 Lange show. (The artist died of esophageal cancer before it opened.)