MARFA, Texas — When Landrie Moore was looking for a venue for her destination wedding, she knew she wanted a space that really reflected life in this small, remote desert town.

Her guests would be coming from as far as Ecuador and England, and Ms. Moore, 35, who works for a boutique hotel firm, hoped to provide a memorable and authentic experience for those travelers. When you visit a new place, she said in a phone interview, “you want to feel like a local.”

Which is why she decided to get married mere feet from the office of The Big Bend Sentinel, the region’s oldest newspaper (where I worked as a reporter in 2014 and 2015).

Ms. Moore’s wedding, in June, was the first of five held last year in the Sentinel, a cafe and cocktail bar in the newspaper’s newly renovated office building. The space is perhaps the most visible sign that The Big Bend Sentinel is under new ownership: Maisie Crow and Max Kabat, two transplants from New York, took over last year from Robert and Rosario Halpern, the paper’s publishers of 25 years.

“We kind of saw us in a way,” Mr. Halpern said of the couple.

“Buy a newspaper?” Mr. Kabat, 37, recalled thinking when the Halperns first approached him and Ms. Crow about a potential sale. “What are we, idiots?” Their background is in consulting and documentary filmmaking. (The New York Times is a producer of a forthcoming film by Ms. Crow.)

Since 2004, nearly 20 percent of local papers in the United States have folded or merged, according to a 2018 study by the Hussman School of Media and Journalism at the University of North Carolina. In many cases, publishers have been replaced by a narrow network of large investment groups that have acquired hundreds of failing newspapers.

But Marfa is no ordinary town, and its newsweekly has been a pillar of the community for nearly a century — long before Marfa became cool. The Big Bend Sentinel’s pages are pasted up with major issues of the day (the death of Antonin Scalia, the Supreme Court justice, on a nearby luxury ranch, for example, and the possibility of a border wall just 60 miles away) alongside valedictorian announcements, photo spreads of homecoming events and advance coverage of the town’s many festivals.

Before Mr. Kabat and Ms. Crow took over, the paper ran solely on an ad sales and subscriptions. “It was able to sustain itself on a shoestring, but we wanted to expand the potential,” Ms. Crow, 38, said. They hoped to bring locals closer, physically, to the institution covering their hometown.

So they bought the building previously occupied by Padre’s, a dive bar that went out of business in 2016, and before that, a funeral home, and began renovations.

“We had to sage the whole place,” said Callie Jenschke, whom the couple hired to handle interior design.

She recognized that there was a familiar Marfa aesthetic that tourists had come to want and expect — “a nomadic austerity mixed with the warmth of the desert,” in her words — and married that with Scandinavian influences, including concrete floors and Hans Wegner chairs, while preserving the original adobe brick and plaster walled facade.

All the furniture had to be movable and multifunctional, Ms. Jenschke said, “because they didn’t really know how it was going to be used.” It could be a co-working space, Mr. Kabat and Ms. Crow thought initially, then decided a subscription model would go against their goal of inclusivity.

Instead, they landed on a cafe/bar where locals could work and tourists could recharge. They would rent the kitchen space to local cooks to serve food throughout the day. And though they wouldn’t make money off the food itself, they could turn a profit on drinks. Eventually, there would be requests to rent the space for private events.

On a visit in the fall, the morning crowd lined up for coffee, served in hand-thrown clay mugs and with the option of organic oat milk. By early afternoon, the bar offered watermelon ranch waters for happy hour. Newspapers were scattered on the surfaces of the space. 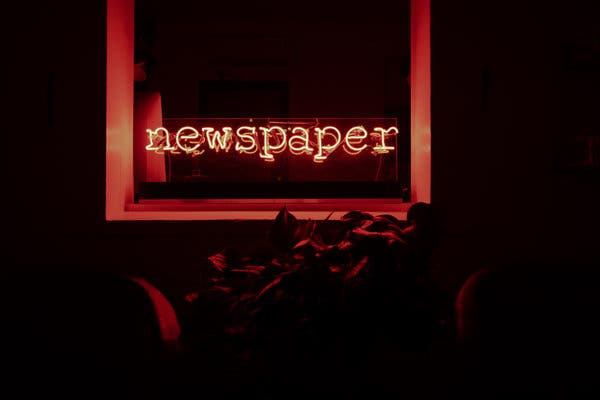 Next door, the Big Bend Sentinel’s staff squeezed into a dimly lit room just a fraction of the Sentinel’s size. Now and then, the two full-time reporters dropped into the cafe to refill their mugs.

A relic of the old office remains: a neon sign spelling out “newspaper.” In the evenings, when the light is turned on, the office glows red from within.

Sometimes the reporters work out of the Sentinel, which functions as a kind of public square. “It’s a great way to keep my finger on the pulse and get new leads and find stories,” said Abbie Perrault, 27, the managing editor.

For legal reasons, Ms. Crow and Mr. Kabat have decided to keep the businesses separate on paper. In Texas, any business with a Texas Alcoholic Beverage Commission license for serving alcohol is subject to warrantless searches by law enforcement, and they didn’t want to take that risk with the newsroom.

Still, the couple sees the Sentinel as a natural extension of the paper. During editorial meetings, the staff discusses greenlighting private events. When a political candidate asked to rent the space to host a meet-and-greet, they declined, concerned it might violate the ethics of the newspaper.

Since Ms. Crow and Mr. Kabat took over, they have expanded the newspaper’s digital platform, which has seen a 7 percent increase in traffic, Mr. Kabat said, and broadened its photographic coverage. At the newspaper’s sister publication, The International, which the couple also owns and which serves the largely Spanish-speaking neighboring border town of Presidio, every article is now translated into Spanish. They added a crossword puzzle and Sudoku to both papers, too.

The newspapers still sell ads, which account for the majority of revenue. But with additional income from private events and day-to-day drink sales, the publishers have been able to keep yearly subscription costs steady: $50 for area residents and $60 for anyone outside.

“If people come in and buy a coffee and buy something from our shop, rent the space, buy a cocktail, whatever it is, their dollar isn’t just going to that,” Ms. Crow said. “Their dollar is going to support something larger.”