That story, a hemispheric one, begins in Mexico in the 1920s. After 10 years of civil war and revolution, that country’s new constitutional government turned to art to invent and broadcast a unifying national self-image, one that emphasized both its deep roots in indigenous, pre-Hispanic culture and the heroisms of its recent revolutionary struggles.

The chosen medium for the message was mural painting — monumental, accessible, anti-elitist, in the public domain. And three very differently gifted practitioners quickly came to dominate the field: Diego Rivera, José Clemente Orozco and David Alfaro Siqueiros: “Los Tres Grandes” — “the three great ones” — as they came to be known among admirers.

Many of those admirers were artists in the United States. Some had heard word of a lush, affordable, artist-honoring tropical utopia, and traveled south to experience it for themselves. Others, alert to social inequities rampant under United States capitalism — to be laid bare by the Great Depression — wanted to make art a tool for social change and took the Mexican revolutionary experiment as a model.

For all parties, the model was an exhilarating one, and the bright pink walls of the exhibition’s opening gallery suggest a fiesta atmosphere, as do the paintings gathered there: Alfredo Ramos Martínez’s 1929 image of an itinerant flower vendor bending under her load of calla lilies; a 1928 painting by Rivera of Oaxacan dancers in orchidaceous gowns; and, from the same year, a scene, in Rivera’s volumetric, smooth-brushed, Paris-trained style, of women harvesting cactus by the American artist Everett Gee Jackson.

Jackson (1900-1995), who was born in Texas and trained at the Art Institute of Chicago, made an art jaunt to Mexico in 1923 and stayed four years. He saw Rivera’s mural work in Mexico City and created his own variation on what had already become a local “national” style. There he also met Anita Brenner, a Mexican writer of Latvian Jewish descent, who was the fulcrum of a lively international community, and whose widely read 1929 book “Idols Behind Altars” — there’s a copy on display — introduced North Americans to the history of Mexican culture, from pre-Columbian times forward.

Turn a corner into the next gallery and you find work from around the same time but on overtly polemical themes. It was important for a nation that identified itself with populist struggle to keep the memory of that struggle burning, and art was on the job. You see this in a large charcoal painting study by Rivera of the firebrand revolutionary Emiliano Zapata trampling an enemy underfoot. And in an inky Siqueiros portrait of the same leader, looking as blank-eyed as a corpse. And in a spiky, depressed Orozco painting of the peasant guerrillas known as Zapatistas, their figures as stiff as the machetes they carry, locked in a grim forced march. 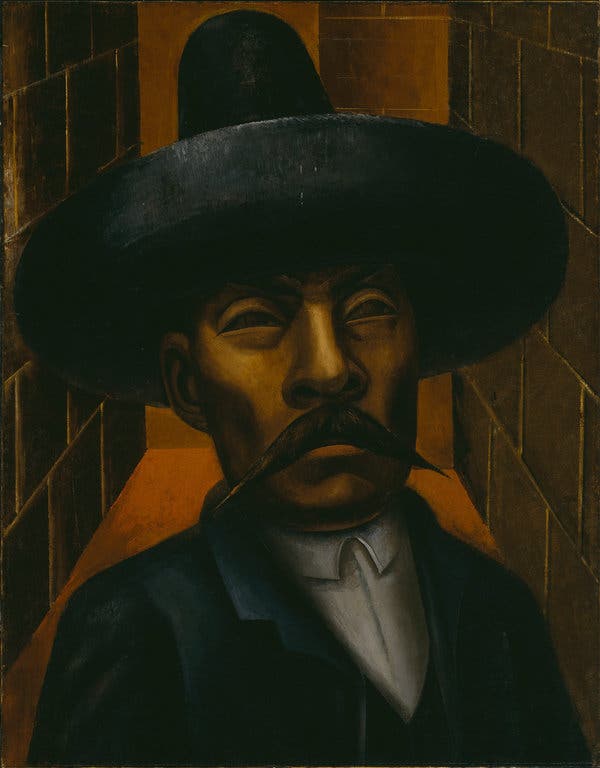 By the time these pictures were made in 1931, two of the artists were working primarily in the United States; the third would arrive the next year. There were reasons for this northern influx of émigré talent. With a change of leaders in Mexico, mural commissions had dropped off, and far-left politics — Rivera and Siqueiros self-identified as Communists — had become less welcome. Something like the opposite was true in the United States, where young artists radicalized by the Depression were eager to explore the possibilities of social consciousness-raising public art. To work with these masters was a dream come true.

Orozco came first, to New York in 1927. There he taught easel painting and printmaking to a rapt cohort of local artists before moving on to California to execute a mural commission for Pomona College in Claremont — a 1930 fresco called “Prometheus” that the teenage Jackson Pollock, then living in Los Angeles, saw and never forgot. 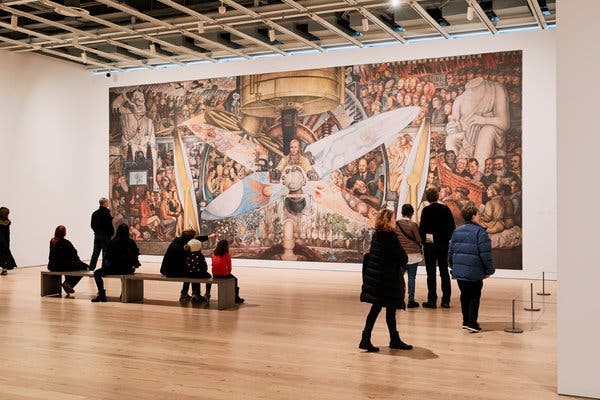