When last we encountered Jesus Quintana, the bumptious Latino bowler was going door-to-door in his new neighborhood, meekly sharing that he was a registered sex offender. That was in 1998, the year that the Jesus (John Turturro, at his most inspired) cameo-ed in Joel and Ethan Coen’s feverishly adored stoner noir “The Big Lebowski.”

Turturro reprises the role in the farce “The Jesus Rolls,” opening Feb. 28, Turturro’s 63rd birthday. The film — which he wrote and directed with the Coens’ blessing — is loosely based on Bertrand Blier’s 1974 movie “Going Places” in which two French knuckleheads steal cars, grope women and boink themselves into existentially richer moments of being. I spoke with Turturro about resurrecting the Jesus, zealous disciples and more. Here are excerpts from the conversation.

The Jesus of “Lebowski” has just served six months behind bars for what a rival bowler calls “exposing himself to an 8 year old.” Ethan Coen told me that after he and his brother conceived the Jesus in a “purple onesie,” it was a short step to making him a pedophile.

I never dwelled much on that aspect of The Jesus. I was more embarrassed by the codpiece Joel and Ethan made me wear when I went door-to-door.

Pedophilia is a real thing, a horrifying thing. But “The Jesus Rolls” is a comedy, so I said let’s address the crime and move on. A flashback in the opening scene reveals it was all a big misunderstanding involving the Jesus’ penis.

How big a misunderstanding?

Big enough to get him arrested.

Another distinguishing feature of the Jesus is his voice, which is gentle and disarmingly high.

I first used the voice in Reinaldo Povod’s play “Nijinsky Choked His Chicken” at the Public in 1987. Rei’s father had just been released from prison, and that’s how he spoke.

You played a Latino child molester in that, too.

Yeah. Joel had seen me in “Nijinsky,” and he suggested letting that character bleed into the Jesus.

Part of what made the Jesus so endearing were his extravagant gestures. He taunted opponents by shimmying and strutting and backpedaling like a cocky prizefighter.

A lot of those moves were modeled on Muhammad Ali’s, especially his psych-out job on Sonny Liston.

Ethan says you got more mail and, alarmingly, more marriage proposals from the role than any other and also, understandably, more room on the subway.

I got all kinds of women letters, men letters. Weird ones, racy ones. “I love your body.” “I love your outfit.” “I’d love to take your outfit off.” I made “Lebowski” after returning to the States from Europe, where I filmed “The Truce.” I played the writer Primo Levi returning home to Italy from Auschwitz after World War II, and I’d lost a lot of weight for the part — so much that a couple of New York gossip columnists speculated that I was dying. A Fleet Street hack even called my mother in Queens and asked, “Is it true your son has brain cancer?” A friend suggested that I hold a press conference with my head bandaged and thank God for my miraculous recovery.

“The Jesus Rolls” nods toward “Lebowski,” but it’s not a sequel. Basically, you’ve inserted a “Lebowski” character into “Going Places” and updated that story to the present day. How did you decide to hitch a ride on a 46-year-old road movie about aimless joy riders whose entire objective is to keep driving until the tank is empty?

“Going Places” made a tremendous impression on me. I was 19 and in college when I saw the movie at a second-run theater in upstate New York. It wasn’t long after the student riots in Paris, a time of hippies and revolutionaries, and the film was a celebration of freedom in a world of bourgeoise hypocrisy. I was shocked, not just by what I was seeing onscreen, but by my laughter at the shocking things I was seeing. I remember thinking, “Holy mackerel!” 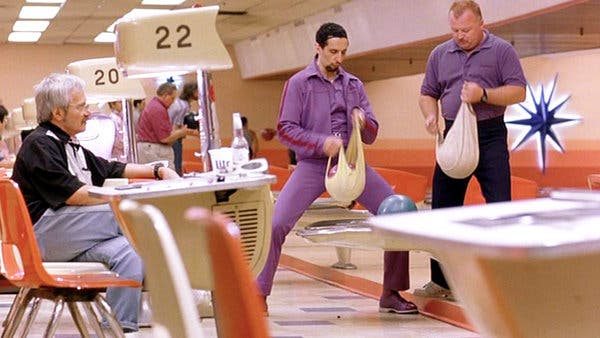 The original title of “Going Places” was “Les Valseuses,” French slang for testicles. The brutish leads — Gérard Depardieu and Patrick Dewaere — treated females like walking vaginas who existed solely to service mankind. Roger Ebert condemned the film for what he called its “palpable and embarrassing” hatred of women.

And yet Pauline Kael was a big champion of “Going Places.” She saw the Depardieu and Dewaere characters as guileless raw innocents for whom almost everything backfires. To me, they were like cave men — crude, misogynistic and at times a little rough — but they became generous cave men. They seemed to genuinely care for Miou-Miou, their lover and companion. They also cared about the little band of outsiders they formed with a weathered convict played by Jeanne Moreau, and Isabelle Huppert, a teenage runaway. The generosity of the powerless appeals to some rebellious part of me.

In “Jesus Rolls,” you stand in for Depardieu, the mindless mastermind, and Bobby Cannavale is your partner in crime. Audrey Tautou takes the place of Miou-Miou and Susan Sarandon replaces Moreau. How closely did you hew to the “Going Places” screenplay?

I intentionally left the screenplay way behind. As a writer and actor it’s important to remember you’re not those characters, that’s not your language, you’re not that age. After rewatching “Going Places,” I transposed the narrative and read Blier’s novel, which is filthy, broader in its concerns and the basis of the film. Then I asked him for permission to repurpose the book and make the two drifters a few decades older, so that I could play one of them. My pitch was simple: those guys are now middle-aged and they’re still idiots. And Blier said, “O.K., as long as they’re stupid.”

The Coen brothers are forever retelling the story of Job. The question isn’t whether God exists, but what He’s up to. Do we have a friend in the Jesus?

I really like religious movies, especially if they’re about nuns. I was thinking of calling this picture “Jesus, Mary and Peter” because the three principals do good deeds. They solve problems. They don’t hurt anybody. Even when they steal a car, they bring it back. Maybe in 20 more years I’ll make another movie about the Jesus. As we all know, he already came back once.

“Hours after being released from prison for good behavior, Jesus Quintana (John Turturro) reunites with his best friend and fellow underachiever Petey (Bobby Cannavale),” the film’s synopsis states. “In the first in a series of rapidly escalating bad decisions, they steal a vintage car parked in front of an upscale salon and hit the road for a no-holds-barred joyride — until the car’s gun-toting owner (Jon Hamm) catches up with them, wounding Petey. Fleeing the scene with fiercely free-spirited shampooist Marie (Audrey Tautou), Jesus and Petey continue their adventure in a series of stolen cars, cementing their partnership with an epic petty-crime spree and a three-way romance.”

That aforementioned vintage car is a Plymouth Fury, and in this 90-second clip from The Jesus Rolls, Jesus and Petey use the vehicle to pick up a just-released-from-prison character played by Pete Davidson. “Swedish police used to use that, and they never die,” Davidson’s monotone ex-con says of the Plymouth Fury to the two strangers in bowler garb.

The Jesus Rolls, made with the Coen brothers’ blessing, was written and directed by Turturro and implants the Lebowski character into a film that is a remake of the 1974 French comedy Les Valseuses (Going Places).