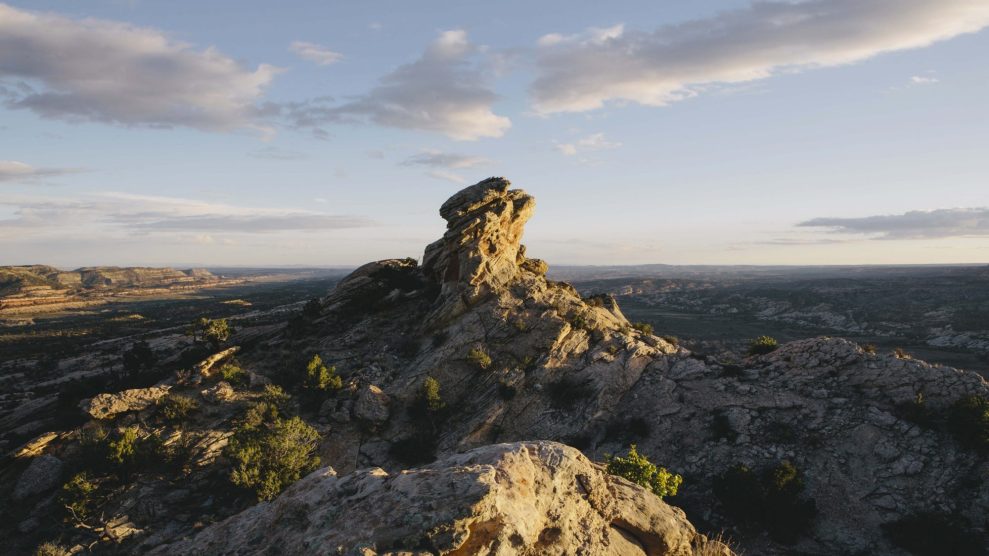 This piece was originally published in High Country News and appears here as part of our Climate Desk Partnership.

Here’s what those plans do and do not contain:

The plans apply only to the lands within the reduced monuments, not to the combined 2 million acres that President Donald Trump cut from them by executive fiat in 2017. For both monuments, the administration picked, out of a handful of alternatives, the plans that offer low protections.

Within both monuments’ diminished boundaries, the plans open the door to more grazing as well as to chaining, in which bulldozers drag chains to uproot vegetation. Rights of way for development will be easier to introduce, and there are fewer restrictions on target shooting. Land outside the current boundaries will be managed by standard Bureau of Land Management regulations—which the Trump administration has slashed for three years.

Nothing that specifically incentivizes energy development

Oil, gas and mine leases remain banned with the monuments, but are now available in the excluded lands. Following the 2017 executive order, a number of new hardrock mining claims for uranium and other minerals appeared. But oil and uranium prices are currently low, so there’s little economic incentive to develop now. That could change: The president has talked of implementing a uranium quota to encourage domestic mining.

Even less input from tribes

Tribal members, who make up a majority of the county where Bears Ears is located, have long pushed for greater protection for the site, which is profoundly important to Southwestern tribes. Five of them—the Ute Mountain Ute Tribe, Navajo Nation, Ute Indian Tribe of the Uintah Ouray, Hopi Nation and Zuni Tribe—formed a coalition that informed the Obama administration’s monument creation.

Tribal representatives say they have been cut out of the Trump administration’s planning for the reduced Bears Ears, however. A recent meeting of the committee that makes management recommendations to the BLM did not have a single Indigenous representative present, local radio station KUER reported. “We’re seeing no meaningful engagement of the tribes by the agencies,” said Natalie Landreth, an attorney for the Native American Rights Fund, which represents the Hopi, Zuni and Ute Mountain Ute tribes in a lawsuit.

The plan acknowledges a tourism spike for Bears Ears. For the still-protected monument lands, local advocates describe a lack of basic infrastructure to direct visitors, or ranger stations to educate them—even signs to tell them where they are, and not to disturb culturally important sites. Instead, the management plan recommends visitor “self-regulation.” “Bears Ears is being run by Google maps right now,” said Josh Ewing, director of Friends of Cedar Mesa, the nonprofit that—in the absence of federal infrastructure—runs the only visitor center.

The plan claims to maintain cultural resource protections, but it’s not clear the administration even knows what it is claiming to protect. An environmental impact statement from last summer admits that only 8 percent of the BLM-administered lands in the Shash Jáa unit—one of the two units that make up the reduced monument—have been surveyed for cultural resources. Within this small slice, an archaeological site was found every 8 acres, on average.

Federal presence on the ground is already minimal, and the plan wouldn’t add more right away. The agencies say they intend to develop recreation guidelines, but the plans do not specify when. And even if the plans were in place today, they would apply to the 1.1 million acres cut from the original monument.

Grand Staircase has been a monument for more than two decades. Now, with the size reductions, grazing and mineral development are allowed on lands that had been off-limits since 1996. Within the monument, and in addition to the possible chaining and under-regulated recreation, casual fossil collection is now permitted in one of the country’s richest paleontological areas. Uncertainty about the new boundaries encourages abuse: Stephen Bloch, legal director of the Southern Utah Wilderness Alliance, a local nonprofit, said the complete lack of signage causes “so much confusion” between the monument’s boundaries and the excluded lands. Local members of his group report off-road trails spreading into illegal areas.

No free pass on the legal front for the Trump administration

Before 2017, the Antiquities Act had never been used except as a one-way use of executive branch power to designate national monuments. By claiming that the act works both ways—to both create and reduce monuments—Trump opened up a legal question. Several lawsuits, including Landreth’s, have been consolidated into one legal challenge, which argues that Trump unlawfully stripped monument status from Bears Ears and Grand Staircase.

Should the courts side with the administration, the Utah monuments would remain their reduced size, and the entire substance of the Antiquities Act would be called into question. If, however, the courts rule that the shrinkage was illegal, the original boundaries would be restored.