Police on Long Island were searching Wednesday for the photographer Peter Beard, known for creating elaborate collages from documentary images of Africa, after he disappeared on Tuesday afternoon from his home in Montauk, N.Y.

Mr. Beard, 82, has dementia, according to the East Hampton police, who described him as “vulnerable” and potentially in need of medical attention. On Wednesday afternoon, dozens of police and firefighters, using dogs, drones and thermal imaging equipment, combed the area around Mr. Beard’s waterfront property, where he maintains his studio and lives with his wife, Nejma Beard, who manages his career. 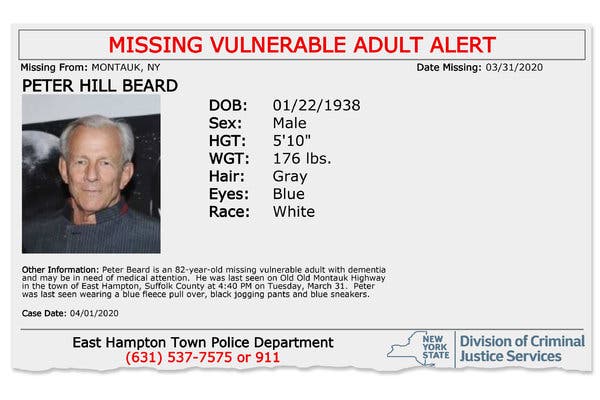 Although photographs are his main medium, Mr. Beard incorporates painting, drawings, natural objects and written text in his works.

Jeff Rosenheim, curator in charge of the Metropolitan Museum of Art’s photography department, described Mr. Beard as “a maximalist who lives life to the fullest.”

“We all live life chronologically but we keep our diaries out of our visual art, if we are artists,” he said, “but Peter has always blended his into a whole.”

Of his photographic art works, many of which chronicle the beauty and harsh reality of the natural world, Mr. Beard told The New York Times in 1997, “I think of them like an accumulation of petty and futile memories put down on paper, collaged, photographed, and worked on.”

Mr. Beard’s work is sold at several major auction houses and the Fahey Klein Gallery. In October 2017, a silver gelatin print collage of orphaned cheetah cubs near Nyeri, Kenya, sold for $672,500, exceeding estimates that it would fetch $300,000 to $500,000.